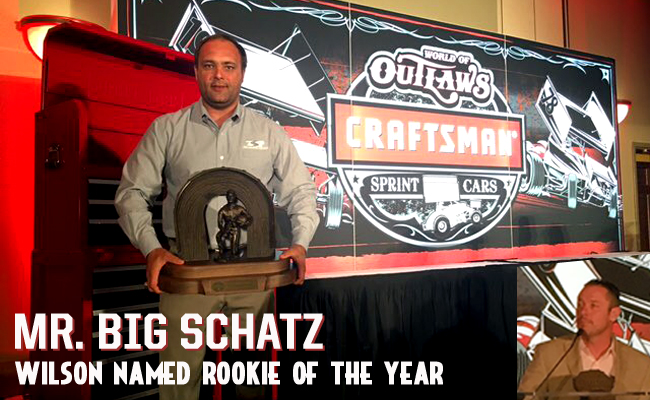 Wilson named Rookie of the Year

The 2016 World of Outlaws Craftsman® Sprint Car Series season came to an end with the completion of the Bad Boy Off Road World of Outlaws World Finals and the annual Awards Banquet. This year’s banquet was full of laughter and a few tears, with the Championship going to Donny Schatz.

Over the course of the season the Outlaws traveled to nearly 60 different tracks across the country, visiting the most beautiful and scenic places the United States has to offer — from large cities in the desert, to small towns in the middle of nowhere. The Outlaws continued to face the best drivers and crews in the industry week in and week out, weekly including many local legends. Being on the road and away from home and family is not always the easiest thing to do, but the drivers continue to chase their dreams at the cost of feeling a little homesick from time to time.

Throughout the season, Donny Schatz took home a lot of hardware, claiming wins in 25 races, 60 top fives, 77 top 10s, and five Quick Times. The award banquet was no exception as he took home a few more pieces to add to his collection from the 2016 season: a trophy, a championship ring, a new Craftsman Tool Chest, and a check for $150,000. Schatz won his eighth World of Outlaws Craftsman Sprint Car Series Championship, as well as the KSE Racing Products Hard Charger Award and the VP Racing Fuel Award.

“It’s very overwhelming,” said Schatz. “Twenty times I’ve stood [on the stage at the award banquet]. I would’ve never guessed it. In 1997 I came out here, and I don’t know what I was thinking. I was racing Paul McMahan, and Paul’s a badass. Really, I shouldn’t have even had a chance at it, and somehow that night I won Rookie of the Year. To this day it’s still my most prized possession. I thought I won the world. I didn’t care who won the championship because I won Rookie of the Year. Winning that first year was the most rewarding feeling I’ve ever had. So congratulations to Greg Wilson [2016 Rookie of the Year]. I promise you it gets better from here.”

“The organization that Tony Stewart has built and continues to refine is nothing short of incredible,” said Schatz. “It’s a huge honor to be a small part of this team’s success. Ron and Livian Shaver [Shaver Specialties Racing Engines] and Jack and Bonny Elam [J&J Auto Racing], I’m proud to call you guys friends. I am very grateful that you guys go over and above with your effort to build the best products you can for us.”

Greg Wilson received the 2016 Rookie of the Year Award after he and his team explored a lot of uncharted territory in his first full season running with the World of Outlaws. Wilson proved he is a hard charger, willing and able to fight his way through the pack. Though he often started a feature in the back of the field, he would finish among the top 10. Clearly, Wilson was able to make adjustments throughout the season, and on any given night at the track gave it all he had to charge the front line.

During Wilson’s acceptance speech he compared this year to the movie “40 Year Old Virgin,” as he has long awaited his moment in the racing industry, and winning this award made it all worthwhile. “This is the most kickass thing you can do. I wouldn’t trade this experience for anything,” said Wilson.

The banquet ceremony began with the The Ted Johnson Memorial Award for Outstanding Contribution to Sprint Car Racing, which was given to the Lanny Edwards family. Edwards, who passed away this past September, was honored for his tremendous contributions to the sport. The room reminisced about how Edwards would shake a driver’s hand after a bad night of racing and slip him a 100-dollar bill to help him out. He was a very generous man with a big heart for racing.