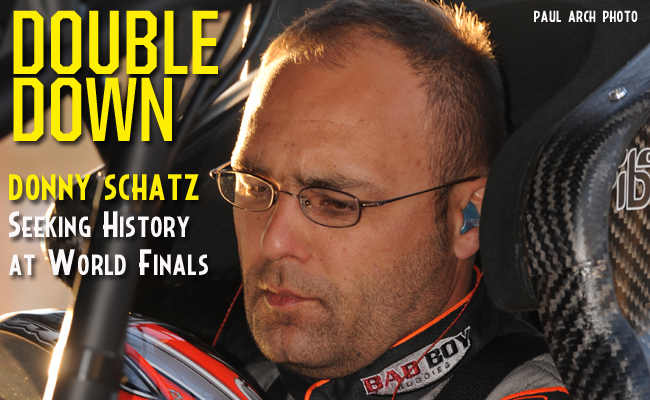 CONCORD, N.C. – Oct. 24, 2016 – Donny Schatz is not a one-trick pony in the World of Outlaws Craftsman® Sprint Car Series. The seven-time sprint car series champion found a new challenge in the Outlaws’ late model series, and when he grabbed the reigns of the 2,300-pound iron horse, reality hit him for the first time since he first wheeled a 360-sprint car 24 years ago.

“[Late Model racing] is like the horse you get on that kicked you off,” said Schatz, who makes appearances in the World of Outlaws Craftsman® Late Model Series. “You never let the horse win. You’re going to get on it, you’re going to kick that horse and show it you can ride it.”

The initial setback does not deter Schatz from competing in both series during the Bad Boy Off Road World Finals from October 27-29. It will be his third World Finals under two classes, and in three appearances he recorded one top-10 finish.

The decision to trade in his 1,400-pound winged sprint for a full-bodied car – at nearly double the weight – was made even earlier, leading into the eighth annual Prelude to the Dream at Eldora (Ohio) Speedway in 2012. The event transplanted star-drivers of all sorts – from NASCAR, NHRA, INDYCAR and beyond – and put them all into a late model.

Schatz, who won the points championship that year, joined legendary Sprint Car driver Steve Kinser in the show; at that time, the two World of Outlaw greats collectively had 688 wins and 24 championships between them.

Schatz qualified 16th out of 25 cars at the famed half-mile dirt oval. He finished second in his heat race behind Kasey Kahne, and thereon finished fourth in the feature.  Schatz said he struggled early in the race, but started to heat-up toward the end.

“Then I was like, ‘Now what? Now what am I going to do? I really want to go again,’” said Schatz, who admits he did not like late models until he first got behind the wheel of one.

With four races left in the season, Schatz has won nearly 34 percent of all sprint races since 2014. Schatz said his win ratio always improved in sprint cars after hopping out of a late model

“A lot of people helped me – Mark Richards and Darrell Lanigan,” said Schatz, naming some of the late model series’ heavy-hitters through history. “They both are ones who helped me get into it, and get a running start too. So, that always helps.”

Though he has proven his prowess in a sprint car, Schatz said late models are more technical. Schatz did not have the wing – a staple piece of a sprint in terms of adjustments. In late model, he had to learn the class’s most detailed nuances like shock setups and even how the cars raced in general – between handling a car with a different weight displacement and the more frequent contact between the full-bodied cars on the track.

“Even the tires are really big and it’s just a whole different dynamic than what you’re expecting to feel, and in all honesty I don’t know what I’m supposed to be feeling,” Schatz said. “I’m trying to make good laps as good as I can or what feels fast based-off the people around me or what feels good to me. When you don’t know what to expect, it’s a different mindset. You keep trying things. After being in this for 20 years, hopefully you know what’s good and what’s not good.”

He did know there was going to be a difference and that it would take some getting used to. But, he chose to dabble in late models for both the new challenge and to simply have fun. At River Cities – his hometown track about an hour away from where he lives – he passed on an opportunity to competing in modifieds because late models are more similar to a sprint car.

The sheer power behind super late models allowed him the speed in the stretches like a sprint car would. When he made the decision, he also looked at car count. By the numbers in North Dakota, the modified class outweighed the late model class greatly. So, it was a matter of bringing attention to the class, a matter of “mending the fences so everyone is happy.” Schatz, usually racing for business, decided to race not only for his pleasure, but to also do his part around home helping his local racetracks and promoters.

“[The Late Model class] was a great fit that allowed me to still be able to race around home during the week and have a little fun during the off-nights with the Outlaws,” Schatz said. “It also gave me a different car to tinker with.”

For this year’s Bad Boy Off Road World Finals, Schatz said practice sessions at The Dirt Track at Charlotte started slowly. It took him the first five-or-so laps to familiarize himself with his late model again but even so, he sets himself up to make history. No driver has ever won both championships.

“I think in the back of my mind someday I’d like to travel with late model, but my first and foremost priority and love is right here. I love racing Sprint cars,” Schatz said. ”That opportunity may come someday, but I’m not going to manufacture that opportunity. I’m going to have fun while I can, and I’m enjoying the hell out of myself here. I’m going to enjoy it here, and enjoy it there when I can.”