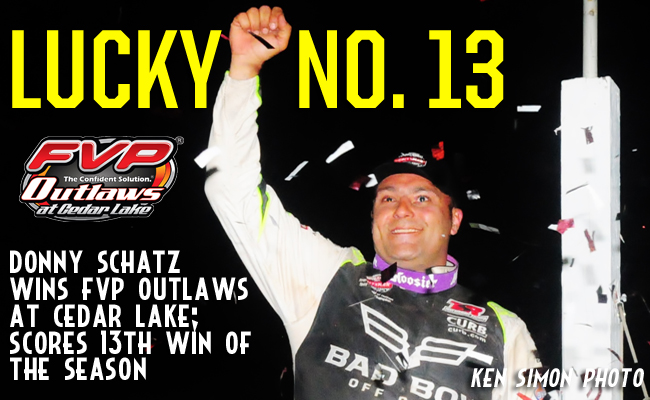 NEW RICHMOND, Wisc. – July 9, 2016 – Donny Schatz and Brad Sweet battled throughout much of Saturday night’s FVP Outlaws at Cedar Lake feature at Cedar Lake Speedway, as they traded the lead back and forth through lapped traffic and cautions, but it was Schatz who held tough to score his 13th World of Outlaws Craftsman® Sprint Car Series victory of the season.

“I’ve got to thank these guys,” Schatz said. “They’re incredible in what they do.”

Schatz, who closed out the previous night at Cedar Lake with a close second place run, jumped out to an early lead in Saturday night’s main event with Sweet hot on his trail. Through the first five laps, Sweet looked for a way around but Schatz held tough.

The first caution of the night came out on lap 13 and on the restart, Schatz and Sweet resumed their battle as David Gravel began challenging Willie Croft for third. Gravel eventually took over the third spot with a pass on the high side off of turn two.

Meanwhile, Sweet was throwing sliders on Schatz through turns one and two. On lap 13, he made it stick but Schatz battled back by. The next lap, Sweet did it again, but this time, held the position.

Through traffic though, Schatz again pulled even with the No. 49 Ollies Bargain Outlet car of Sweet, and led again briefly. Through the next six laps, Sweet held a precarious lead on Schatz, as the reigning and seven time series champion bided his time.

Sweet gave Schatz a chance as he slipped up coming off of turn four and Schatz, glued to the low line, got around him. The next time into turns one and two, Sweet again took an aggressive line that cost him momentum. This time, it was third running David Gravel who took his chance and battled forward for the second spot in his No. 5 Big Game Treestands car.

Through several late race cautions, Sweet hand his hands full with a number of drivers including his own Kasey Kahne Racing with Mike Curb teammate, Daryn Pittman. Pittman found his way by in the waning laps to take the final position on the podium.

Schatz crossed the line in first, his fifth career Outlaws win at Cedar Lake. Gravel closed out the night and the weekend double-heading in second with Pittman in third. Despite the success at the track, Schatz said Cedar Lake has always been challenging for him.

“We never really can seem to get a good feel here,” Schatz said. “I don’t know what it is… we just had to bide our time, we were awfully tight in the beginning. I guess when you know you can’t do better, you just try to save your tires. Last night I just killed the tires. We had a way better racecar at the end and that’s what counts.”

For Gravel, the finish is his third podium run in the last five races. He currently sits fifth in the championship standings, just two points out of fourth and six points out of third.

“We qualified well tonight so we put ourselves in a lot better position,” Gravel said. “I think I finished second here three times so Cedar Lake has been pretty good to me. Donny was really good – I think we needed lapped traffic.

“We’ll take second tonight. We’ve had a lot of podium finishes. Hopefully we can get some wins here.

“It’s a good result, good finish for our Great Clips team,” Pittman said. “We’ve just got to figure out what’s going on the first 10 laps of the race. I feel like we’ve been the fastest car on the race track the last 10 laps of the last couple of races. Tonight we were really good – we just gave up too many spots early. The last 10 laps were a lot of fun, we got it going in the right direction and we’ll keep working at it.”

Sweet scored his eighth quick time award of the season after a lap of 11.581. Greg Wilson was the night’s KSE Racing Hard Charger, advancing 11 positions to finish in ninth.

The World of Outlaws Craftsman Sprint Car Series takes on the Brad Doty Classic at Attica (Ohio) Raceway Park on Tuesday, July 12. For more information and to learn how to purchase tickets, visit WoOSprint.com/Brad-Doty-Classic.

RACE NOTES: Brad Sweet added another quick time award in 2016 – his eighth of the season… One night after finishing second, Schatz scored his 13th win of the season… The win tonight is Schatz’s fifth career Outlaws win at Cedar Lake. He won on night two last season… Greg Wilson was the night’s KSE Racing Hard Charger, advancing 11 positions to finish in ninth.