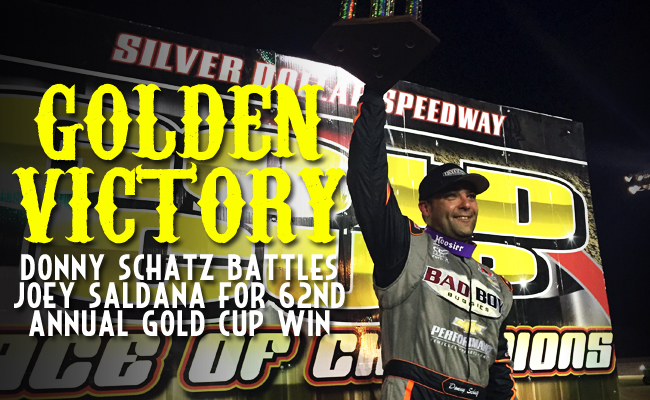 CHICO, Calif. – Sept. 12, 2015 – The finale of the 62nd Annual Gold Cup Race of Champions on Saturday night at Silver Dollar Speedway was a tale of two parts – one belonged to Joey Saldana and the other to Donny Schatz.

It was Schatz’s part that counted most though as he led the field across the finish.

“It’s been a long time since I’ve been to victory lane here at the Gold Cup,” said Schatz who won his first and, until tonight, only Gold Cup championship on Sept. 11, 2004. “I know we won here in the spring but you eye that Gold Cup when you come to this place. Damn proud to win it tonight.”

Saldana, who came into the night after a second place run in Friday night’s feature at Silver Dollar, led the field to the green flag and held off challenges early. As Schatz quickly battled from sixth to second in just the first five laps, Saldana maintained his lead.

A caution flag waved for the first time on lap 10. When the race restarted he and Schatz engaged in a tight battle for the lead that lasted four laps – Saldana maintained. He quickly caught traffic and that bunched up the top three drivers who, at that point, were Saldana, Schatz and Madsen. As Schatz looked poised to take the lead, another caution flew.

With open track ahead of him, Saldana quickly built up a lead over Schatz on the restart and soon caught traffic. By lap 20, Saldana had his hands full as he worked every line on the track to keep Schatz contained behind him. The two were even side-by-side, wheel-to-wheel for two straight laps as they came off of turn two, but Saldana held the lead.

“He was kind of doing what he had to,” Schatz said of Saldana. “I was kind of doing the same thing. If I could hang with him and still try to find another line to run in I knew I was going to eventually get him.”

When Saldana again caught traffic, Schatz found his opportunity. As the two worked to complete lap 29, the No. 15 Bad Boy Buggies/Chevrolet Performance car got around the 71M as they exited turn four.

“Last night we had a good car and I felt like I probably drove too easy just to conserve and get a good finish,” Saldana said. “Tonight, I gave it everything I had. I was trying. I was top, middle, bottom trying to make his life miserable. Obviously, he’s just waiting for you to make a mistake. He just chomps on you and see you later.”

For his portion of the race, Schatz, a five-time winner at Silver Dollar, pulled away from the rest of the field and built a healthy lead. As the battles continued behind him, he cruised across the finishline to score his first Gold Cup win in 11 years.

“It’s been a phenomenal year – hats off to this whole Bad Boy Buggies, Chevrolet Performance team,” Schatz said. “I honestly think I’m getting too old to drive like a nut and that’s what I needed to do there. I had a lot of fun but I’m not in as good a shape as I think I am. I’m played out right now.”

“I had a lot of fun. Racing with (Joey Saldana), he’s a world class racer. It’s fun to be able to race with him and not have somebody turn on you and do all sorts of weird stuff. We were just very glad to get by him.”

The win was 29th World of Outlaws Sprint Car Series victory of the season for Schatz. The six-time and reigning series champion has a 428 point lead over second place Shane Stewart in the championship standings.

Saldana, who continues to make up ground on Kerry Madsen for the third place position in the championship standings, credited Schatz and complimented his Motter Motorsports team on another good run.

“If you can be on the front straightaway with the World of Outlaws at the end of the night it’s a great accomplishment,” Saldana said. “You did a lot as a team. This weekend we were really solid every single night – qualifying, heat race, dash, feature. Definitely very positive for the whole Motter team – looking forward to finishing out the year.”

If Saldana had his hands full for the first 29 laps of the feature, Kerry Madsen had his full for the full 40 as he worked hold off Brad Sweet and Stewart for his podium perch.

After starting in third, he briefly slipped back to fourth as Schatz moved forward and Sweet slipped back. He retook the spot on lap 11 and briefly made a run at second on lap 16. It was Stewart though who gave Madsen his biggest challenge of the night.

As the two worked through the final 10 laps, Stewart was all over Madsen. On the last lap the two drivers were side-by-side off of turn two, with the edge to Madsen in three and four. With a slider, big contact was made between the two as they exited turn four, but Madsen maintained his position and the third place finish.

Emotions ran high as the cars filed into the pits following the feature. Stewart drove up next to Madsen and expressed his frustration with the end of the race.

“I was around the bottom there and I didn’t think I had time to get to the top and go past Joey so I decided to hold my line,” Madsen said. “(Stewart) got beside me going down the backstretch and made a normal slide job and he was mad, but that’s just racing. Glad to get a podium with the American Racing Custom Wheels car.

“It was a great run. I thought we had something for (Donny) there and it just didn’t work out our way. But I had a great racecar and really enjoyed the race and we’ll take that and move on.”

The World of Outlaws Sprint Car Series wraps up its west coast swing Sunday night at Antioch (Calif.) Speedway. To find out more information and to learn how to buy tickets, visit http://woosprint.com/antioch-speedway.

RACE NOTES: Donny Schatz’s win at tonight’s Gold Cup was the 29th World of Outlaws Sprint Car Series victory of the season for him… The win was Schatz’s fifth at Silver Dollar Speedway and second Gold win. He picked up his first Gold Cup win 11 years ago on Sept. 11, 2004… Kyle Hirst was the KSE Racing Hard Charger, advancing 10 positions to finish 13th… Kerry Madsen took home the quick time tonight with a lap of 11.190 seconds. It was his 10th quick time of the season.