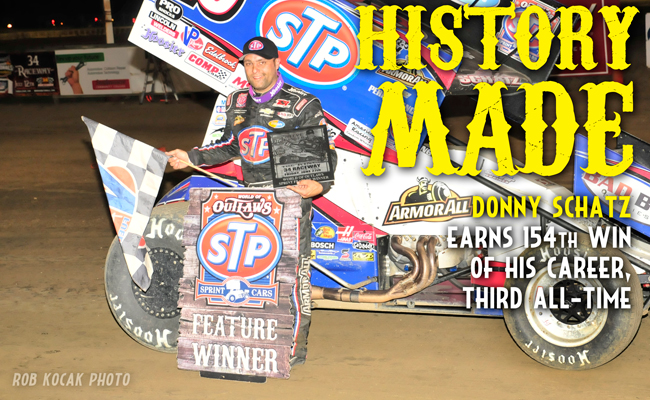 “It’s something you can’t really ever set your sights on – it’s something you just accomplish,” Schatz said. “I’m pretty lucky to be in this position and Mark Kinser is definitely a very good friend and a mentor to me. To be able to pass him on the list is something that means a lot.”

“The two guys in front of me, I don’t know that I’m ever going to catch either one of them,” Schatz said. “But realistically I didn’t try to get to this point on the list. I’m just going out and having a good time and racing and enjoying myself. When you’re enjoying yourself, things just happen. We’re kind of over that milestone and now we can just enjoy the rest of it.”

Schatz scored the victory after a tenth place starting position. Through the 30-lap A Main, he methodically worked his through the crowd ahead, eventually taking the lead on lap 21.

“We qualified well where we went out,” Schatz said. “We just missed the Dash there and we had a great run in the heats. We had a good car in the heat we just tried to fine tune it and make it a little better and that they did, they got a better race car for me. We tried to stay out of trouble early, some guys were real aggressive, and going a lot harder and being kind of silly so I tried to stay away from that and stay out of trouble and use my car when we needed it. We had an awesome machine.”

Schatz’s seventh win of the season in his STP/Armor All car tied him with Daryn Pittman for most on the year. Schatz also extended his points lead over Pittman to 61 points.

Kerry Madsen and Steve Kinser led the field to the green flag with Sammy Swindell and Brad Sweet on row two. Schatz started in the 10th position with second place finisher Terry McCarl in 14th and third place finisher Bill Balog in fifth.

Madsen jumped out to a strong lead when the green flag flew and through early cautions and an ongoing shuffling of competitors behind him, managed to hang on to it. Farther back in the field Schatz began making his move to the front and by lap seven, he took the sixth position.

Up front Paul McMahan, Joey Saldana, Brad Sweet and Swindell all battled for the top positions.

As the caution flew for the third time on lap 12, McCarl cracked the top five for the first time as he set his sights ahead. When the green flag again flew, McCarl battled Sweet down the backstretch, when contact between the two on lap 14 sent Sweet into the barrier near the entrance of turn three. After hitting a large tire, Sweet’s car took a scary tumble that left the car torn in two. Sweet was able to walk away from the wreck.

When the race returned to green after an extended red flag, Madsen maintained his lead until the caution fell again on lap 20. Schatz, now all the way up to the second place position after getting around Saldana and then McMahan, took advantage of the opportunity. As Madsen led the field into turn one, he went high while Schatz looked low. The two drag raced down the backstretch and took similar lines into turns three and four. Schatz had the advantage as they entered onto the front stretch, officially taking over the lead on lap 21.

Battles ensued in the remaining nine laps with cautions flying two more times. As McCarl settled his TheSnowPlow.com car into second, Saldana and McMahan slipped back in the pack giving way to Brian Brown’s FVP car and Bill Balog. The two battled for the third place position, trading it several times in the closing laps. Ultimately it was Balog who took the position with McCarl in second and Schatz in first.

McCarl, who was the recipient of the night’s ASE Hard Charger Award after starting in the 14th position, had Sweet on his mind following the race.

“It was unfortunate I got into Brad – I didn’t see him there,” McCarl said. “We’re thankful Brad is OK.”

McCarl said 34 Raceway is one of his favorite tracks – a place he has been coming to since he was young. His father, he said, ran at the track in the early 1970s. Whenever he competes at 34, McCarl said he expects to run well.

“We started 14th, we had a great car – we just didn’t have anything for Donny there at the end,” McCarl said. “He’s a champion and obviously one of the best drivers if not the best driver in the world. So to be hanging there with him and be putting on a show for the fans is pretty big for our team. We’re just a low-buck, little family team out of Altoona, Iowa. So to compete with these guys is a big deal for us.”

Bill Balog, a Union Grove, Wis. native, said he and his Buesser Concrete team started the day unsure about the weather and uncertain whether or not they would make the trip to 34.

“I’m glad we came out,” Balog said. “The car worked great. Like I said, I’m just glad to be up here wand running good with the World of Outlaws this time.”

Balog, who plans to compete with the Outlaws as the series moves into Wisconsin Saturday and Sunday nights, said he thinks his car will be in good shape.

“It’s going to be great,” Balog said. “We’ve got a few nights on the motor. The car is just kind of sorted out I guess you could say. So I’m pretty excited about it going back up to Beaver Dam, one of our home tracks it should be a good time.”

The World of Outlaws STP Sprint cars return to the track on Saturday at Beaver Dam Raceway in Beaver Dam Wisconsin. The Outlaws then move to Cedar Lake Speedway in New Richmond, Wis. for the FVP Outlaws at Cedar Lake.

34 SPEEDWAY NOTES: Schatz now has the third most wins in the history of the World of Outlaws STP Sprint Car Series… Joey Saldana took his 14th quick time of the season… Kerry Madsen, Daryn Pittman, Steve Kinser and Brad Sweet all won their heat races tonight… Terry McCarl was the ASE Hard Charger award tonight, advancing 12 positions to finish in the second position.