Schatz’s 7th Championship A Historic One 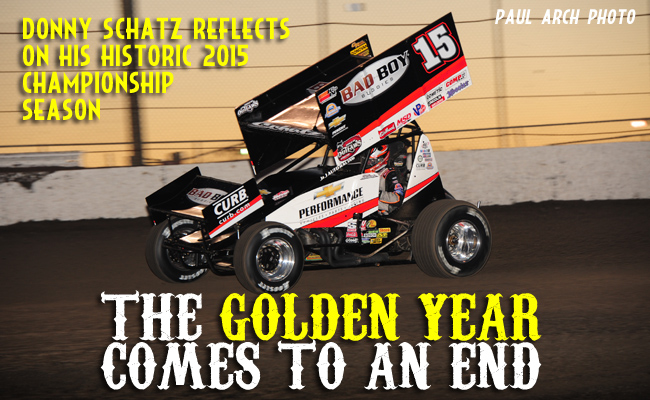 INDIANAPOLIS (Tony Stewart/Curb-Agajanian PR – Nov. 12, 2015) – The 2015 World of Outlaws (WoO) Sprint Car Series campaign was a season for the ages for Tony Stewart-Curb Agajanian Racing’s (TSR) Donny Schatz and the Bad Boy Buggies/Chevrolet Performance team. In a year dubbed by Schatz as the “Golden Season,” he and his team posted numbers that haven’t been registered in the sport for more than two decades. Schatz continued to raise the standard of excellence along the way in one of racing’s most competitive series as the North Dakota native joined an elite list of seven-time champions in major-league motorsports.

Schatz, driver of the TSR No. 15 Bad Boy Buggies/Chevrolet Performance J&J, closed his 19th WoO campaign and capped TSR’s 15th season of competition Nov. 8 at the Bad Boy Buggies World Finals at The Dirt Track at Charlotte Motor Speedway in Concord, North Carolina. Monday, he and the TSR team of Rick Warner, Steve Swenson and Eric Prutzman were recognized for their remarkable accomplishments during the WoO’s “Night of Champions” banquet.

“Today, the ‘Golden Season’ comes to an end,” an emotional Schatz said upon accepting the champion’s trophy. “I’ve been a fan of Sprint-car racing for as long as I can remember and 15 was always my favorite number, so it gives me great pride that we were able to have this kind of season in 2015. The year was filled with many highlights that we will remember forever, but I can’t help but to think of the loss of two of the bigger influences in my life – my grandfather Chris Schatz, and Doug Slocum, the man who first let me sit in a Sprint car and drive it. With the influence of these two men, I learned if you work at something long enough and hard enough, your idols become your rivals.”

Coming off his sixth career WoO championship and then-career-best 26 A-Feature wins in 2014, Schatz embarked on his eighth season driving for three-time NASCAR Sprint Cup Series champion Tony Stewart in 2015. For the first time, it was with marketing partners Bad Boy Buggies and Chevrolet Performance serving as co-primary sponsors on the TSR No. 15. Expectations were high, but the end result of 31 WoO A-Feature wins, 47 top-two finishes, 60 top-fives and 70 top-10s in 75 races that led to a second consecutive and seventh career WoO championship exceeded even the team’s lofty goals.

“I’m very fortunate to be surrounded by the best people,” Schatz said. “I can’t thank Tony Stewart and the entire TSR management and marketing team enough. My crew – Rick Warner, Steve Swenson, Eric Prutzman – you guys are the very best at what you do. It’s an honor to be your driver. And the great people at Chevrolet Performance and Bad Boy Buggies, thank you for instilling your confidence in this team and me to promote and sell your products to race fans and customers across the United States, Canada and Australia. It takes a complete team to have the kind of success we had this year and I couldn’t be more proud of the people I’m surrounded by.”

The season goes down as one of the best ever for TSR. The historic campaign concluded with the organization’s sixth WoO championship and, coupled with its 14 United States Auto Club (USAC) titles, the Brownsburg, Indiana-based team now has 20 championships.

“I’m not sure I could be more proud than I am of what Don and the 15 team accomplished this season,” Stewart said. “As an organization, we have always aimed to be the best, and that started 15 years ago. I thought, after what they had accomplished last year – winning 26 races and earning the championship – that it was going to be pretty difficult to improve on that. But Don and his guys – Ricky (Warner), Scuba (Steve Swenson) and Eric (Prutzman) – continue to reach new heights. It’s a total team effort from everyone at the shop to everyone at the track. Don is an incredible champion and a remarkable ambassador, not only for TSR but for the entire sport of Sprint-car racing.

“This season was also special in that we were able to have two partners – Bad Boy Buggies and Chevrolet Performance – expand their roles with us and join us on an historic run to the World of Outlaws championship,” Stewart continued. “Their commitment, as well as the continued relationship with Mike Curb, is a big reason why seasons like this one are possible.”

When the calendar turned to 2015, Schatz did what he does best and won a Sprint-car race in Australia to begin what would become a career season. Forty-two days later, he opened the WoO season with a second-place finish at Volusia Speedway Park in Barberville, Florida. His first victory of the season came 24 hours later and the chase for his 200th career WoO A-Feature triumph continued. Schatz became the first repeat winner a month later in California and, the following week, he was the first driver to win three races in 2015. That victory at Silver Dollar Speedway in Chico, California, pushed him into the lead in the point standings, a position he would not relinquish the rest of the season.

The team’s success during the early season, 11-event tour of California, which included four wins, proved to be a springboard for the year that saw unmatched consistency throughout Schatz’s 10-month quest for the title. Wins at historic ventures including Devil’s Bowl Speedway, Eldora Speedway, Williams Grove Speedway and The Dirt Track at Charlotte Motor Speedway highlighted April and May. A season-best five-race winning streak in June began a 29-race run of podium finishes that included 19 consecutive top-twos and propelled the team through the summer.

The surge continued into August, when Schatz led all 50 laps and came out on top in the prestigious Knoxville (Iowa) Nationals for the ninth time in the last 10 years. Wins the following week in his home state of North Dakota pushed his career win total to 198. A victory in Canada to close out August moved him to within one victory of joining Steve Kinser and Sammy Swindell as the only drivers to reach the 200-win milestone. The historic victory came Sept. 7 at Grays Harbor Raceway Park in Elma, Washington, when Schatz passed Paul McMahan with two laps remaining in the 30-lap A-Feature. Two nights later, he won TSR’s 200th WoO A-Feature at Cottage Grove (Ore.) Speedway, the track where Schatz won his first WoO A-Feature in August 1998. Later in the week, he earned his second Gold Cup Race of Champions title at Silver Dollar Speedway.

In late September, Schatz joined Kinser as the only other driver in WoO history to win 30 races in a single season with his dramatic final-corner pass of Daryn Pittman to score the victory at Berlin Raceway in Marne, Michigan, and he tied Kinser’s 1991 season win total of 31 with his victory in October at Rolling Wheels Raceway in Elbridge, New York. He followed the Rolling Wheels victory with a pair of podium finishes and closed the season with two runs from the back of the field into the top-10 at the World Finals at Charlotte to complete his second consecutive season during which he finished every lap of every race. The streak without a DNF (Did Not Finish) is now 178 races dating back to September 2013, and is one of the biggest reasons Schatz was able to win the championship by 544 points, the fourth-largest margin of victory in the sport’s 38-year history.

Donny Schatz Driver of the No. 15 Bad Boy Buggies/Chevrolet Performance J&J in the World of Outlaws Sprint Car Series

Today, the Bad Boy Buggies product line includes the hybrid Ambush iS, which features the flexibility to switch between independent gas and electric powertrains, the utility of Regen Mode™ to recharge the vehicle’s batteries on the fly, and the ability to engage both powertrains at once for 4WD power; four-wheel-drive electric machines such as the Recoil, which offers an innovative, highly efficient 72-volt AC electric drivetrain; and the Work Series of diesel and gas-powered utility vehicles such as the XD, a versatile 4WD, diesel-powered utility vehicle with a total capacity of 1,600 pounds.

Celebrating over 50 years, Curb Records is one of the world’s leading independent music companies. Owned and operated by Mike Curb since 1962, Curb Records has achieved over 400 number one records, over 1,500 Top Ten records and charted over 4,500 total records. Today’s roster includes some of the top names in Country, Christian and Pop/Rock music. Curb Records has been honored as Billboard Magazine’s Country Music Label of the Year and Radio & Records Magazine’s Overall Gold Label of the Year. For more information, visit www.curb.com.