Skip to content
Schatz Picks Up Another at Cottage Grove
Tags: Race Reports 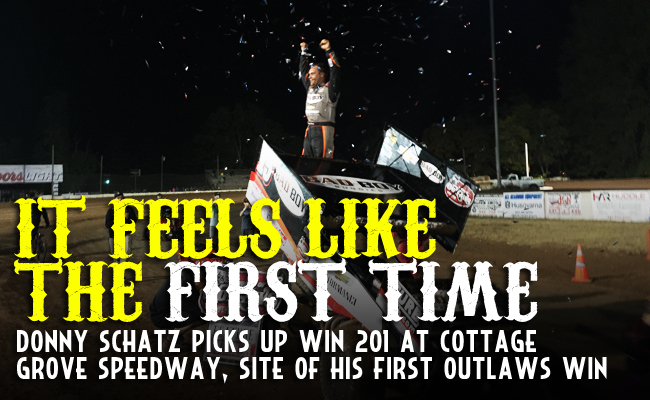 From His First Victory to his 201st, Donny Schatz Scores Again at Cottage Grove Speedway

The reigning series champion now has 28 wins on the season

COTTAGE GROVE, Ore. – Sept. 9, 2015 – Seventeen years ago at Cottage Grove Speedway, Donny Schatz picked up his first ever World of Outlaws Sprint Car Series victory. Wednesday night at the track, he added to the record books his 201st series win.

“Every one you win is incredible. You never know when it’s going to be your last so I’m just enjoying the hell out of it at the moment,” Schatz said. “This is the place I got my first win so it’s always had a special place in my heart and I’m glad to be able to win here again tonight.”

The win came as Schatz battled past Daryn Pittman in his No. 15 Bad Boy Buggies/Chevrolet Performance car on the second lap of the 35-lap feature and held him off through restarts all while effectively maneuvering through traffic.

“You just have to get through there the best that you can,” said Schatz, who drives for Tony Stewart/Curb-Agajanian Racing. “It forces you to change your line up a little bit. A lot of those guys want to be on the bottom so I had to try to run around the top. I just didn’t seem to have as much speed there… It was awful snug the whole race and just kept getting better and better and better. That’s what we strive for to make the thing better as the race goes on and be as good as we can at the end.”

In addition to the win being career number 201, it was also the 28th of the season for Schatz – the most single-season wins of his career.

Pittman, who ended the night in second, started from the feature pole. He and Schatz battled in the opening laps with Pittman blocking him effectively on lap one, but Schatz got by to lead lap two. Through early cautions Pittman kept his No. 9 Great Clips/Sage Fruit car close to Schatz and then as racing got underway and traffic came in to play, Pittman ran down Schatz. Unfortunately for Pittman, a caution flag waved.

“For whatever reason, the first five laps, I was really struggling and just had no grip,” Pittman said. “The longer the race went I felt like my car got better. The race was really getting good there before that caution or red there in the middle. We were right there in heavy lap traffic and had a shot but (Donny) doesn’t make many mistakes.”

Pittman said Cottage Grove has not historically been a good track for him, so he was happy to get the podium finish.

“It was a lot of fun,” Pittman said. “You don’t want to run second but I haven’t had very many fun seconds this year.”

Shane Stewart’s path to podium was a bit more challenging as he faced off with Brad Sweet and Jason Solwold. Stewart fell back as far as sixth in his No. 2 Eneos/GoPro car in the first ten laps as he faced several restarts.

In front of him was Solwold, who battled to third on a restart four laps earlier. As the two drivers worked to complete lap 13, Stewart got around him to take the position.

By the midway point in the feature, Brad Sweet was on Stewart’s tail and the two drivers fought for position.

“Me and Brad had a pretty good race there in the middle of the race and I could see him a couple of times, I just needed to hit my marks around the bottom,” Stewart said.

Stewart was able to do that and he brought his car home in third. He said the track is a tough one for him, so he was happy to get a podium finish. This is fourth podium finish in the last five races for Stewart and his Larson Marks Racing team.

“Happy with a podium finish and we’ll carry this momentum into Gold Cup and hopefully we can get some wins there and Antioch and on into the East,” Stewart said.

The World of Outlaws Sprint Car Series returns to action Friday and Saturday for the 62nd annual Gold Cup Race of Champions at Silver Dollar Speedway in Chico, Calif. To find out more information and to learn how to buy tickets, visit http://woosprint.com/gold-cup-race-of-champions.

RACE NOTES: Donny Schatz’s win tonight was the 28th World of Outlaws Sprint Car Series victory of the season for him… Donny Schatz’s first ever World of Outlaws Sprint Car Series victory came at Cottage Grove on Aug. 24, 1998… Daryn Pittman picked up his second quick time of the season Wednesday after a lap of 10.021… Jared Peterson was the night’s KSE Racing Hard Charger, advancing nine positions to finish in ninth.