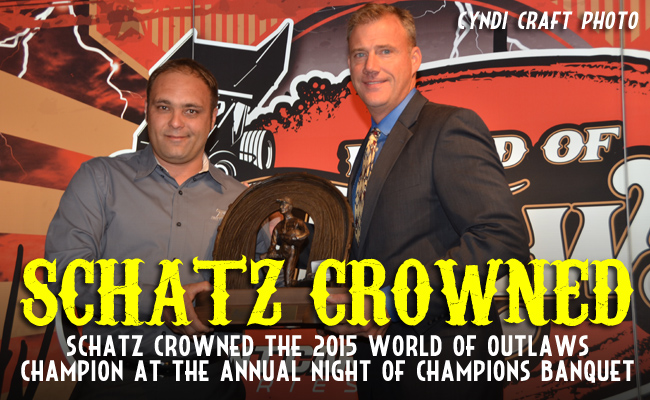 For the Seventh Time, Donny Schatz is Crowned the World of Outlaws Sprint Car Series Champion

CONCORD, N.C. – Nov. 11, 2015 – A history-making season wrapped up for Donny Schatz on Monday afternoon as he and his Tony Stewart/Curb-Agajanian Racing team accepted the 2015 World of Outlaws Sprint Car Series championship at the annual ‘Night of Champions’ banquet.

Sitting among his friends, family and fellow competitors, Schatz received universal congratulations for his seventh championships in the last 10 seasons.

An emotional Schatz thanked his family for their support over the years and recalled the year that had just come to an end.

“Well, the golden year comes to an end,” Schatz told the crowd. “I call it the golden year due to the fact that since I’ve been in the sport 15 has always been my favorite number, so it prides me to be able to have a year like this in 2015. But it’s at the loss of two of the bigger influences in my life. My grandfather and the guy who let me sit in a sprint car for the first time and drive it, Doug Slocum. With the influence of these two men, I learned if you work at something long enough and hard enough, your idols will become your rivals.”

Schatz said after nearly 20 years, he looks back on the memories and values each day more. He thanked the Tony Stewart/Curb-Agajanian Racing team and his crew members Ricky Warner, Steve ‘Scuba Swenson and Eric Prutzman for their ongoing commitment.

“Rick, Scuba, Eric, you guys are the very best at what you do,” Schatz said. “Thank you for your hard work and dedication. It’s an honor to be your driver. The great people at Chevrolet Performance and Bad Boy Buggies, thank you for instilling the confidence in this team and myself to promote and sell your products to race fans and customers.

“It takes every person in this room to make this sport what it has grown to be… The true passion of every individual in this room is what the name World of Outlaws stands for and I’m honored to be a part of that.”

Ricky Warner, Schatz’s crew chief, took home honors as the 2015 Crew Chief of the Year. He thanked his family and crew members.

“After last season, us three got together and tried to figure out how we were going to do that better,” Warner said. “I’d just like to thank Scuba, Eric and most of all (Donny). When you see some of the stuff he can do it makes you want to work hard. I just want to say thank you.”

In addition to the championship, other honors were presented throughout the night.

Jason Johnson, who came into the 2015 season as the reigning American Sprint Car Series (ASCS) champion, was named the 2014 Kevin Gobrecht Rookie of the Year presented by ButlerBuilt. Johnson and his Jason Johnson Racing team compiled six top-five finishes and 16 top-10 finishes throughout the season, including a second place at Eldora Speedway’s Kings Royal.

Johnson thanked his family, crew and fellow competitors for their support through a trying year that saw a scary crash sideline him for several months.

“To race with the World of Outlaws has been a dream for a long, long time. This dream actually became a reality this year,” Johnson said. “One person I’ve got to thank the most is my wife. Not only is she my wife, she is my biggest supporter and she’s really half the car owner… the second person I’ve got to thank is the brother I never really had. It’s the cousin who has been with me my whole career and that’s (my crew chief) Phillip Dietz.”

Eloy Gutierrez, the longtime timing and scoring official for the World of Outlaws Sprint Car Series, was presented with the Ted Johnson Memorial Award for Outstanding Contribution to Sprint Car Racing.

Gutierrez, a fixture in the series, helped pioneer the use of electronic timing and scoring in dirt track racing and laid the earliest timing and scoring loops at tracks around the country. It was Gutierrez and a partner who sold series founder Ted Johnson on the idea in the late-1990s.

“I’ve been at this since 1968 and I’m probably old enough to be some of your grandfathers,” Gutierrez said. “I think Brian Carter said it earlier, he said all of you have some significance to somebody, to your families. I’m going to flip that coin and let you know that all of you, drivers crews and my co-workers… all of you are a significant part of my life. I am honored to be here. I love what I do and I hope to do it for a lot longer… Thank you so much. I love all of you. This is a great honor.”