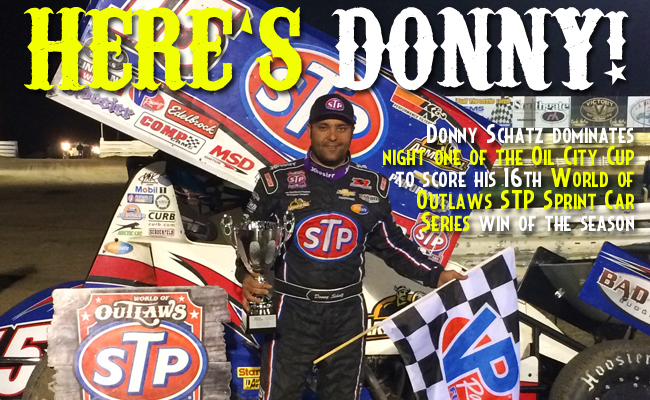 NISKU, ALBERTA – Aug. 22, 2014 – Donny Schatz is on a roll. Since July 19 he has finished no worse than third, giving him 13 straight podium finishes, and he has World of Outlaws STP Sprint Car Series wins in seven of the last ten races, including Friday night’s dominate performance on night one of the Oil City Cup at Castrol Raceway.

Schatz started the feature in third in his STP/Armor All car and powered to the lead before the field made it around the 3/8-mile oval for the first time.

“We had a very good car at the beginning and we were able to stick to the bottom and get by those guys,” Schatz said.

On lap five, Schatz’s three second lead was erased by a caution. The caution flag flew again on lap seven and lap 20, erasing sizable leads for Schatz each time.

“You just have to take what you get. We’re never a fan of cautions but it happens,” Schatz said. “The only thing it does is it lets the tires cool down and you always wonder if they’re going to reheat, if the car is going to feel the same. There are a lot of factors – what do I do next?”

Another factor the Tony Stewart Racing driver contended with throughout much of the night was lapped traffic. Schatz battled through, even passing three cars on one lap.

As the 35-lap feature wore on, Schatz struggled to maintain his earlier speed on either the top or the bottom. This opened up an opportunity for Joey Saldana, who was running second, to make a run for the lead. On the lap 20 restart, Saldana slid Schatz through turn four.

“That was the only shot I had at it so I was trying everything I could… (the track) was very technical and you have to have a good racecar,” said Saldana, who started the feature on the outside pole and spent much of the night in his Motter Equipment car running in that position.

“We just didn’t know where to run,” Schatz said. “It was awful slick in three and four – I was bouncing off the fence and couldn’t really get around on the bottom. (Saldana) must have gotten a good run and gone for the slider and it wasn’t going to stick. All we had to do was turn and go back underneath him. We did the best we could.

In the closing laps, David Gravel, who spent much of the night running third in his Roth Motorsports car, got around Saldana for second and set his sights on the lead. With a car that was able to run the faster top line, Gravel was making up ground on Schatz.

“Last five, six laps I thought I was as good as Donny there,” Gravel said. “Just a little too late. I wish this was a 40-lapper.”

“The top was best for me – Joey was running the top too,” Gravel said. “It was kind of tough for me to gain much, but I thought, with open track, I was maybe just as good as Donny. But he got through lapped traffic very, very well.”

This was Gravel’s 18th top-five finish of the season.

Saldana, who ultimately finished the night in third, said the track was challenging throughout the feature.

“As a driver you just can’t make a mistake because the track is so unique and slick and heavy and on the fence,” Saldana said. “It’s just everything you can imagine, you get to race on here. We had a shot at it and that’s all you can ask for.”

“Hats off to Donny, he’s on a tear right now. I think if you beat him, you know you accomplished something pretty special. We’ve just got to get a little better.”

With his win, Schatz again extended his lead over second place Daryn Pittman to 169 points in the battle for the 2014 championship. Schatz also heads into night two of the Oil City Cup leading the fight to become the weekend’s champion.

The World of Outlaws STP Sprint Car Series returns to action on Sat., Aug. 23 for night two of the Oil City Cup at Castrol Raceway. The Outlaws then head to the west coast, making stops in Washington, Oregon and California.

CASTROL RACEWAY NOTES: Donny Schatz scored his 16th win of the season… Donny Schatz extended his points lead to 169 over Daryn Pittman… David Gravel scored his eighth quick time of the season, the third most of any driver this season… Joey Saldana broke the tie for fourth in the points standings with Kerry Madsen. Saldana now holds the position outright with a two point lead on Madsen… Jacob Allen was the KSE Hard Charger of the night, advancing five positions to finish in 14th… Kerry Madsen, Cody Darrah and Joey Saldana all won their heat races.