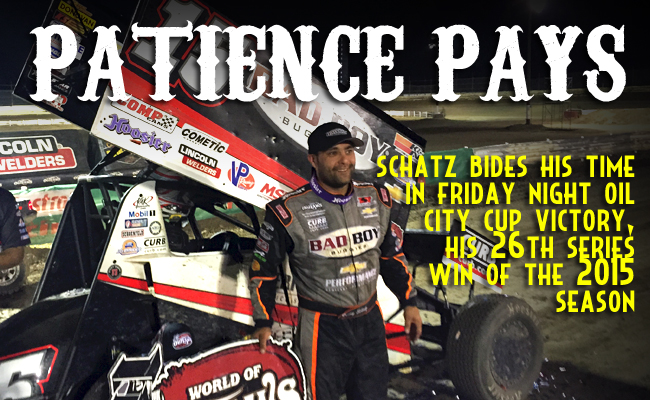 EDMONTON, Alb. – Aug. 28, 2015 – Donny Schatz waited patiently Friday night at the Oil City Cup at Castrol Raceway as Shane Stewart and Joey Saldana battled each other for the lead for the first two-thirds of the race. When the moment was right, Schatz struck, sliding past the two drivers, then first and second, to take over the lead and eventually score his 26th World of Outlaws Sprint Car Series victory of the season.

“I don’t know that we were probably as good as what Shane and Joey were but we just kept running different grooves and got to traffic and had to wait for them to make a mistake,” Schatz said. “I don’t know what happened but all I know is I came out of there and I didn’t see them in front of me anymore. That’s always good for when you’re trying to pass.”

Schatz, who hovered around third most of the night in his No. 15 Bad Boy Buggies/Chevrolet Performance car after starting the feature in fifth, found himself in the position on lap 24 as Stewart and Saldana worked their way through traffic. With Saldana on his bumper bar, Stewart caught up with Jason Sides and made contact with the wall before making slight contact with Saldana. The chain of events was the break Schatz needed as he drove by.

The win is the 199th career World of Outlaws Sprint Car Series victory for Schatz and fourth straight at Castrol Raceway.

David Gravel took home the quick time earlier in the night after a lap of 13.359 seconds in qualifying. Stewart and Saldana led the field to the green flag in the feature following a tight battle in the Dash.

Cautions plagued much of the feature, stopping action eight times throughout the main event. As Schatz rose through the field, taking over third by lap five, one constant was the tight battle between Stewart and Saldana. On at least two occasions, Saldana battled past Stewart on a restart only to have the caution fly before a lap could be completed.

On lap nine after several laps of racing, disaster nearly struck for the two leaders as several cars were caught up in a crash in turns three and four. As the field bunched up and the yellow began to wave, Saldana and Stewart weaved their way through, splitting cars and avoiding contact all while maintaining the battle for the lead.

Saldana finally did get around Stewart’s No. 2 Eneos/GoPro/KickIt car for the lead on lap 16, as another caution reset the field. Saldana took the high line in turns one and two and Stewart was not able to close the door. He went on to lead lap 16 and the subsequent six laps.

As Saldana began working his way through the back of the pack, the small lead he had built over Stewart and Schatz evaporated. Stewart was all over Saldana eventually, briefly, retaking the lead, but the lapped traffic proved a formidable foe.

“Just trying to get around Sides and he entered in the middle of the track,” Stewart said of the incident that cost he and Saldana. “I thought he was going to stay there and he just kind of kept coming and got into me. He never saw me. Typically, he doesn’t go that high on the race track.”

Schatz got around both drivers in one fell swoop. One more yellow flag lay ahead for the drivers but Schatz easily jumped out to the lead and scored the victory.

“We definitely didn’t have the best car,” Schatz said. “But with the best team these guys will definitely go back and try to make it better and see if we can’t be a little better tomorrow night.”

Stewart, who finished second to Schatz was disappointed for the night that could have been.

“We had a great car,” Stewart said. “I had a good enough car to win that race pretty easily. I wasn’t really sure what to do on all those restarts. I know Joey kept getting a run on me but I felt like if I could get off of four really well he wouldn’t be able to get to me and on that last one he got to me… You’ve got have a little bit of luck. When you do get on the front row you’ve got to be able to take advantage of it. It felt like we were able to do that tonight, I just got caught up with a lap car.”

Saldana was all smiles as he climbed from his No. 71M Motter Equipment car. The driver and his team have hit their stride in recent weeks and have found success with a series of podium finishes.

“It was a good third place,” Saldana said. “This is a fun little race track and lap traffic was just crazy. That is pretty much what got me and Shane, and Donny just snookered us both. That’s the way to goes. We had a good car, these have been the two best cars all season so we were hanging right with them tonight but obviously you can see we’re third not first or second, so we’ve got to get a little bit better.

“The guys are working really hard. The Motter car has been fast every time we’ve been out, it’s just trying to seal it up and get a win, the hard part. Hopefully we can do that tomorrow.”

The World of Outlaws Sprint Car Series returns to action tomorrow night at Castrol Raceway for the conclusion of the Ninth Annual Oil City Cup. To find out more information and to learn how to buy tickets, visit http://woosprint.com/oil-city-cup.

RACE NOTES: Tonight’s win was the 26th World of Outlaws Sprint Car Series victory of the season for Schatz and the 199th career series win… Sean McDonnell was the night’s KSE Racing Hard Charger, advancing six positions to finish in 15th… Donny Schatz has won the last four straight World of Outlaws events at Castrol Raceway… The win tonight was Donny Schatz’s first series win of the year in Canada – he swept the events last season.