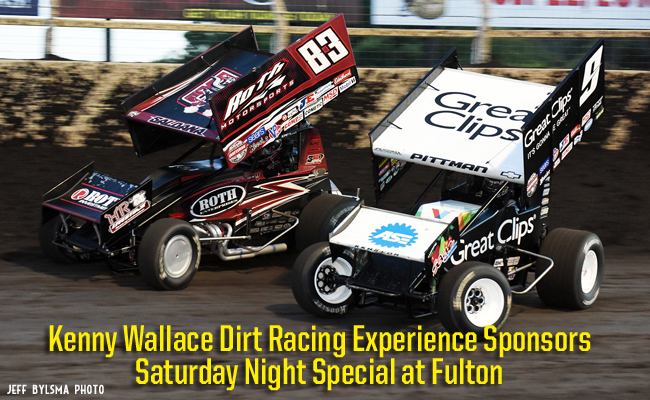 Fulton Speedway is a super-fast 3/8-mile clay high-banked track in Fulton, N.Y. The event is among the final four of the World of Outlaws Craftsman® Sprint Car season prior to the Bad Boy Off Road World Finals at The Dirt Track at Charlotte.

For the past two years, seven-time Series Champion Donny Schatz has dominated the World of Outlaws Sprint Car races in Central New York. Last year he was victorious in each of the Outlaws’ three stops in New York – Weedsport Speedway in May, Lebanon Valley Raceway in July and Rolling Wheels in October. The Northeast sweep boosted his wins tally to 31, giving him the extra boost to win the 2015 Series Championship.

The series will be bringing its high-flying winged-sprints to Fulton Speedway for the first time since 2014. Leading the stout field into the green flag for 25 laps, Daryn Pittman eclipsed his single-season win mark that year. Holding off late pushes from the Platinum drivers, he recorded his 11th win of the season. The 14 total victories that season is still the 2013 series champion’s personal best.

In addition to the attracting the world’s best sprint car drivers, many of the big-block modified drivers will also be on hand for the “Win and You’re In” race where the winner will earn the 41st and final starting spot for the NAPA Super DIRT Week Bud Light 300 on Sunday, October 10 at Oswego Speedway.

Cory Reed, the General Manager for Fulton and Brewerton Speedway, said the excitement of Saturday’s show will set the tone for the weekend finale, which is set to happen just a “crow’s walk” away. He said the combination of the World of Outlaws and Super DIRTcar Series will deliver the one-two punch fans will remember.