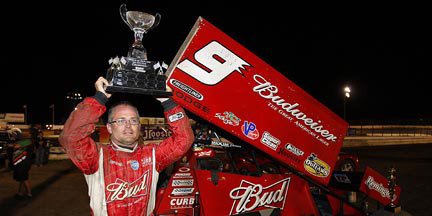 Edmonton, AB— August 29, 2009—After becoming the first driver this season to win both ends of a two-day event with the World of Outlaws, back in June at Dodge City Raceway Park in Kansas, Joey Saldana remained the only driver to accomplish this feat when he did it for the second time of the year on Saturday night, taking the checkered flag in the finale of the third annual Oil City Cup at Castrol Raceway in Edmonton, Alberta, Canada.

He dominated the weekend at the 3/8-mile leading all 70 of the laps of the two A-Feature events to pick up a total of $20,000 as the Gold Rush Tour for 2009 continues. For Saldana, it was his series leading 15th A-Feature win of the season and the 54th of his World of Outlaws career.

“My crew works so hard and they definitely deserve to win these races,” said Saldana. “They give me a great car every night and it’s up to me to get the job done. It was a great weekend for this entire team and a great effort both nights.”

The race began with Jason Meyers leading the field into turn one with Saldana challenging him on the high side of turn two, with a red flag flying before they got to turn three. On the complete restart, Meyers again led the field into turns one and two, with Saldana blasting into the lead on the high side of turns three and four.

Saldana jumped to a quick lead and was just about to encounter lapped traffic on the fifth lap when the caution flag flew. A strong restart saw him quickly dart to a sizeable lead. He was working his way through lapped traffic on the eighth lap when he got into the wall in turn two, though he gathered it back up and retained the top spot over Jason Meyers.

The native of Brownsburg, Indiana continued to work his way through traffic aboard the Budweiser Maxim toward the halfway point of the 35-lap race. By the 20th lap he had over a two second lead as he weaved his way through the slower machines, when the second red flag of the night flew.

Meyers kept pace with Saldana on the ensuing restart and took the lead from him on the low side of turn three on the 22nd lap, when the red flag flew, before the lap was completed, thus giving the lead back to Saldana on the restart.

“It’s definitely better to be lucky that good,” the winner said with a smile. “We needed that yellow and I could kind of see how the lapped cars were getting faster on the bottom and it began to take rubber and Jason (Meyers) showed me that.”

Saldana would use a strong restart on the bottom of the track with 13 laps remaining to open a comfortable lead as the laps wound down. He worked his way through traffic over the final eight laps of the race and wound up winning by nearly four seconds.

Saldana endured a total of three red flags and a yellow en route to winning. Two of the red flags were opened up, allowing the crews to work on their machines.

“It was pretty good on the restarts, I just didn’t find that rubber on the bottom of (turn) two fast enough and that could have cost me the race,” he explained. “Once we got to the rubber we had a good car, on the top or wherever we were. They said we pulled away.”

Meyers started on the pole on Saturday night and led on both starts, though Saldana would get around him and officially be credited with leading the opening circuit. Meyers dove under Saldana in turn three on the 22nd lap when the red flag flew for a vicsious crash involving Craig Dollansky. Meyers would end up finishing second in the GLR Investments KPC.

“It’s just how it goes sometimes,” shared Meyers. “Everyone did a great job on this car tonight. It’s unfortunate to get down underneath him and show him where the rubber is at and then the red comes out. It’s unfortunate, but that’s how a race is scored. I’ve won races that way and I have lost them as well. Congratulations to Joey he was fast all night long around the top. We had a good car.”

Steve Kinser lined up fourth and moved into third on the opening lap getting around Lucas Wolfe. Jason Sides got around him on the 17th lap, though the 20-time series champion would take back the third spot on the 21st go-around. He would end up third to pick up his 40th Top-10 finish of the season in the Quaker State Maxim.

“I come so close, but I was having so much trouble getting off (turn) two up top,” shared Kinser. “I came so close on the bottom and wish I could have found that down there a little quicker. Jason (Sides) actually showed it to me and got by me. If you happened to catch a lapped car bad at the end that was the only way you were going to make a pass.”

Meyers began the night by setting fast time in qualifying for the sixth time this season as he picked up five bonus points in the series championship standings as he chases his first title. On the two open red flags, he crew made minimal changes to his machine.

“We had a good car right from the start, so there wasn’t a whole lot to change,” noted the California native. “We made a couple of little changes probably for the sake of making changes. These guys worked hard all night long and we had a really good car.”

Kinser earned his second straight podium finish at Castrol Raceway, where he made history in 2007, winning in the World of Outlaws debut at the state-of-the-art 3/8-mile. Along with battling the rest of the field on Saturday night he battled the racing surface.

“The track got a little tricky at the start and everyone was gun shy,” stated Kinser. “If you ran on the bottom it was throwing all the marbles on top. We had been running the top and Joey (Saldana) got up there on the second lap and got it cleaned off. I would have thought it would have taken more laps than that, but he was pretty fast all weekend.”

Jason Sides finished fourth on Saturday night in the Wetherington Tractor Service Maxim to earn his 17th Top-Five finish of the season. Donny Schatz rounded out the Top-Five in the Armor All J&J.