Skip to content
Saldana to Park It in 2017
Tags: Joey Saldana 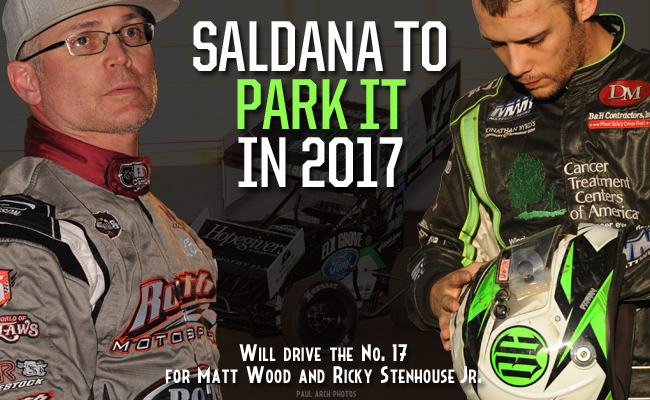 Will drive the No. 17 for Matt Wood and Ricky Stenhouse Jr.

CONCORD, N.C. – Nov. 28, 2016 – Joey Saldana is not only carrying on his family legacy into the 2017 racing season, but also living out the legacy left by the late Bryan Clauson. Saldana teamed up with Matt Wood and NASCAR star Ricky Stenhouse Jr. to pilot the Elk Grove Ford/ Roth Investments No. 17 racecar in the World of Outlaws Craftsman® Sprint Car Series tour next season – an aspiration of Clauson’s since he first hopped into a 410 Sprint Car.

Saldana finished the 2016 season with Dennis Roth and Roth Motorsports amassing five wins, 31 top-five and 62 top-ten performances with 10 quick times in 81 points races. Saldana is nearing the 100-win milestone heading into his 18th consecutive season with the series; he stands at 99 wins, a mark that has taken the 1996 Kevin Gobrecht Rookie of the Year 19 seasons to build.

Saldana has finished within the top five in series championship point standings three of his last four seasons full-time. Roth Motorsports, which began its first World of Outlaw season in 1995, expected to carry its team’s momentum into the following season. However, a series of unfortunate events prompted Roth to take a step back and not field the No. 83 car in 2017. Saldana, 43, said he still has plenty of gas left in the tank but worried that this may have been “it.”

“If you’re going to compete and be a racecar driver, if you don’t do it 100 percent then why do it?” Saldana said. “I’m past the point of just racing. I want to race the best, or I really don’t want to do it. This is what you dream about when you’re 15 [years-old], and what you still dream about when you’re 43. It was unsettling because I don’t want to just step back. If I can’t race at this level – the ultimate level – then I’m not going to do it. If you’re going to put the effort into it you might as well race the best.”

While Roth is taking a more reserved role – still helping to fund the new team – Saldana’s racing career took an emotional turn and came full-circle. Saldana will not only represent Wood and Stenhouse on the track, but also keep the spirit of Clauson alive in the racing community. Saldana will have the chance to “Park it” for Clauson, his team and those who have supported him throughout the difficult transition. Clauson intended to join the Outlaws full-time in 2017, and Saldana said he knows he will be there to enjoy the ride.

“You want to ‘Park It,’” Saldana said. “[Clauson] made that phrase popular so when you did park it, it meant you did your job that night and won the race. We need to do that as many times as possible for him so we can be competitive.  Just making that No. 17 car competitive every night would make Bryan proud because his whole goal was to run with the World of Outlaws.”

Not only were Saldana and Clauson connected through the racing family tree, but their friendship is also rooted by their own families. Clauson was there for Saldana’s sons, Reece and Ragan. To Saldana, the ride is “Bryan helping me take care of my kids.” It was not just his family. Clauson also kept Saldana’s wide-eyed love for racing strong. Clauson had a watchful eye on Saldana and vice-versa – for a different reason.

Through Saldana’s career, his goal was to always be the proven-dirt driver in the INDY 500 field. It was uncanny that while Saldana envied Clauson’s career, he was doing the same. It was Clauson’s goal to run full-time with the Outlaws but before he made the plans, he watched Saldana. The two admired each other’s paths in motorsports, no matter how different they were. It just so happened that they were both living each other’s dreams.

“It’s weird, Bryan was doing everything that I always wanted to do, and here he was wanting to do what I was doing,” Saldana said. “He did what  all racecar drivers aspired to do and that was run the INDY 500, but still be a dirt track guy. That doesn’t happen anymore. You don’t see that. But Bryan Clauson did that. He was ready for that next challenge [The Outlaws]. In a weird way, it’s all come full circle.”

In 2017, Saldana will complete the circle when he barrels down the front stretch in the No. 17 car. Saldana has not taken his road for granted. He simply wants to do right by everyone, and make the season one to remember. Both parties are in it to create a championship contending team, enough to even move the once Missouri-based team to Brownsburg, Ind., the “Brownsburg Bullet’s” hometown. Tyler Swank will remain the crew chief.

“Hopefully, we’re going to be a first-class team that will compete with the Tony Stewart Racing, Kasey Kahne Racing and Larson-Marks Racing,” Saldana said. “Hopefully I can make Bryan proud, make the Wood/Stenhouse team proud and just be competitive. I want to make them proud that they made the right choice with the driver, and that I do the right things by them and everyone that’s involved with this team. I hope we can be the thorn in other teams’ sides.”