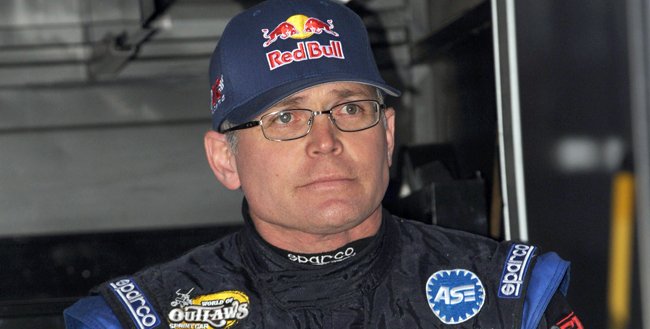 CONCORD, N.C. – July 30, 2011 – It has been two painful weeks since Joey Saldana was injured during the World of Outlaws Sprint Car Series Kings Royal July 16 at Eldora Speedway in Rossburg, Ohio. Saldana, a championship contender, was charging through the field on Lap 10 in his Kasey Kahne Racing Maxim when he was caught in a high-speed multi-car crash.

Saldana was transported that night to a local hospital and then transferred to an Indianapolis hospital. He sustained a broken right arm plus five broken ribs and a punctured lung. He underwent surgery immediately to insert two plates and 25 screws into his arm, then he remained in the hospital for much of the week as doctors monitored his lung. He is now recovering at his suburban Indianapolis home with his wife and two sons.

“I can’t really do too much of anything,” Saldana said Friday evening. “My arm, I’m foreseeing it wouldn’t be an issue, you could probably race through the pain. But they won’t let me fly, I can’t do anything with my lung until they clear me on that. I had a punctured lung and they release you, but they had problems with it twice collapsing so that’s why I can’t fly. On the 19th I’m supposed to find out how my lung is healing.

“It pretty much sucks because I can’t do anything. It seems like every time things get rolling something stupid happens. You can’t just fix a lung. I’ve never been in this position. You usually break something and you fix it and go on. Well, you can’t just fix what I broke. I’m kind of in a weird situation.”

This is the second consecutive season where a freak accident at Eldora has put an end to Saldana’s World of Outlaws championship hopes. In September 2010, he sustained a concussion in a crash after taking over the points lead during qualifying and was forced to miss the next event.

In his Kings Royal crash, Saldana, a two-time winner of the event, walked to the ambulance after safety crews and his KKR team helped him from his car. Perhaps it was the adrenaline of the race, but even at that moment Saldana had no idea the extent of his injuries.

“I was hurting, I was torn up,” he said. “At the time you don’t realize you have a punctured lung and five broken ribs, you just think you’ve got a broken arm or something. It all was way worse than what I ever thought.”

Looking ahead, Saldana is hoping for positive news from upcoming visits to his medical team so he can return to the track, albeit in an observation role while his recovery is ongoing.

“I’m hoping Tuesday I get good news from my surgeon and I’m hoping I can go to Bloomington (on Friday) to watch,” Saldana said. “Then if Bloomington goes well and the therapy goes good I really want to go to Knoxville and watch.”

For Saldana, there is no medicine that can heal the hurt of being out of his car. He is all too familiar with the long journey he faces to return to being the dominant driver he has become in recent years. However, a strong support system has emerged and will no doubt push him back to victory lane.