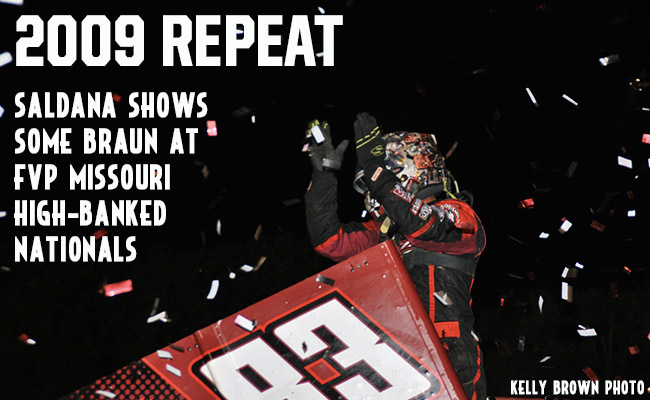 OSBORN, Mo. — Sept. 17, 2016 — Joey Saldana has long been known as one of the most fit drivers on the World of Outlaws Craftsman® Sprint Car Series. All of that fitness came in handy on Saturday night as Saldana was victorious over Jason Johnson, another driver that puts a large emphasis on physical training. The pair waged a thrilling duel late in the race on a blazing fast and very physically demanding track at U.S. 36 Raceway in the FVP Missouri High Banked Nationals for the World of Outlaws Craftsman Sprint Car Series and National Sprint League.

The win for Saldana was his second straight at U.S. 36 Raceway and the fifth of the 2016 season. Also, it was his first victory since June 22. Saldana now has 99 career A-Feature wins with the World of Outlaws Craftsman Sprint Car Series as he looks to become just the sixth driver in series history to cross the century mark. The win was also special for Saldana as it was his son, Ragan’s, sixth birthday.

“This is unbelievable,” said Saldana. “I’ve been struggling as of late. Actually, I’ve been struggling all year, not as of late. We’ had some really good cars and Dennis and Teresa Roth give me great equipment to come out here and compete at a high level. This is what I wanted I just haven’t been doing a good enough job. At least tonight, we did a good job and finished the whole night off. I’m here racing and he’s not here at least I can take him home a trophy.”

Saldana started second and took the lead from Danny Lasoski on a lap-five double-file restart. He charged to the high side in turns one and two, after restarting on the top-side of the ultra-high-banked three-eighths-mile. Saldana then encountered lapped traffic for much of the remainder of the 35-lap contest.

The final caution of the night came out on lap-16, with Saldana choosing the high line for the double-file restart. Lasoski dove low in turns one and two and nearly took the lead on the restart. A couple of laps later, Johnson closed on Lasoski and the pair battled for second.

Once Johnson moved to second, he quickly closed on Saldana and nearly took the lead a couple of times, while bouncing through some holes in turns one and two. Over the final five laps, Johnson nearly took the top spot from Saldana on several occasions. Both drivers were very complimentary of each other in terms of their physical prowess.

“Jason Johnson has been working out this year, and I’ve been working out quite a bit, and I’ve always worked out a lot since I got hurt,” noted Saldana. “It definitely pays off in situations like this. Really, the biggest thing was making sure you didn’t make a mistake. At the end, I knew if I tried too hard and did something stupid I would lose the race. I just to be patient, be smart and got it done tonight.”

The win for Saldana was the first since veteran crew chief Tyler Swank joined the Roth Motorsports team towards the end of the West Coast Swing. Swank previously had a successful run with Kerry Madsen, who was Saldana’s teammate in the Gold Cup Race of Champions last weekend at Silver Dollar Speedway in California.

“We’re actually running the KPC that [Kerry] Madsen ran at Chico [Silver Dollar Speedway],” said Saldana. “I think it’s a little better fit for Tyler Swank, who we have turning the wrenches on this thing. Tonight it paid off and it definitely was a nice piece to drive.”

Johnson continued his strong second half of the season in the Priority Aviation/ Mesilla Valley Transportation machine, finishing second. The native of Eunice, Louisiana, started fourth and ran among the top-four for the entire 35-lap distance. At some points in the late going, he had a couple of wheels off the ground as he battled the challenging track.

“That was a lot of fun,” said Johnson. “Look at Joey, he’s as fit as can be. He does CrossFit and works out. He wasn’t going to lay down for sure. I stuffed it in there a few times and gave it my best effort. I want to thank all of the great Missouri fans as well for coming out tonight.”

Dating back to the end of July, Johnson has now finished in the top-10 in 16 of the last 17 World of Outlaws Craftsman Sprint Car Series races. During that stretch he has three wins and six top-three finishes.

“Everyone has worked their tails off all year and it seems like we have come into form the last month and have been picking up speed,” noted the winner of this year’s Knoxville Nationals. :It’s a lot of fun from our standpoint. I couldn’t be more of my entire team.”

David Gravel used a late race charge to finish on the podium in the third position aboard the Big Game Treestands machine on Saturday night. The 24-year-old had a close call on the opening lap as he got some airtime, with his left rear wheel getting off the ground. He recovered from that and was able to run consistent laps to stay among the lead pack.

“It was real physical tonight,” said Gravel. “I normally don’t get tired with my hands and tonight I was gripping (the steering wheel) so hard to just not let go. We did a lot to free up the car and it seemed like we did it all. The crew gave me an awesome car. You just had to ‘Man up’ there. It was just one of those things where you had to ‘Man up’ and drive the car. We’ll take third after where we ran last night and move on.”

Shane Stewart finished fourth on Saturday night, using a strong surge on the final restart to work his way into the top-five. Brad Sweet finished fifth and is now tied with Gravel for the third spot in points. Lasoski, who led the first four laps finished sixth, with Donny Schatz seventh, and Kraig Kinser eighth. Daryn Pittman crossed the line ninth and holds a slim three-point edge over Gravel and Sweet in the battle for second in points. Kerry Madsen rounded out the top-10.

The World of Outlaws Craftsman Sprint Car Series returns to action on Wednesday, September 21 at Hartford Speedway in Michigan, for an event that was postponed by rain back in July.

RACE NOTES:  Joey Saldana repeats what he did the last time the World of Outlaws [email protected] Series was at U.S. 36 Raceway in 2009, and wins the FVP Missouri High-Banked Nationals. From the very start Saldana battled Danny Lasoski for the lead, taking it from him on a restart 4 laps in. Jason Johnson and David Gravel followed him into Victory Lane.