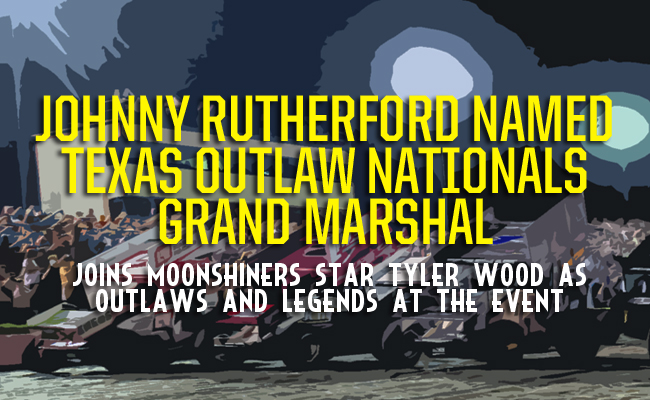 The Texan, nicknamed ‘Lonestar JR,’ is a Hall of Fame racer with experience that crosses the vast landscape of motorsports. In addition to winning the 500 in 1974, 1976 and 1980, Rutherford is a past USAC National Sprint Car Champion, IndyCar Series champion and winner at NASCAR’s highest level.

“Since the first Texas Outlaw Nationals in 2014, we have been fortunate every year to bring together some of the biggest legends in motorsports,” said World of Outlaws CEO Brian Carter. “To have the opportunity to salute the great Johnny Rutherford at this marquee event for the World of Outlaws Craftsman Sprint Car Series is thrilling. His experience and success spanned the decades and made him one of the greatest drivers to ever climb behind the wheel of a racecar.”

Rutherford will be on hand on Saturday, April 23 to greet fans and sign autographs.

Joining Rutherford as a headliner for the weekend’s events at Devil’s Bowl is Tyler Wood, a star of the hit Discovery Channel television show, ” Moonshiners.” Wood will sign autographs, serve as an honorary starter and sing the national anthem both nights.

Tickets for the World of Outlaws Craftsman Sprint Car Series Texas Outlaw Nationals at Devil’s Bowl Speedway are available by calling 844-DIRT-TIX (347-8849), or by visiting WorldofOutlaws.com/Tickets. Tickets will also be available at the track box office on both days of the event.