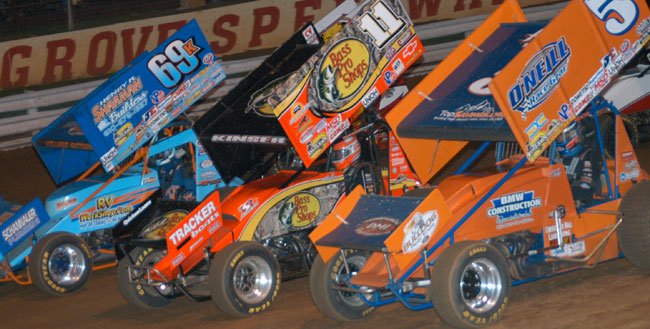 World of Outlaws Sprint Cars Set for the NAPA Rumble

The Outlaws head to I-96 Speedway on Saturday, June 2, for Michigan’s only race

After reconfiguring the track from a half mile to the fast 3/8-mile oval during the offseason, the NAPA Rumble – the World of Outlaws lone event in the Wolverine state – is set for Saturday, June 2.

“Those are usually the good races for us whenever we go to places in an area that doesn’t have a whole lot of sprint car racing,” Lucas Wolfe said. “I think it’s always good to go to those events and that’s the only race in Michigan this year.”

It will mark the sixth consecutive year and eighth out of the last 10 seasons that the Outlaws have competed at the semi-banked track.

“It’s always a good weekend when you get to a track that we’ve been to a few times that we’ve had some decent speed at,” Wolfe said.

The track record of 14.834 seconds was established by Joey Saldana in 2010. Saldana claimed the first World of Outlaws event at I-96 Speedway in 1995 and six other drivers have picked up a feature win since.

“It’s a unique track,” Kerry Madsen said. “I always look forward to going there. I think we can run well there, so I’m pretty excited about I-96.”

There is a ticket special with a $5 discount coupon on general admission at all participating NAPA Auto Parts stores. With the discount, adult tickets are only $30 and children ages 6 to 12 are only $10.

Pit/Combo tickets are available in advance only (includes a reserved seat and a pit pass) by ordering online at SLSpromotions.com or by calling 1-815-344-2023 between the hours of 8 a.m. and 5 p.m. (Central) Monday thru Friday.