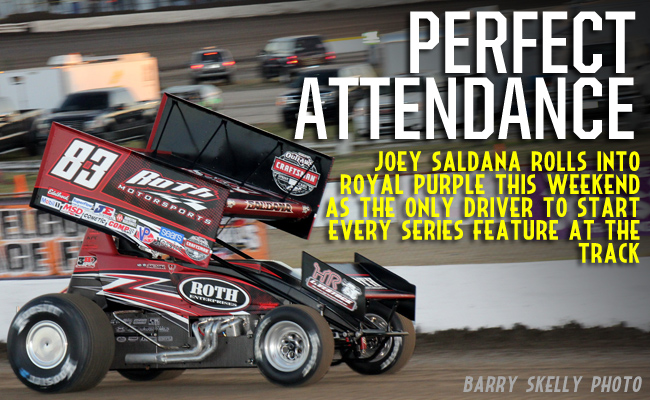 “The facility at Royal Purple Raceway is amazing and one of the best in the whole country,” said Saldana. “It’s kind of surprising that we haven’t been there since 2011. For the World of Outlaws, it’s definitely important to be in a big market like Houston, especially having Craftsman as a title sponsor now.”

Saldana, who has one win at Royal Purple Raceway, made his first four starts at the track in 2000, as the series contested a pair of two-night events, the first in April and the other in October. The veteran driver picked up a podium finish of third in 2001 at the track, driving the No. 83 for Roth Motorsports, the same team he returned to and is driving for this year.

In 2009, when he won at Royal Purple Raceway, Saldana won the first heat race and finished fourth in the dash, which put him on the outside of the second row to start the 40-lap main event. He quickly charged to the front, taking the lead from Johnny Herrera and never looking back. Saldana held off a hard-charging Donny Schatz, who powered his way from 14th to second.

“They’ve changed the track a couple of times at Houston (Royal Purple Raceway), but I’ve enjoyed racing on both configurations,” he shared. “It suits our style of sprint car racing very well. My aunt and uncle used to live in Houston and now live in San Antonio and they are probably going to come watch us and it’s great for them to get to see what I do.”

Saldana, who has 94 career A-Feature wins with the World of Outlaws Craftsman Sprint Car Series, spent the previous three years driving for the No. 71M for Motter Motorsports, based out of Minnesota. With the team, he won 12 races, including the 2015 season finale at the World Finals in Charlotte.

Even more impressive, Saldana was fastest in time trials on 48 occasions in his three seasons aboard the No. 71M. With his move to Roth Motorsports, it marks the third time in his career that Saldana has been a part of the famed operation. Saldana drove for the team back in 1996, which was his rookie season with the World of Outlaws Craftsman Sprint Car Series. He also piloted the No. 83 in 2001.

“Hopefully the third time in the charm,” quipped Saldana. “When Dennis (Roth) offered me a full-time ride, it was something I couldn’t pass up. I still have a lot of goals I want to achieve for myself before I quit racing with the Outlaws and I know I’m not getting any younger. Dennis is providing us with great equipment and everything we need to be competitive.”

Joining Saldana at Roth Motorsports to turn the wrenches this season is veteran sprint car mechanic Eric Prutzman. The Pennsylvania native spent the last several years as part of the Tony Stewart Racing team. This season marks the first time that Prutzman has been a crew on the World of Outlaws Craftsman Sprint Car Series circuit.

“Getting the team to gel is always important,” explained Saldana. “For us, being on the track is the most important thing right now. Not racing for a couple of weeks hurts us. Our team needs to be racing and getting our notebook bigger so we can be competitive with the World of Outlaws. I’ve run well at Houston (Royal Purple Raceway) before, so I am ready to get down there.”

Saldana opened the World of Outlaws Craftsman Sprint Car Series season recently with a pair of top-10 runs in Florida, including a third-place showing on the final night of the three-night event. He also led several laps en route to a third-place finish with the Arctic Cat All Star Circuit of Champions in Florida. Heading into this weekend’s event at Royal Purple Raceway, Saldana is tied for fourth in points, just 43 markers out of the lead as he chases his first World of Outlaws Craftsman Sprint Car Series championship.

“This is my 18th year out here and you always have to bring your ‘A-Game’ every night,” Saldana said. “Donny Schatz is still the class of the field and the (Kasey) Kahne cars were fast in Florida as well. I’m happy sitting fourth in points, with a handful of races under our belt. We have a lot of room for improvement and I’m looking forward to getting better. Hopefully that means moving up in points and getting wins.”

A full racing program is on tap for Saturday, February 27 as O’Reilly Auto Parts presents the World of Outlaws Craftsman Sprint Car Series hosted by Kasey Kahne, beginning with hot laps, followed by time trials, heat races, dash and main event that will pay $10,000 to the winner.

Three ways are available to fans to purchase tickets. First, participating local O’Reilly Auto Parts locations are offering a special $5 discount on tickets. Tickets can also be purchased from Royal Purple Raceway by calling 281-383-7223 or online atwww.royalpurpleraceway.com. Finally, tickets can be purchased online at http://slspromotions.ticketforce.com or by calling 815-344-2023.