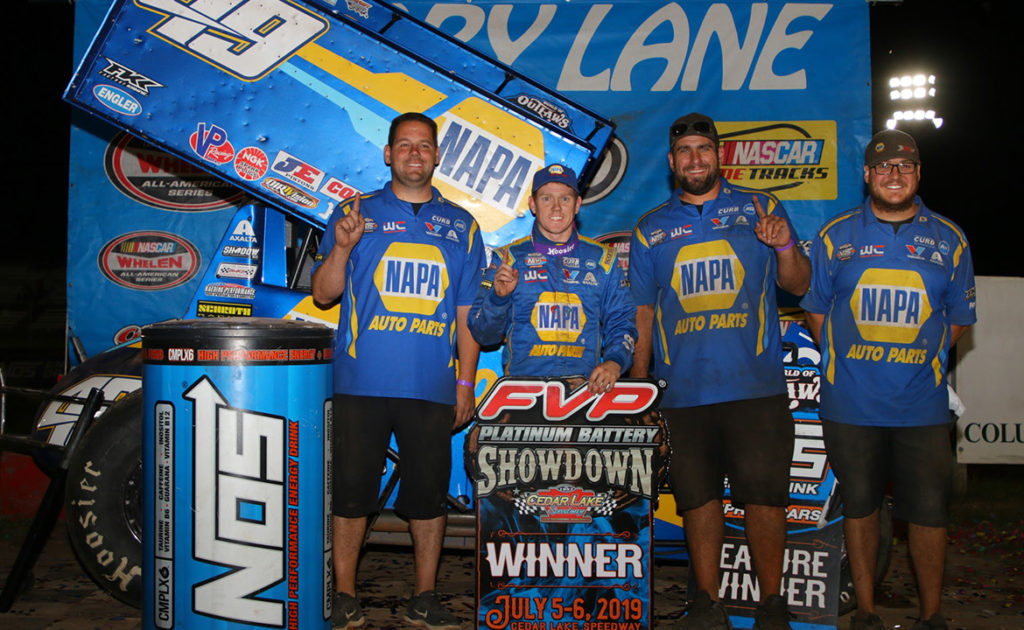 The right rear tire of Brad Sweet’s NAPA Auto Parts No. 49 car sagged lower to the ground with every inch the car rolled into the infield.

Fortunate for Sweet, his infield trip was to Cedar Lake Speedway’s Victory Lane Saturday night. It was his ninth win of the World of Outlaws NOS Energy Drink Sprint Car Series season – tying his win total last year and his record for most wins in a season – and his 43rd career Series win overall.

The image of Sweet waving the checkered flag atop his car with a flat tire was symbolistic of his path to victory.

Rain forced the remaining 28 laps of Friday night’s FVP Platinum Battery Showdown Feature to be run Saturday evening – making Saturday a doubleheader event. Sweet restarted the race in fourth and kept pace with the leaders, eyeing his third win in-a-row and 14th top-five in a row.

But four laps into the race, Sweet slowed to a stop. A U-joint broke in the car, damaging it beyond a quick repair. Sweet was forced to take his first DNF of the season. His Kasey Kahne Racing team had to pull out the back-up car for the second Feature of the night.

“I was disappointed, but we win as a team, we lose as a team,” Sweet said. “Every now and then you have a mechanical failure. We’ll go back and look at it and make sure it doesn’t happen again.”

After about an hour turnaround to get the back-up car ready, he Qualified eighth and then finished second in his Dryden Heat race behind Sheldon Haudenschild – who won the first Feature of the night. If there were still any concerns about how the back-up car would run, they were extinguished in the DIRTVision Fast Pass Dash.

Sweet ran second to Dominic Scelzi for the first half of the Dash, but found grip riding the bottom of the track and reeled Scelzi in lap by lap. On the final lap, the two California-natives charged down the front stretch side-by-side with Sweet edging out Scelzi for the win.

Now with the pole position for the Feature, Sweet was in prime position to rebound from his 23rd-place finish earlier in the night.

He launched to the lead on the initial start. Scelzi didn’t let Sweet get far, though. Five laps into the race, Scelzi snuck underneath Sweet in turns one and two. It wasn’t enough. Sweet charged off the top side of the track and maintained the lead. Scelzi wasn’t ready to give up. He charged back underneath Sweet, but, again, Sweet had the advantage on the high side. He shot to the lead and pulled away from Scelzi.

For the remaining 30 laps, Sweet held command of the race. Scelzi was left to fight for second-place, which he eventually lost to David Gravel. Carson Macedo wasn’t far behind, stealing third from Scelzi, as well.

Lap traffic became an obstacle at times for Sweet, but had little effect on slowing him down. He was denied a chance at a win earlier in the night. That was not going to happen again. He crossed the finish line with about a straightaway lead, ending the long day with a win.

“It was pretty cool that a car that just sits in our trailer we can bring out first night out and get it going that good,” Sweet said. “It’s been a long day, but it’s nice to celebrate another win. I want to keep it rolling. I have a great race car.”

Gravel has moved into third – 142 points behind Sweet.

“We’re happy with a second,” said Gravel, who went Quick Time for both Features at Cedar Lake Speedway. “We didn’t have a shot to win there. But happy with second. I think that was the best-case scenario for us. Brad got by a couple of lap cars and just wasn’t able to get back by the cars he did and kind of got stuck there.”

While Sweet dominated the race, leading all 35 laps, he said there is still room for improvement as his car lost grip throughout the run.

“If we keep fine tuning this thing, I think we can win a lot of races this year,” Sweet said.

With nine wins halfway through the season – seven of them in the last 10 races – Sweet is already on track to a career best year.

“We’ve got a good thing going and all we want to do is keep the throttle down,” Sweet said. “We just want to win as many of these races as we can. You don’t get these opportunities like we have very often.”

Sweet made the most of his latest opportunity with minutes to spare before his right rear tire gave out for the night in Victory Lane.

The World of Outlaws on Friday, July 12, will be at Hartford Speedway in Hartford, Mich. for the Battle of Michigan.