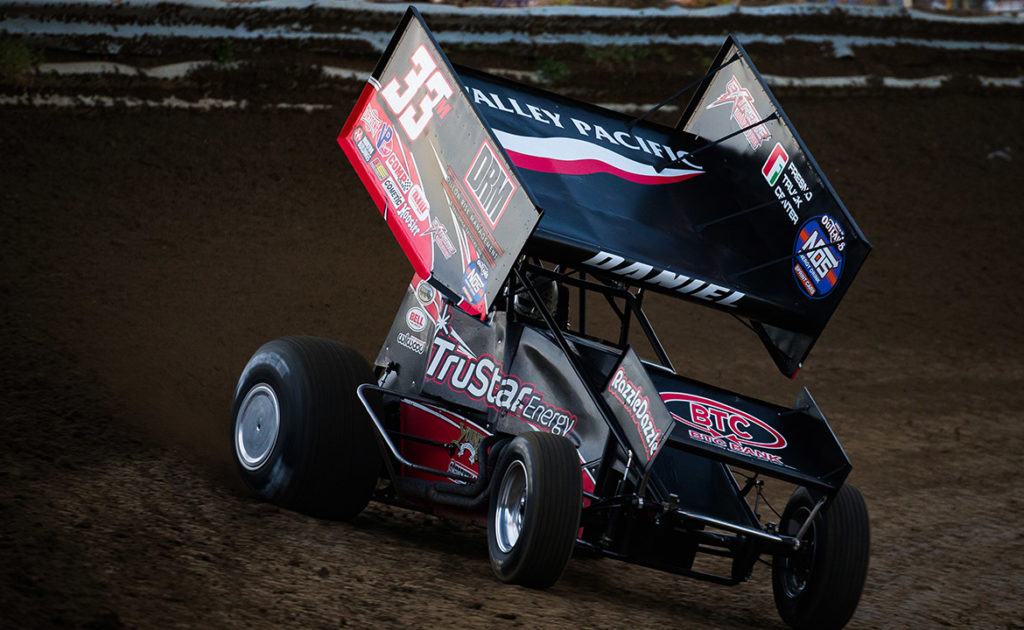 Mason Daniel has found the silver lining in his rookie season with the World of Outlaws NOS Energy Drink Sprint Car Series.

After missing eight races in a row, Daniel has made his last six races – transferring directly through the Drydene Heat Race in four of them, including the last two races at the technical Huset’s Speedway.

“I think we’ve had some ups and downs,” said Daniel, of Springville, CA. “We’ve done a lot of switching around with cars at the beginning of the year. I think recently we’ve found where we need to be at and had some good runs the last couple or weekends. Hopefully we can transition that into the last [16] races we have at the end of the year here. I’m looking forward to it. We’re definitely getting better after every weekend.”

He’s earned a career best 13th-place finish twice this year – at Cedar Lake Speedway and Terre Haute Action Track – in 18 starts. And this weekend, on Sept. 11-12, he returns to Dodge City Raceway Park, which became one of his favorite tracks last year after he made the DIRTVision Fast Pass Dash and earned his first top-15 finish with the Series.

“The first night we made it into the Dash and I just felt really comfortable there,” Daniel said about racing at the Kansas track. “It’s a great facility and the track is well prepped. It races really well. It provides a lot of moving around. There’s always a top. There’s always a bottom. I’m excited to get back there.”

He returns to the 3/8-mile track with almost a full year of 410 Sprint Car racing now under his belt and 122-time World of Outlaws winner Danny Lasoski still by his side as his mentor and crew chief. Lasoski, who won at Dodge City in 2005, has taken Daniel under his wing for the past two years to help the 20 year old achieve his goal of being a top World of Outlaws driver.

With their recent string of success together, Daniel – who’s raced Sprint Cars for just three years – said he believes they’ve finally figured out how to get him comfortable in the cars. They know what adjustments to make and what shock packages they need for the varying track conditions. That’s led to a boost in confidence and resulted in him qualifying for races on a more consistent basis.

“It’s hard, right? You’re racing against the best guys night in and night out,” Daniel said. “It doesn’t sound like that big of a deal but if you don’t make the main that’s 30 laps that you don’t get – 35 or whatever it is. It’s just, any laps you can get is experience. Especially for just a blue rookie like I am. It’s nice to make the main events and get those laps.”

Finding that balance and comfortability has been the biggest challenge for his Mason Daniel Racing team, he said. There have been a few rough nights along the way to finding it but now that they have, Daniel – who currently has just 28 starts with the World of Outlaws – said he believes they can start closing the large gap between he and the more experienced drivers.

“We have a basic baseline now with these new cars,” he said. “We struggled at the beginning of the year with being tight on the right rear. Then we got off that and started having better runs. A lot of it is throttle control. It’s so easy to spin your tires or blister your right rear or blow a tire. A lot of that. Knowing you don’t always have to be full throttle. If you’re getting tight and close to the wall, just ease off of it and the car comes off the corner straighter instead of smacking the wall. A lot of that has been throttle control and using the brake. And then just racing at speed with these guys.

“It’s a whole ‘nother level. These guys, their reaction time is top tier. They see an opening and they take it. That’s something I’ve got to watch and learn from. If I can make something happen, we’re out here racing for points and money each night, so I just have to make it happen.”

At the start of the season, his goal was to consistently be in the top-10 and be competitive on a regular basis. That changed as the season progressed. His focus shifted to simply making races. He’s OK with that, though, knowing he’s now heading in the right direction.

Knowing he’ll be back for the 2021 season, Daniel is focused on continuing to grow and try to meet the expectations he set for himself at the beginning of the year, including winning the 2020 Rookie of the Year title. He’s currently 12th in Series points – 30 points ahead of Wayne Johnson for the rookie title.

Then, he’ll turn his attention back to Florida when the 2021 season starts at Volusia Speedway Park for the DIRTcar Nationals Feb. 5-7 and continue his trek to be one of the top World of Outlaws drivers.

“Once we get there, when you’re consistently in the top-three, you’re going to get a win one of these times,” Daniel said. “It’s a huge gap like I said. Look who runs in the top three each week. Sheldon (Haudenschild), Donny (Schatz), Brad (Sweet). Guys who have been out here forever and have hundreds of more races than I do under my belt. It’s a big goal but we’re making our way there. That’s the exciting part.”

You can get tickets to the Boot Hill Showdown at Dodge City Raceway Park by clicking here.

OVER TOO SOON: Mason Daniel Heartbroken with Retirement Announcement