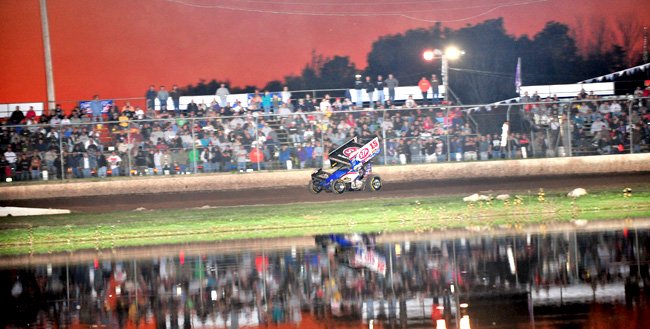 Huge track challenges the Outlaws twice this season, including May 16. (Paul Arch photo)

Rolling Wheels Raceway Park is a semi-banked, 5/8th-mile oval, making it the biggest track on the World of Outlaws Sprint Car Series schedule. The Outlaws will compete at the monster track twice this season, including Wednesday, May 16, in the Finger Lakes Speedfest.

“It’s a big, wide-open track,” Kraig Kinser said. “You’ve got to have a good setup and you’re engine has to be working well there.”

“It’s a really big track and it’s semi flat,” Cody Darrah said. “It’s really slick so when you have traction and when you hit the throttle and go forward, that’s when you know you’re right.”

“It’s just cutting consistent laps,” Kerry Madsen said. “There’s a lot of time to be made by being consistent and having a car that sort of puts the power to the ground. You’re not going to go anywhere if you run around there spinning wheels. It’s quite a challenging and unique track.”

Sammy Swindell and Donny Schatz, who are first and second in the current World of Outlaws championship standings, are the only other current touring Outlaws drivers to record a win at Rolling Wheels Raceway Park. Swindell was victorious in 1991 and Schatz won in 2004 and 2006.

Tickets can be ordered online by clicking WorldofOutlaws.com/tickets or by calling 877-395-8606. Fans who purchase tickets by May 11 will receive a free fan pit pass.