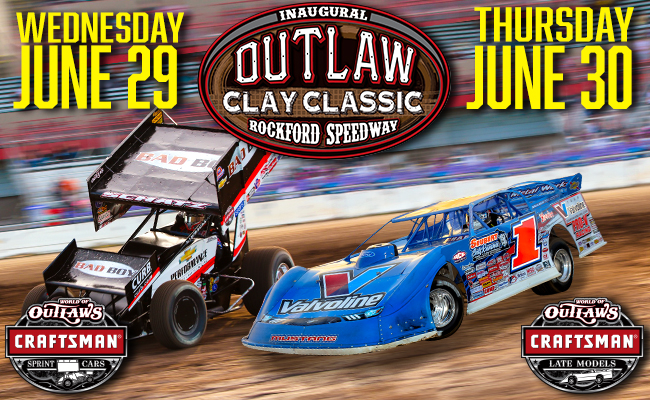 CONCORD, N.C. – May 6, 2016 – Every so often an idea so ridiculous, so unbelievable takes hold and morphs into the can’t miss event of the year. It is a moment that friends and neighbors talk about for years – and everyone who missed it, regrets forever.

That event is coming… And all it took was tons of clay, literally tons and tons of clay… and permission from Mom.

Eight inches of Illinois river clay will turn the legendary high banks at Rockford into America’s newest dirt track – the first and last time in the track’s 68-year history that this will happen.

The mastermind? The World of Outlaws’ President, Tom Deery who had to convince a skeptical owner that the crazy idea just might work.

“Rockford Speedway’s owner is one of the toughest promoters in America,” Tom Deery said of Jody Deery – who also happens to be his mother. “I have spent my entire life around Rockford Speedway and never before have I seen anything like this. And let’s be honest, it will be a miracle if she lets us do this again.”

The can’t-miss Outlaw Clay Classic will be one of the only opportunities this year to see the nation’s two premier dirt racing series compete at the same venue. Back-to-back nights of World of Outlaws racing features the sprint cars on Wednesday, June 29 and the late models on Thursday, June 30. Every advance ticket purchase receives a free fan pit pass to see all the stars and cars up close and personal.

Rockford Speedway’s famous pavement rests less than an hour from SEARS and Craftsman’s world headquarters located in Hoffman Estates, Ill. The Outlaw Clay Classic will give both World of Outlaws series the opportunity to showcase their high speed thrills and spills brand of racing to many SEARS and Craftsman employees and their families for the first time ever. It will no doubt be a special event for everyone involved.

Don’t miss your chance to witness racing history. Individual tickets and two-day packages staring at $35 are on sale now. Overnight parking for campers and kids pricing will also be available. Purchase your tickets now by calling 844-DIRT-TIX (347-8849), or visitingWorldofOutlaws.com/Tickets. For more information log onto WoOSprint.com/Outlaw-Clay-Classic.