ROAD TO WORLD FINALS: Championship Podium on the line for Macedo & Schatz 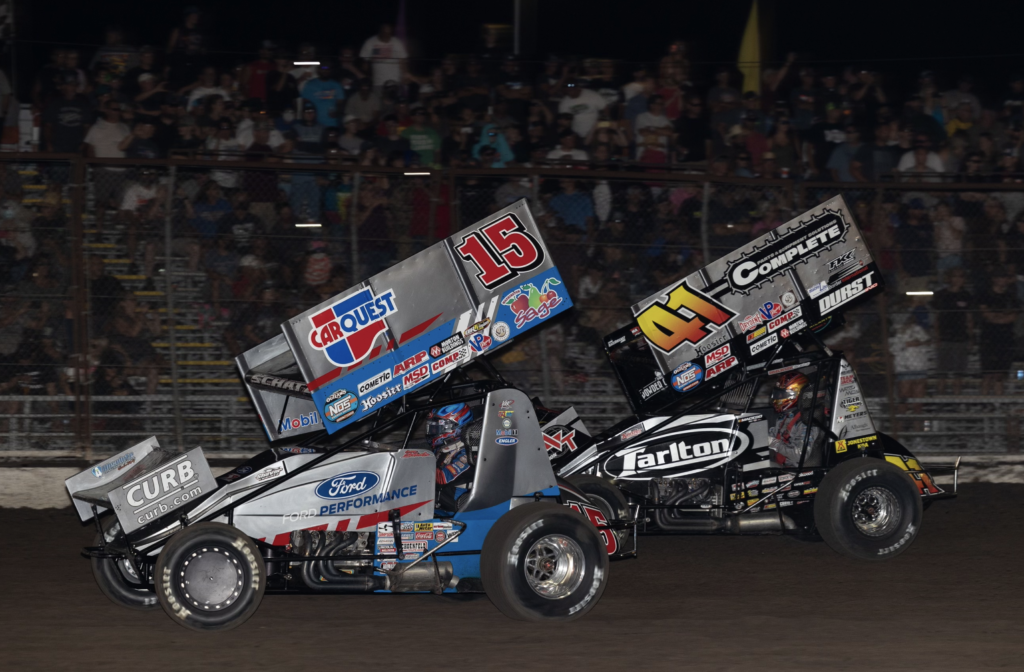 The championship may be decided, but there are still point battles on the line in this week’s NGK/NTK World Finals at The Dirt Track at Charlotte.

Entering the season-ending event, these two drivers couldn’t be more different on their stance when it comes to points.

For Macedo, the 25-year-old rising star already has a guaranteed career-best finish, but he’s hungry for more as are all the young lions with The Greatest Show on Dirt. It’s been an outstanding and exceedingly great year one with JJR, a sign that this new combo is here to stay.

For Schatz, he doesn’t just expect better, he expects greatness. The 10-time Series champion was brutally honest with his thoughts on the battle, calling it “embarrassing” as he may end up off the championship podium for the first time since 2005. Nonetheless, TSR’s second-half surge has actually been the best on tour, potentially a sign of revitalization in 2022.

It’s a hard adjustment for a man who’s used to contending for the championship year-in and year-out. After all, Schatz has finished top-three in points for 15 consecutive seasons now and still has a chance to make it 16 straight.

“I don’t think battling for third is a championship battle at all,” Schatz told DIRTVision last weekend. “When you’ve won 10 of these, it’s all you strive for. You want to win the championship and anything else doesn’t meet those expectations. All you can do is start with what you’ve got and go on from there. We’ve already dug ourselves out of a deep hole, but we’ve got more ground to gain. Hopefully, we can get back in that championship battle again in 2022.

His 2021 season was rather lackluster to start, recording a sub-par average finish of 7.65 and dipping as low as seventh in the standings during the first half. The TSR #15 squad suffered several mechanical issues that resulted in the rare DNF’s that Schatz used to never produce, thus spiraling them down the points chart.

Schatz’s second half was an entirely different story. If you reset the points, he’s literally the championship leader since the Series hit halfway at 40 races. That’s not how this works, though, and it’s now how Donny wants it to work either. Nonetheless, they’ve been phenomenal with an average finish of 4.91, multiple victories, and consistent podiums almost every night.

There have still been plenty of noteworthy nights to celebrate, though. His 300th career win at Dubuque (IA) in June was a moment that captivated all of Sprint Car racing and his near last-lap pass on Kyle Larson at the Knoxville Nationals gave him his 18th top-two finish in The Granddaddy of ‘Em All.

“It’s not me, it’s those guys,” Schatz said on TSR’s turnaround. “They’ve done an incredible job of rebuilding this team to where it should be. We’ve been extremely consistent of late. It’s taken the work of two teams really with my guys on the road, then Rick and the boys on the motor. We’re getting better and it makes racing more fun when you’re competitive.”

He’ll have a chance to cap his season on a high note this weekend at The Dirt Track at Charlotte, where Schatz has won a whopping 13 World of Outlaws races.

On the other end of 44-year-old Schatz in this points battle is 25-year-old Carson Macedo. The Lemoore, CA native is enjoying easily what is the greatest year of his young career.

“We set some goals and man, we exceeded them,” Macedo mentioned. “But that just makes us hungrier and tells us we’re capable of it. We’ve won at some tracks I’ve always wanted to win at, we got a huge Crown Jewel title, and we’ve been consistent and fast most all places. It’s been one hell of a first year. The DNF’s hurt us more than anything, but that is part of growing and learning with this Series.”

In his third full-time season with the World of Outlaws and his first with Jason Johnson Racing, Maced transformed into a legitimate championship contender aboard the #41. They’ve racked up 11 wins and at one point came within striking distance of Brad Sweet to take command of the title race.

From Knoxville to Eldora to Williams Grove, the young buck triumphed at the three toughest venues on the circuit on multiple occasions at each, something that hadn’t been done since Sammy Swindell in 1997. Their closing stretch has been wildly successful with a $25,000 Skagit Nationals score, an emotional $21,000 Tom Tarlton Classic title, and a $75,000 National Open victory.

Macedo and JJR lead the Series in top-10 finishes (63), but it’s the DNF’s and poor performances with eight results of 15th or worse which killed their points tally this season. It’s all part of the learning process says Carson, though, and he’s excited to work on that next year.

“You have to eliminate those DNF’s and the tiny mistakes,” Macedo continued. “You look at Brad and he finishes every single lap. If I’m finished 20th or worse, that’s a massive swing, especially against these guys. I’m thrilled with our year, though. We’ve made so much progress in one season, so I’m excited to see how much better we can get in 2022.”

If you can’t make it to the track, you can watch the NGK/NTK World Finals and all remaining World of Outlaws events live on DIRTVision – either online or through the DIRTVision App.

MATTER OF TIME: Kyle Larson Gets Redemption in Dominating Performance at Attica