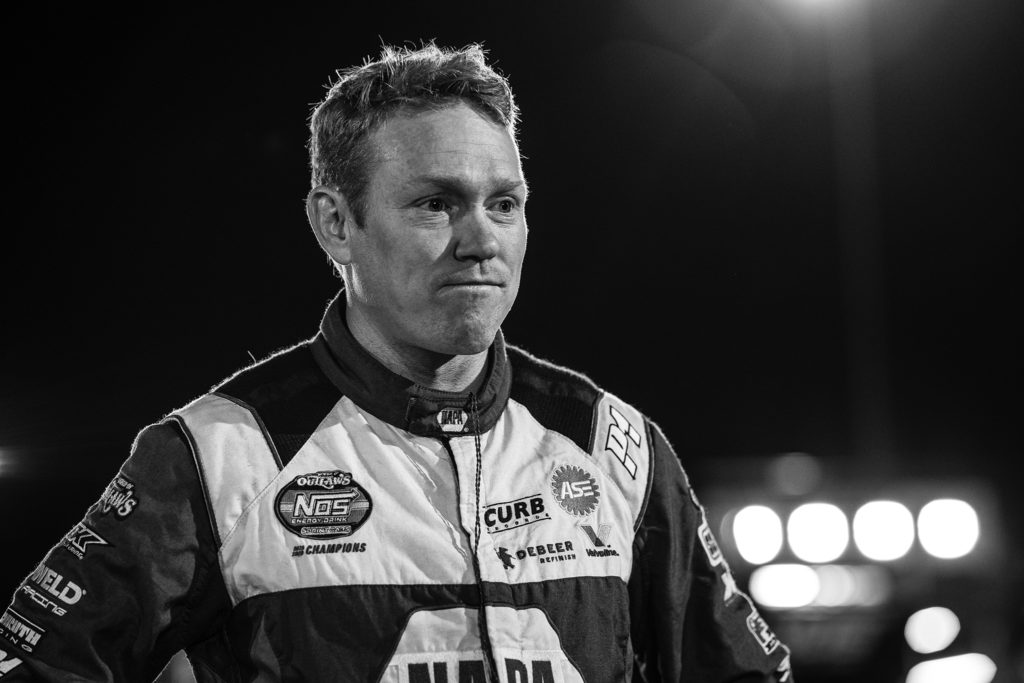 The road to the NGK/NTK World Finals officially ends here.

Brad Sweet, a 35-year-old native of Grass Valley, CA, will clinch his third consecutive World of Outlaws NOS Energy Drink Sprint Car Series championship at the conclusion of qualifying today at The Dirt Track at Charlotte. Fans can BUY TICKETS HERE or watch on DIRTVision.

His journey to the history books – joins only Steve Kinser & Donny Schatz as three-peat champs – was an 80-race grind from coast to coast with some highs and lows at every turn. The 74-time winner will admit it’s not exactly the year he dreamed of, but certainly one he’s proud of.

“It’s one of those years that didn’t feel good, but when you look back on it you’ll be proud,” Sweet said. “You can’t complain too much, but you base a lot of your season off the Crown Jewels. We lost the King’s Royal with that tire, ran third at the Nationals, on the podium at Huset’s & Jackson. It sucks being just a little bit off to get those big wins. It makes us hungrier for next year, though. Points racing near the end of the year kind of hurts that win column.”

Matching his career-high at 16 victories, The Big Cat still has a chance to break that mark this weekend as he returns to Kasey Kahne Racing’s home track in Concord, NC. He’s made 27 attempts at The Dirt Track at Charlotte with 11 top-five finishes and three runner-up results, yet still no triumphs to his name.

One of Sweet’s most impressive feats is finishing all 2,505 Feature laps up until this point. The only driver to do so this year.

“This team did a great job,” Sweet continued. “It’s a testament to how long we’ve worked together and how much we want to win. There are things you can look at and be proud of this year for sure. A lot of people would love the season we had, but we hold ourselves to a very high standard and we know that we’re capable of more. The disappointing parts are what make us hungrier for next year.”

Among Sweet’s 16 victories is a whole collage of championship-building moments.

He started on top with a season-opening victory at Volusia’s DIRTcar Nationals and kept the momentum rolling with nine wins in the first 21 races. There was a four-race winning streak at Cotton Bowl (TX), Lake Ozark (MO), and I-55 double (MO). Then another three-race streak with wins at Jacksonville (IL) and an I-70 (MO) sweep.

He broke the hearts of PA Posse fans with his Lincoln victory and scored again at 34 (IA) before earning another hat trick with a Cedar Lake (WI) sweep and Wilmot (WI) win. His richest win of the year was the $25,000 Silver Cup at Lernerville, then he tacked on a few more with a last-lap pass at River Cities (ND) and his first-ever Skagit (WA) score.

Sweet’s path to the mountaintop is something he doesn’t take for granted. He spent four seasons (2010-13) on a part-time basis in the Series before going full-time with Kasey Kahne Racing in 2014. From there, it took him another six seasons to win his first championship and he hasn’t stopped since.

“I think when people run part-time with the Series they get a false sense of reality about the World of Outlaws,” he noted. “When you come and do the full season you understand how difficult it really is. There’s an experience aspect that a lot of people can’t overcome. The amount of races isn’t easy. Any bad stretch compounds. You’re going to tracks you’ve never seen. You’re uncomfortable. It takes 3-5 years to figure that out, and you need a reliable crew chief, good engine builder, good car builder, trustworthy team around you during all of this too.”

Each championship is getting tougher and tougher Sweet says.

“To me, the competition is deeper than I’ve ever seen it and felt it,” he admitted. “There’s no faking it with the World of Outlaws. This year was harder to run top-five for sure. You’re seeing David GRavel put together something, Carson Macedo is now rolling, I believe Logan Schuchart is very close, Sheldon Haudenschild is on the verge I think, and Donny Schatz is getting it back where he belongs. There’s more uncertainty on who will win because I truly believe there are 10 guys that can win on any given night. I think the sport is getting better and teams are evolving. It’s fun to be a part of. It’s definitely getting harder to stay on top.”

That uncertainty will be on display this weekend as The Greatest Show on Dirt concludes the 2021 season with the NGK/NTK World Finals at The Dirt Track at Charlotte. The event begins on Thursday with two rounds of Slick Woody’s Qualifying before full shows on Friday and Saturday alongside the World of Outlaws Late Models and Super DIRTcar Big Blocks.

If you can’t make it to the track, you can watch the NGK/NTK World Finals and all remaining World of Outlaws events live on DIRTVision – either online or through the DIRTVision App.