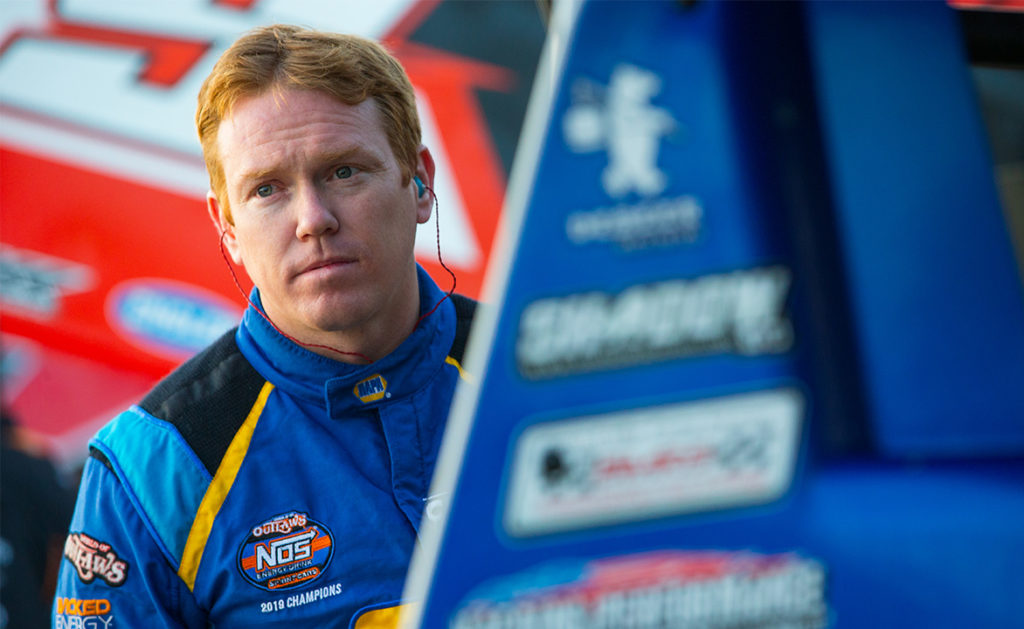 Brad Sweet is in the same situation he put himself in last year.

However, this time, the weight of the situation has dropped a few pounds.

Last year, Sweet entered the final three races with a 32-point lead over 10-time Series champion Donny Schatz. That was enough to hold off Schatz by four points and claim his first championship – the closest championship battle in Series history. This year, the defending champion enters the final three events – starting this Saturday at Kokomo Speedway – with a 62-point lead over Logan Schuchart after back to back second-place finishes. That extra gap and knowing how to hold it has Sweet breathing a little easier as he nears the Nov. 6-7 season ending World of Outlaws Last Call at The Dirt Track at Charlotte.

“I feel more relaxed this year I think,” said Sweet, of Grass Valley, CA. “At the end of the day all you can do is go out there and try your best. Try to perform and I think I’m a little more focused on winning races. Last year, I think we did get caught up in the points battle a little bit just because it was the first one. This year, I really want to win. I just want to end this year as strong as possible and have something to build on for next year.”

The biggest difference this year is Sweet has two championship battles to worry about – the driver championship and the team championship for his Kasey Kahne Racing team. KKR is currently 34 points ahead of Jason Johnson Racing for the team title. Although, even with the extra work, Sweet isn’t letting the pressure get to him.

“This year, I haven’t let myself get too bothered by it,” Sweet said about the points battles. “Obviously, being a two-time champion is much better than being a one-time champion. So, obviously, you want to win the championship. The points are super important; super hard to win every year. It brings a lot of money to the team. It brings a lot of exposure to the sponsors and everything like that. You really want to accomplish that. We’re focused on bringing Kasey Kahne Racing its third championship and, hopefully, myself a second championship. I think if we stay focused and do our job, we’re absolutely capable of accomplishing that.”

A second title for Sweet would put him in a rare and elite category. Currently, only five drivers have ever won multiple World of Outlaws Sprint Car championships – Steve Kinser, Sammy Swindell, Mark Kinser, Donny Schatz and Jason Meyers. He would also become the second driver to deny Schatz a championship for two years in a row. Meyers was the first in 2010-2011.

Sweet and KKR, led by Crew Chief Eric Prutzman, have collected eight wins, so far, this season, but Sweet is hungry for more. His last win came almost two months ago at I-80 Speedway. Since then, he’s collected 10 top-fives in his last 15 starts; four of them being runner-up finishes.

“Hopefully we can get this NAPA car back in Victory Lane,” he said. “Obviously, when you’re winning and running good the points will take care of themselves. I feel good. Obviously, you never know what can happen in racing. Always just try to stay positive and try to get the best finish we can each night.”

While Sweet sits atop the points with a healthy lead, his season hasn’t gone as perfect as he’d like. He started the year strong by picking up a win in February at Volusia Speedway Park, claimed another DIRTcar Nationals championship and left the season opening event with the points lead. Then the COVID-19 pandemic hit and racing went on a two-month hiatus. When racing resumed, Sweet lost the points lead to Schuchart during the first race back at Knoxville. Six races and three wins later, he reclaimed it.

He picked up three more wins shortly after, but then went on a rare streak of three DNFs in a row. The last time that happened to him was in 2013 before his rookie season. That resulted in him losing the points lead to Schatz at Lernerville Speedway. A few races later, he took it back before losing it again to Schuchart during their return to Knoxville. It took him seven races to get it back again from the Schuchart, who is going after his first title, and he’s yet to let go of it since.

“It’s been an up and down year, kind of for everybody,” Sweet said. “For us, we’ve had kind of a weird year. To still be going for the point championship and be leading with [three] to go is kind of crazy to me. But it says a lot about our race team that we’ve been able to overcome a ton of adversity this year. It’s just one of those things if we can win it. It’ll be awesome to go back to back. I know that we’re going to need to be stronger next year and we need to finish this year as strong as possible to accomplish that.”

For tickets to the Oct. 24 event at Kokomo Speedway, click here.