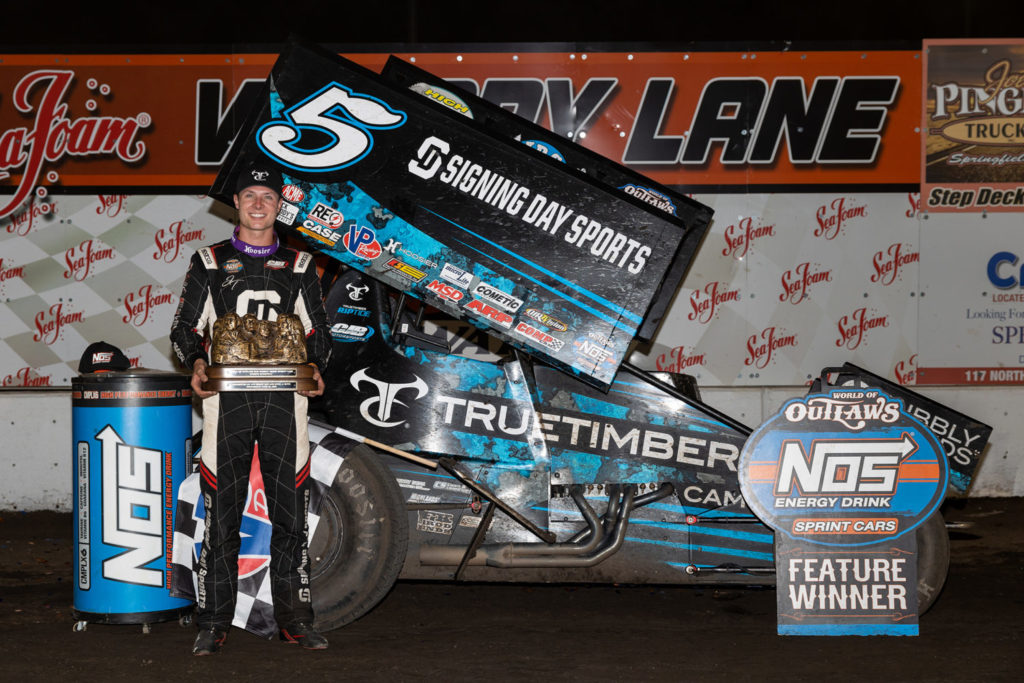 The paint hadn’t even dried before Spencer Bayston and CJB Motorsports took their new-look #5 to victory lane on Wednesday night at Huset’s Speedway.

After announcing a major partnership with TrueTimber, a titan of the camouflage industry, it took the leading contenders of the Kevin Gobrecht Rookie of the Year Award less than 12 hours to rip the  “RipTide” design right to a win with the World of Outlaws NOS Energy Drink Sprint Car Series.

Leading only the final five laps of Wednesday’s makeup show, Bayston was in the right place at the right time and made the right move to score his second win of the 2022 season, and the fourth of his career with The Greatest Show on Dirt.

It was rookie vs. rookie for the win as Bayston battled Kasey Kahne over the closing stages of the 30-lapper. The duo swapped the lead twice before Bayston eventually capitalized on a Lap 26 mishap from Kahne and secured the point amid thick lap traffic. The 23-year-old rising star then held off a quickly-charging Carson Macedo on the last lap to score the $10,000 win, an unofficial kickoff to the inaugural $100,000-to-win High Bank Nationals, which begins on Thursday.

“This is about as good as it gets,” said an elated Bayston. “I’m so pumped we could bring this TrueTumber car and this badass RipTide camouflage to victory lane on night one. I’m obviously proud of this team for what we’ve done performance-wise, but also very proud that we’ve brought in two corporate sponsors now with Signing Day Sports and TrueTimber, and given both the runs they deserve. Everyone involved with this team has been working so hard these last few weeks, and the results are showing. Any win is special, but this one definitely gives us an extra little boost.”

Bayston’s victory over the stout 46-car field may not have been possible without the mid-race drama provided by David Gravel, who also unveiled his own new scheme with Billion Automotive joining the Big Game Motorsports #2 this week.

The Watertown, CT native, who entered amid a tough 18-race winless streak and won two of three Huset’s Speedway shows last year, shot to the lead on Lap 17, but it didn’t last long. Things got tight in traffic and the tiniest of mistakes down the front stretch put his #2 into the wall and eventually upside down.

That allowed Kahne, who controlled the first 16 laps aboard the FuelMe, Karavan Trailers #9, to restart with command of the lead in pursuit of his first-career World of Outlaws NOS Energy Drink Sprint Car Series win. The Enumclaw, WA native led another seven circuits before Bayston’s #5 slid by to take the spot away.

It was no easy move as the two rookies went back and forth with the five-to-go signal in the air. Bayston found the bite off the bottom and snuck by Kahen out of turn two, but oped to go high and gave Kahne his path back to P1 with the low-side open. Another opportunity arose on Lap 26 and Bayston wasn’t making the same mistake twice, as he nailed the bottom to get by and drive away from the #9.

“That was a hell of a battle,” Bayston bragged on the duel with Kahne. “I was honestly fading when David [Gravel] drove by and Carson [Macedo], too. That restart was huge and I found our car was so good on the bottom. We were actually scratching our heads a bit after the Dash, but Barry [Jackson] figured it out and dialed us in. I had to regroup for a minute after giving him the lead back and telling myself to just do what I knew was working. We’ve got a bit more to learn in traffic at this place, but overall we made some great progress.”

Sneaking by Kahne and falling short by 0.888-seconds with a second-place finish was Carson Macedo, matching his career-best runner-up result at Huset’s Speedway. The Lemoore, CA native is back to second in the championship standings with the Jason Johnson Racing #41 now only -42 points behind Brad Sweet for command of the $200,000-to-win title.

“I feel like my guys gave me a car to win, but I made too many mistakes tonight,” Macedo mentioned afterward. “That restart really hurt us, because I had a brief chance to get Kasey for the lead, but I went too hard and stalled us out. I still got back to Spencer’s bumper, though, but the lappers were hugging my lane, then I smoked the wall trying too hard, and I had to calm myself down. It’s hard to say you’re disappointed with second, but man, we wanted this win badly.”

Finishing on the podium for the first time in his World of Outlaws career was Kasey Kahne with a third-place effort. The former NASCAR Cup Series superstar is fully re-committed to the Sprint Car game, and proving that his elusive first-career win isn’t far off. He’ll have three more chances this week alone at Huset’s Speedway to park the #9 in victory lane for the first time.

“That was a lot of fun to lead so many laps and battle with these guys for a win,” Kahne commented. “I had a great car, but I just wasn’t as good as I needed to be in the middle of all that traffic. I would stall out each time, but overall that was a great night. We have a strong starting point for the rest of the week, so hopefully, we can finish the job.”

Matching his own career-best finish in fourth place was Buddy Kofoid of Penngrove, CA in the Crouch Motorsports #11. Behind him, James McFadden and Roth Motorsports finished inside the top five for the ninth time this season.

Logan Schuchart became the seventh driver with multiple Slick Woody’s QuickTime Awards in 2022, topping My Place Hotels Qualifying at 11.705 seconds around Huset’s Speedway to claim his 31st career QuickTime with the Series.

UP NEXT (Thur-Sat) – The World of Outlaws NOS Energy Drink Sprint Car Series continues a weeklong affair at Huset’s Speedway in Brandon, SD with the inaugural High Bank Nationals on Thursday-Saturday capped off by a mega $100,000-to-win finale. Fans can BUY TICKETS HERE, or watch every lap LIVE on DIRTVision.