REVVED UP: David Gravel Beats Brad Sweet in Electrifying Debut at The Rev 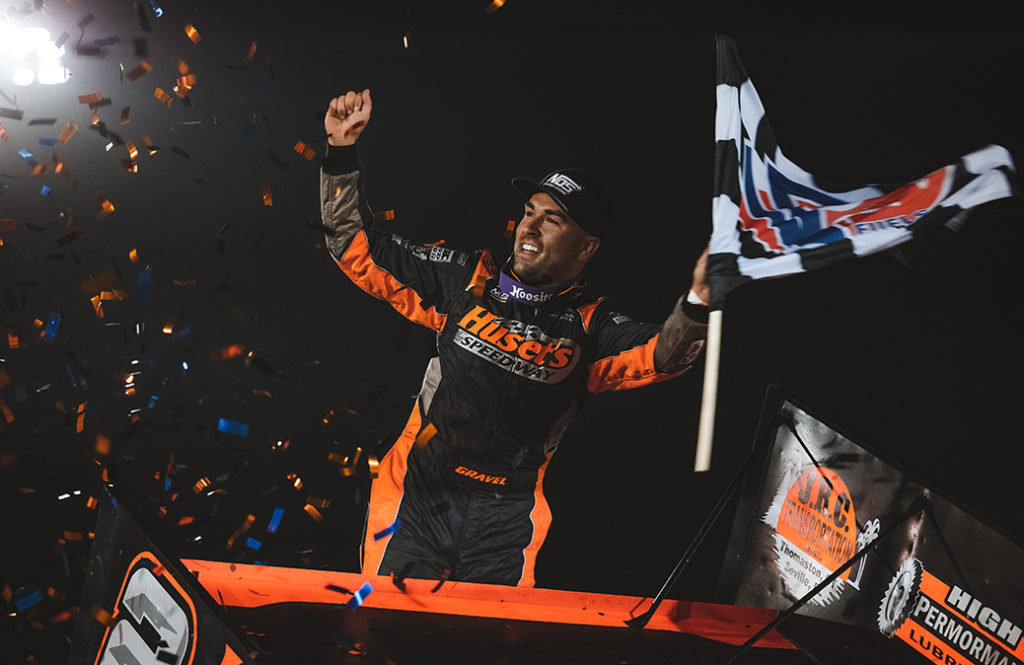 The echoing roar of the standing room only crowd said it all.

Making their debut appearance at The Rev in Monroe, LA, the World of Outlaws NOS Energy Drink Sprint Car Series delivered a race of the year candidate on Saturday night.

It was an emphatic return to the state of Louisiana – first race since 2004 – capped by a non-stop 30-lap feature which saw three different leaders, six official lead changes, and 13 total passes for the top spot.

David Gravel and Brad Sweet were the stars of the show, squaring off in an exhilarating duel. Ultimately, three-tenths of a second is all that separated the Big Game Motorsports #2 and the Kasey Kahne Racing #49 at the checkered flag; as Gravel held on to secure his 59th career World of Outlaws victory, his first of the 2021 season, and his first with his new organization.

“That was freaking badass,” Gravel shouted in victory lane. “If you didn’t like that, I don’t what you’d like. That was amazing! This is what Sprint Car racing is all about. Brad raced me clean and I raced him clean, but it was hard racing. We passed each other so many times. Damn, I earned that one!”

Before the ohh’s and ahh’s rained down, all focus was on polesitter Kasey Kahne in pursuit of his first career World of Outlaws victory. Substituting for driver James McFadden, the KKR team owner stepped into the seat of the Karavan Trailers #9 and won his Drydene Heat Race and then the DIRTVision Fast Pass Dash.

Kahne commanded the opening circuit, but Gravel slid by him on the second lap to take his first lead of the 2021 season. Fourth-starter Sweet entered the picture and brought his NAPA Racing #49 into contention on lap 12 when lap traffic forced a mistake on Gravel, allowing Sweet to race by, albeit for only one lap. Gravel came dashing back to re-claim the lead on lap 13 and held it firmly for another nine laps before the duo went side-by-side for almost three consecutive laps.

They exchanged the lead at least four-to-five times on the 22nd circuit alone and eventually Sweet was back on top for lap 23. However, with each of Sweet’s strikes, Gravel had a counter offer. Gravel never let the two-time and defending World of Outlaws champion lead more than one lap a time; repelling him with the same lion-like aggression which has propelled him to nationwide success with The Greatest Show on Dirt.

Sneaking away and surviving one last-lap effort, Gravel became the sixth different winner through six races with the World of Outlaws Sprint Cars. He joins  Sweet, Logan Schuchart, Carson Macedo, Aaron Reutzel and Sheldon Haudenschild as victors in 2021.

“That was so much fun,” Gravel continued post-race. “That’s why I got out of the car and went right over to him, I mean we passed back and forth like four or five times. This was such a great race track, and a great debut for the World of Outlaws. Hopefully this can be an early-season trip for years to come. I’m so happy to finally get that first win for this new team. We’ve been ‘there,’ but haven’t been right in the feature. We made all the right calls tonight, though, and that gives us a lot of confidence moving forward.”

Even Brad Sweet couldn’t help but smile following his runner-up effort, which marked his fifth top five finish through six races this year.

“I hope you fans enjoyed it,” Sweet said to a raucous crowd. “From the drivers seat that was a blast. Trading the lead back and forth like that is so much fun, and it was clean, hard racing too. I feel like we went back and forth like ten times or something. We were really dicing through traffic there, that really amped it up. I felt like at times I had the better race car, but at other times he just outdrove me.”

Rounding out the podium in third-place was Donny Schatz aboard the Tony Stewart/Curb-Agajanian Racing #15. The ten-time Series champion has been incredibly consistent with an average finish 5.5, but he’s still chasing that elusive 300th career World of Outlaws win.

“All you can do is be in the mix,” Schatz spoke on their consistency. “I thought we had a shot there, but we were too good early and faded at the end. The race track was really great tonight, though. You could rip the top if you needed tom, you could kind of slide through the middle, and run down on the bottom. It’s great to see a full house here tonight.”

UP NEXT – The Drydene Texas Two-Step awaits the World of Outlaws NOS Energy Drink Sprint Cars next weekend. The Series will head to Cotton Bowl Speedway in Paige, TX for back-to-back nights on Friday and Saturday, March 19-20 at the 3/8th-mile facility. You can BUY TICKETS HERE.