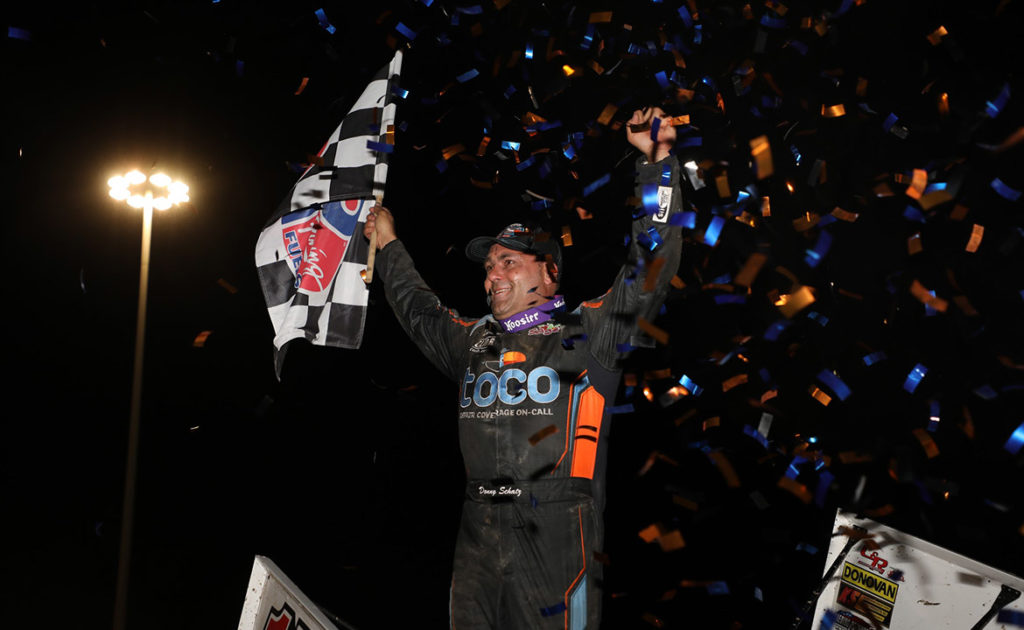 Donny Schatz couldn’t hold back the emotion any longer.

With his arms raised and cheeks pushed up by a grin, Schatz yelled with a childlike giggle “Hell yeah, I won at Wilmot! That’s off the books.”

“The older you get, you probably put more of a fine-tooth comb on places you haven’t won at and this was one of them,” Schatz said.

Schatz and his Tony Stewart/Curb-Agajanian Racing team unloaded Saturday evening with the finest comb they could build. He set the pace in Hot Laps and then Qualified second behind Series points leader Brad Sweet.

In his Drydene Heat race, Schatz won by 1.4 sec. He backed that performance up by winning the DIRTVision Fast Pass Dash with a 2.7 sec. lead at the finish.

Dominating the night was not enough to convince Schatz he would excel in the Feature, though. He admitted he didn’t know what to expect from the 1/3-mile track, anticipating lap times to drop during the Feature.

On the initial start, outside polesitter Daryn Pittman made a charge at Schatz for the lead. He kept pace with the reigning champion down the back stretch and dove underneath him in turn three. The two entered turn four side-by-side – the closest anyone came all night to passing Schatz. But the Fargo, N.D.-native had the better run off the corner and cleared Pittman down the front stretch.

For the remaining 39 laps, the only time drivers got close enough to see the bumper of Schatz’s Toco Warranty No. 15 car was during a caution on Lap 13 for a car going off track in turn two. After that, Schatz spent his night methodically navigating lap traffic.

However, Friday night’s Feature winner at Hartford Speedway, David Gravel, was not going to let Schatz cruised to the victory. Gravel, Sweet and Pittman traded positions in the top-four all night. After battling side-by-side for several laps, having to be gentle on the throttle through the tight slick corners, Sweet eventually passed Pittman for second on Lap 16. Gravel did the same a lap later, moving past the Roth Motorsports No. 83 car for third.

With 10 laps to go, Gravel finally put together a strong enough lap to work his way by Sweet and try to track down Schatz.

At that point there was about a two second gap between Schatz and second-place. Gravel slowly closed it lap by lap. Every lap car that halted Schatz’s momentum was a few more tenths of a second gained by Gravel.

By the time the white flag came out, Gravel had made up close to a second on Schatz. It wasn’t enough, though. He ran out of time.

He and his Jason Johnson Racing team were happy with the run, though, leaving the weekend with a win and runner-up finish.

By taking the win Schatz finally broke his winless streak he’s had since the end of May when he won at Nashville Fairgrounds Speedway.

“I’m sure somebody was coming there at the end,” Schatz said. “I was kind of hanging. We could get through a few lap cars, but then when I had to move around in (turns) one and two I wasn’t as good. But glad to get a win. It’s been a while. Always feels good to get the win, especially here in Wisconsin.”

For the past four years, Schatz has had double digit wins at this point in the season. He’s also amassed 20 or more wins in a year since 2013. After winning at Wilmot, he acknowledged the level of competition in the World of Outlaws right now makes those statistics hard to live up to.

“I don’t know how many guys there are capable of winning 20 races in a year,” Schatz said. “There’s some. But it’s hard to live up to them standards and there’s a lot of fast race cars out here right now. The parity in this sport is pretty crazy and to keep up with it is even more so.”

That hasn’t stopped he and his team from striving to do so, though. They continue to make changes and try new things with the car, he said.

At the moment, they’ve found a feel Schatz likes. He’s now eager to carry his winning momentum into the upcoming weeks of prestigious and big paying races. And with another grin and a chuckle, Schatz said he’s even looking forward to going to Tri-State Speedway in October – another track he hasn’t one at.