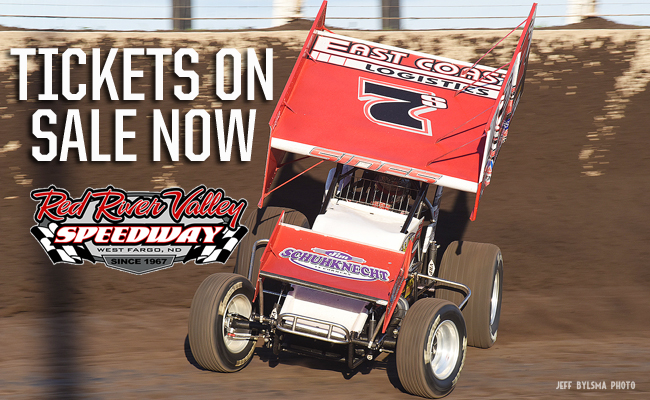 WEST FARGO, N.D. — February 1, 2017 — Tickets are now on sale for the “Duel in the Dakotas” on Saturday, June 17 at Red River Valley Speedway in West Fargo, North Dakota, featuring the World of Outlaws Craftsman Sprint Car Series and can be purchased online at slspromotions.ticketforce.com or by calling SLS Promotions at 815-344-2023.

In the World of Outlaws Craftsman Sprint Car Series last visit to Red River Valley Speedway in 2012, three-time series champion Sammy Swindell was victorious. Swindell started on the pole and led early, before Chad Kemenah took the top spot on the ninth lap. Swindell would re-take the lead with just eight laps remaining to earn his seventh-career A-Feature win at the track.

Donny Schatz, who calls Fargo home, has won four times at the track, including winning both nights of the 2006 “Duel in the Dakotas.” Schatz has won at least once at every track in his home state that the World of Outlaws Craftsman Sprint Car Series has competed it. He raced with the Outlaws for the first time at Red River Valley Speedway as a teenager in 1993, finishing 15th.

Young drivers Logan Schuchart, Jacob Allen and Clyde Knipp are all set to hit the road again in 2017, along with rookie contender Brent Marks from Pennsylvania.

Tickets for the “Duel in the Dakotas,” featuring World of Outlaws Sprint Car Series event at Red River Valley Speedway in West Fargo, North Dakota, on Saturday, June 17 can be purchased online at slspromotions.ticketforce.com or by phone at 815-344-2023.