REALITY OF A DREAM: Christopher Bell wins at Tri-State Speedway as driver, owner 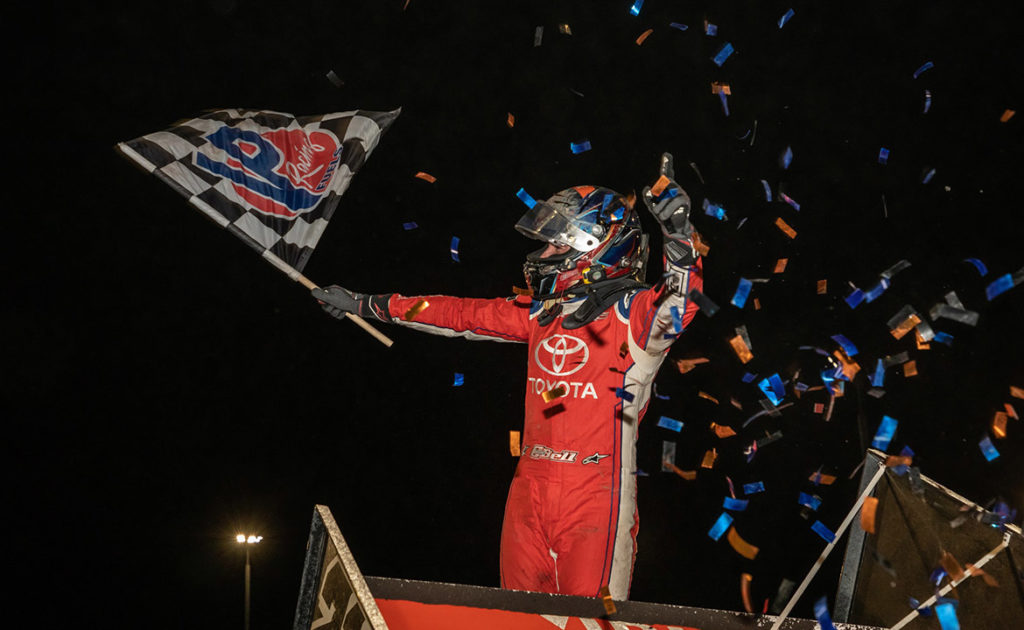 After winning $100,000 in April through NASCAR’s Dash 4 Cash Christopher Bell already knew what he would like to do with the money: purchase his own Sprint Car.

The victory was his fifth career World of Outlaws win – first as an owner in the Series – and first win at the speedway.

“So, I had four Outlaw wins coming into today and I promise you those four Outlaw wins would be in my, arguably top-five, definitely top-ten of my favorite wins of my life,” said an elated Bell. “To get number five here with my own race car and a group of friends working on this thing is really special.”

The Indiana race was Bell’s fourth time in his own car, which he built with friend Chad Boat. He already had one win in it, too. However, throughout the night, you would’ve thought he’d been racing it for years. Bell even claimed he wasn’t good at the quarter-mile track.

He first dispelled that allegation with strong runs in his Drydene Heat race, where he finished second, and the DIRTVision Fast Pass Dash, where he finished third. In both races he had a car capable of charging to the lead but ran out of laps to do so.

In the Feature, Bell had 40 laps to accomplish his mission.

Sweet jumped to the lead at the start of the race with Brent Marks and Bell in tow. However, five cautions – which separately involved drivers such as David Gravel, Sheldon Haudenschild and Donny Schatz – in the first 12 laps hindered the top three from finding a rhythm.

Bell highlighted his speed in that time span, sliding by Marks for second during a short run in between cautions.

After the accident on Lap 12, the race went caution free for the remaining 28 laps. With Schatz mired in the back of the field, Sweet was poised to have a strong points day, especially if he could secure the win. However, Bell wasn’t sympathetic to his cause.

Both almost saw their winning desire vanish on the restart with 28 laps to go. Third-place Kerry Madsen dove underneath Bell and Sweet in turn three, eyeing the lead. The Australian couldn’t find the grip to exit the corner ahead of them and fell back to third by turn one.

The battle was then Sweet versus Bell. Sweet ran high, while Bell slung his car around the bottom of the track, creeping closer and closer to the NAPA Auto Parts No. 49 car every lap. And Sweet knew it.

On Lap 16 the Californian stole Bell’s line running the bottom in turns three and four. Bell countered his move and switched to the high side of the track.

The beneficiary of the swap proved to be Bell. He got a run off turn four, propelling him to Sweet’s rear bumper down the front stretch. He stayed high into turn one, as Sweet went low and, again, charged off the corner with momentum. This time he was able to use it to dart underneath Sweet into turn three and clear him for the lead by turn four, officially taking it on Lap 18.

“I felt good all night long and I knew our car was really close,” Bell said. “Honestly, we didn’t really change very much all night long. We kept getting those short stints and I felt fine. I felt like I just needed to get some time underneath of us and get going.”

The race was then Bell’s to lose. He distanced himself from Sweet, even with lap traffic creating an unpredictable obstacle course in front of him. Sweet began to fade by the halfway point, losing second to Madsen and eventually falling to fifth. Madsen didn’t have anything for Bell, but another threat behind him did.

After finding himself at the back of the field due to being involved in an early caution, Haudenschild moved his way into fifth with 19 laps to go. He was third with nine laps to go and second with five laps to go. The NOS Energy Drink No. 17 was an unstoppable bullet. But time was not in his favor and Bell worked lap traffic with ease.

However, worry did set in for Bell in the closing laps, unsure how his car would handle as the track changed and if he would have enough fuel to finish.

“This track just changes so much,” Bell said. “I’ve never gone good here before in my life. This is the first time I’ve come to Haubstadt and been competitive. I learned a lot today.”

By the time Bell sped past the waving checkered flag, he had a 3.7 second lead over Haudenschild.

“I set us back tonight with qualifying and getting in that mess in four, just really put us behind,” Haudenschild said. “After I did that my goal was to get back to where I was and go from there. On this type of track we know we’re going to have restarts. Just tried to get track position as early and quick as I could on those restarts and just try to pick them off after that.”

Madsen rounded out the podium with his brother Ian Madsen finishing fourth and Sweet ended the night fifth. After being involved in two accidents, Schatz managed a 13th-place finish but is now 30 points behind Sweet.

Wins are all that matter to Bell when it comes to racing with the World of Outlaws. Every one of them he cherishes, he said, especially when they’re with friends.

“Everyone works their tails off on it, but it’s a lot of fun because we’re all friends,” Bell said. “Just very thankful to be here driving this thing.”

The World of Outlaws NOS Energy Drink Sprint Car Series on Friday, Oct. 18, will be at Lakeside Speedway in Kansas City, Kan. for the FVP Platinum Battery Showdown. Get tickets and more information.