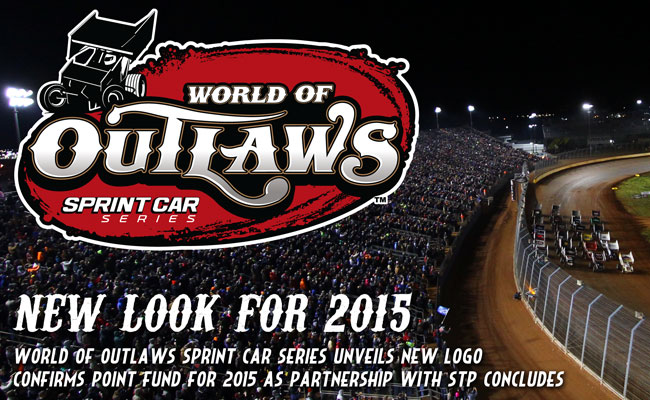 The new look is reminiscent of the logo last used by the series during the 2007 season with what was then a bright red replaced with a darker cardinal red. New transporter wraps, websites, advertising and souvenir merchandise are all in the works featuring the cardinal, along with a heavy dose of black and white with a dirt inspired tan as an accent color.

“STP was an amazing partner and we loved carrying the red, white and blue of one of the most famous brands in motorsports, but in racing everything is constantly evolving and we are excited about our new World of Outlaws Sprint Car Series look for the start of the 2015 season,” World of Outlaws CMO Ben Geisler said. “We thank them for their involvement and will continue our pursuit of a new partner that will help us bring The Greatest Show on Dirt to the greatest fans in motorsports from coast to coast.”

The World of Outlaws also confirmed the Sprint Car Series point funds for the 2015 season would remain the same as 2014 and continue to be the richest in all of grassroots motorsports. The 2015 champion will cash a check for $150,000 with a total cash payout of $650,000 at the World of Outlaws banquet in November.

The 90-race season begins Friday, Feb. 13, during the 12-day DIRTcar Nationals at Volusia Speedway Park, and after racing in 24 different states and three Canadian provinces, concludes with the championship-deciding Bad Boy Buggies World of Outlaws World Finals Nov. 5-6-7 at The Dirt Track at Charlotte.