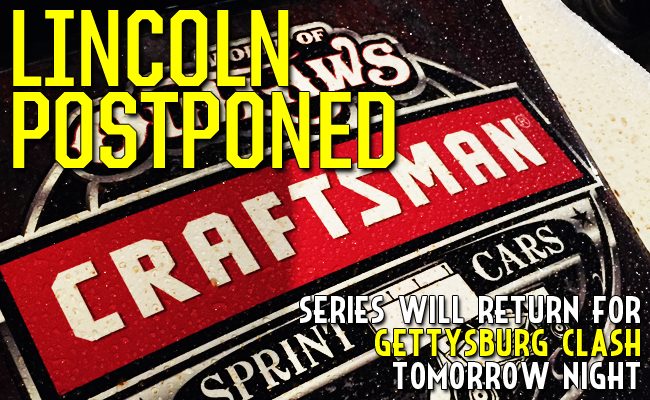 Series will resume action at Lincoln Speedway on Thursday, May 19

ABBOTTSTOWN, Pa. – May 18, 2016 – The World of Outlaws Craftsman® Sprint Car Series Gettysburg Clash at Lincoln Speedway in Abbottstown, Pa. has been postponed to Thursday, May 19 due to persistent rain throughout the day and night on Wednesday.

Fans that purchased grandstand tickets will be able to redeem their tickets for reentry at the track on Thursday, while fans that purchased pit passes and received a pit band are asked to keep their bands on for tomorrow night to gain reentry into the pits.

Thursday’s action starts with the track gates opening at 3 p.m., followed by the grandstand gates at 4 p.m., with racing action kicking off at 7:30 p.m.

This weekend will become action-packed as the Outlaws will now be on track for four straight days, starting at Lincoln, then Williams Grove Speedway for a Morgan Cup double-header on Friday, May 20 and Saturday, May 21, followed by the Empire State Challenge at Weedsport (N.Y.) on Sunday, May 22.