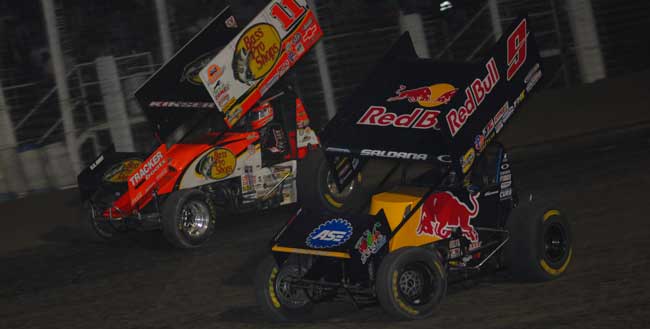 BRANDON, S.D. — June 26, 2011 — Mother nature continues to be a thorn in the side of many race teams and tracks in 2011. Adverse weather conditions have plagued the World of Outlaws Sprint Car Series multiple times and the event at Huset’s Speedway near Brandon, S.D., is the latest to fall victim to wet weather. The “Greatest Show on Dirt,” was scheduled to take to the high banked, three eighths mile on Sunday, June 26, until rain forced a postponement.

“We are looking at potential rain dates so that we can come back here and put on an amazing show for our fans here in the upper Midwest,” said , World of Outlaws Sprint Car Series Director, Carlton Reimers.

Any and all ticket questions should be directed to Huset’s Speedway by visiting www.Husets-Speedway.com or by calling (605) 582-3536.

The Outlaws are coming off an exciting night at Princeton (Minn.) Speedway that saw Donny Schatz pick up his second win of 2011. The victory gave the Fargo, N.D. native three wins in a row at the track and his 107th career win, which ties him with his boyhood idol, Doug Wolfgang, for fourth on the all time career wins list.

Jason Sides wound up second after a spirited battle with Schatz. Steve Kinser, Jason Meyers and Mark Dobmeier rounded out the top 5.

The Outlaws now head south for the Boothill Showdown at Dodge City Raceway Park in Dodge City, Kan. on Friday, July 1 and Saturday, July 2. Tickets are still available by going to www.WorldofOutlaws.com or by calling (877) 395-8606.

NEW ONLINE HOME – Make sure to check out the all-new WorldofOutlaws.com for the latest news and results, plus exclusive driver interviews, video and pictures. Also listen to every event live at DIRTVision.com.