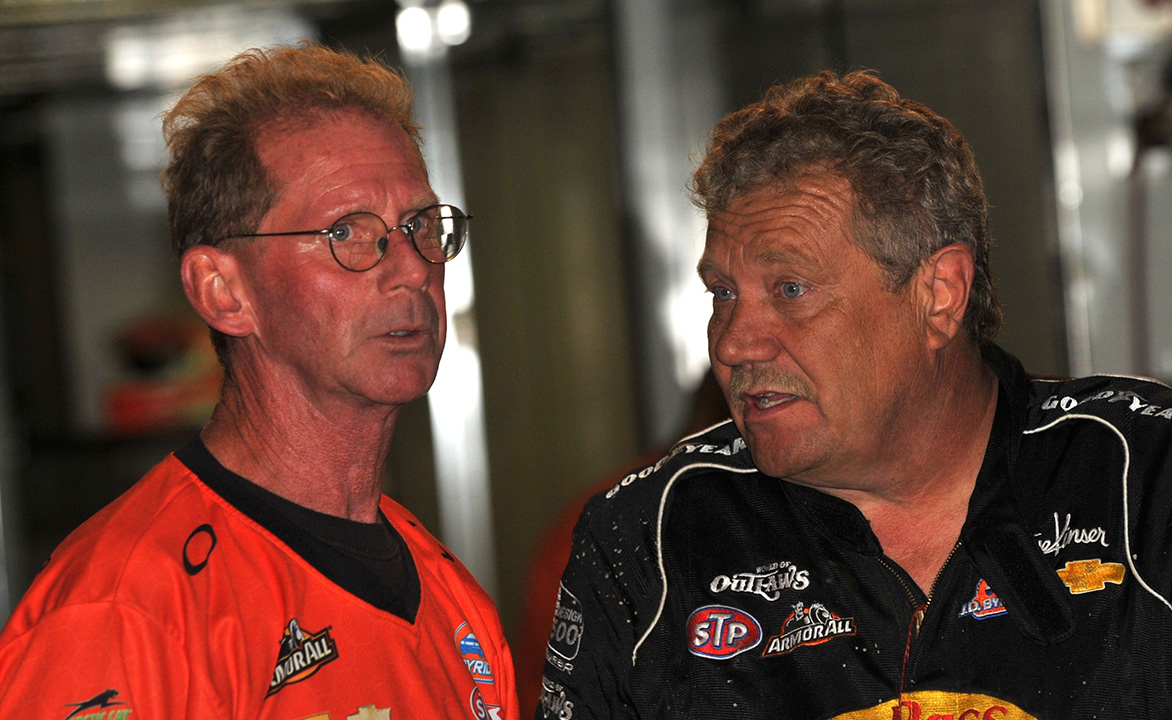 Paul Arch photo
Gerkin helped Steve Kinser earn 12 of his 20 championships and won with five different drivers in his career
By World of Outlaws | November 16, 2020 at 1:34 pm

A hell of a mechanic. A good friend. The best person with heart and the desire to win.

The list of accolades could go on for days when talking about Sprint Car Hall of Famer Scott Gerkin.

The 62-year-old iconic crew chief and engine builder died on Nov. 8, but his memory has lived on through anecdotes shared by those who knew him best.

“Without question Scott was one of the greatest Sprint Car crew chiefs ever,” World of Outlaws NOS Energy Drink Sprint Car Series Director Carlton Reimers said. “He had a quick smile and infectious laugh, but he also had a very serious side when it came to Sprint Car racing. Scott was one of the guys I could always call on for a straight answer and he helped me out many a time. He was a very well-liked and influential member of our Sprint Car family. My thoughts are with his family and loved ones.”

Gerkin entered the high-octane life of Sprint Car racing when he started working with legendary race car builder “Dizz” Wilson right out of high school. His knowledge of the sport and the mechanics of the car continued to grow after working with the likes of Chuck Amati, Randy Kinser and Karl Kinser.

His mastery of Sprint Car engines started with lessons from Galen Fox and Karl Kinser, who groomed him to be Mark Kinser’s crew chief for the full World of Outlaws tour in 1984. He won six races with Mark, but his true claim to fame with the Kinser family came when he started working on Karl Kinser’s engine program. That led to eight championships, five Knoxville Nationals victories and more than 250 wins in total for Steve Kinser in that time.

After Steve Kinser took a year away from Sprint Car racing to focus on NASCAR, he returned with his own team in 1995 and hired Gerkin to head it. The duo continued their unstoppable dominance, winning the Historical Big One and the Knoxville Nationals. Gerkin stepped aside as Kinser’s crew chief for a brief period at the midway point in 1998 and focused on building Kinser’s engines. They reunited in 1999 and went on to win four more championships, two more Kings Royals and another Knoxville Nationals title.

They joined Tony Stewart/Curb-Agajanian Racing in 2010 and picked up another Kings Royal win. Gerkin also earned the Crew Chief of the Year Award that season. Kinser retired from Sprint Car racing in 2014 and Gerkin spent a part of 2015 working with Jason Sides before retiring himself.

“One of the greatest guys in the world,” Sides said. “Laid back. Helped me a lot. Just the knowledge that he had and the experiences… Always a pleasure to be around him and the girls and the fam.”

Gerkin’s legacy is cemented in the record books, while his memory continues to live on through the stories shared by his friends and family.

I was saddened to hear of Scott Gerkin’s passing. He was old school and one hell of a mechanic. So many memories from being on the road. I’m proud I could also call him a teammate during our time together at TSR. Please keep the Gerkin family in your prayers. pic.twitter.com/pxj7hzwOoR

I’m gonna miss this guy, from hanging out at the racetrack to building me badass engines. Scott Gerkin was as humble as they come, he was a hell of a wrench, family man, and friend.
Godspeed 🏁 pic.twitter.com/oVdVYiAs9N

So sorry to hear that Scott Gerkin has passed. I’ll always remember the great conversations I had with him especially after he was inducted into the NSCHoF. Very smart, hard working, loyal man who always talked about how proud he was of his daughters/family. RIP my friend #Legend

We are unbelievably saddened to hear of Scott Gerkin’s passing. An absolute maestro behind a wrench, he was also a family man & friend. Please keep the Gerkin family in your prayers.

Godspeed, Scott… it was a privilege to not only call you a colleague but a friend. – TSR pic.twitter.com/QfSix5Wn79

Absolutely heartbroken to hear that Scott Gerkin has passed away. A brilliant mind and an even better person. My heart goes out to Sharon and Sarah. @SGerkin