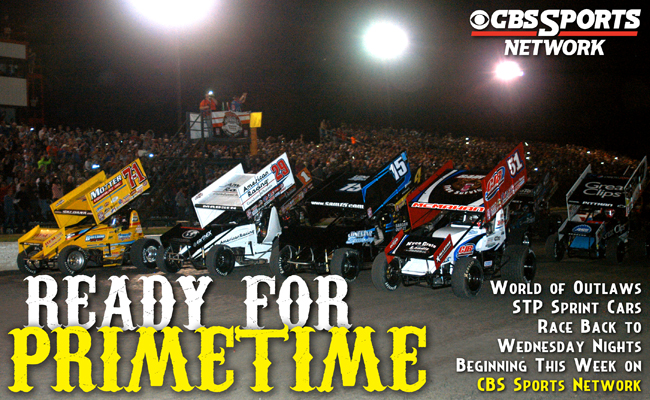 The events featured in the series’ first weeknight primetime telecasts since 2006 include action from both nights of the Texas Outlaw Nationals presented by American Racing Custom Wheels at Devil’s Bowl Speedway as well as the World of Outlaws STP Sprint Cars vs. the Pennsylvania Posse in the Gettysburg Clash at Lincoln Speedway and in the Spring Nationals at Williams Grove Speedway.

Veteran play-by-play man Dave Rieff will once again anchor the broadcasts this June with color analysis from sprint car hall-of-famer Brad Doty and reporting by Bobby Gerould and Tony Bokhoven.

The 7 p.m. air time is a change from the originally scheduled and reported broadcast time of 9 p.m. Eastern.

For more information, including a full programming schedule and how to get CBS Sports Network, go to www.cbssportsnetwork.com .