Pointed in the right direction 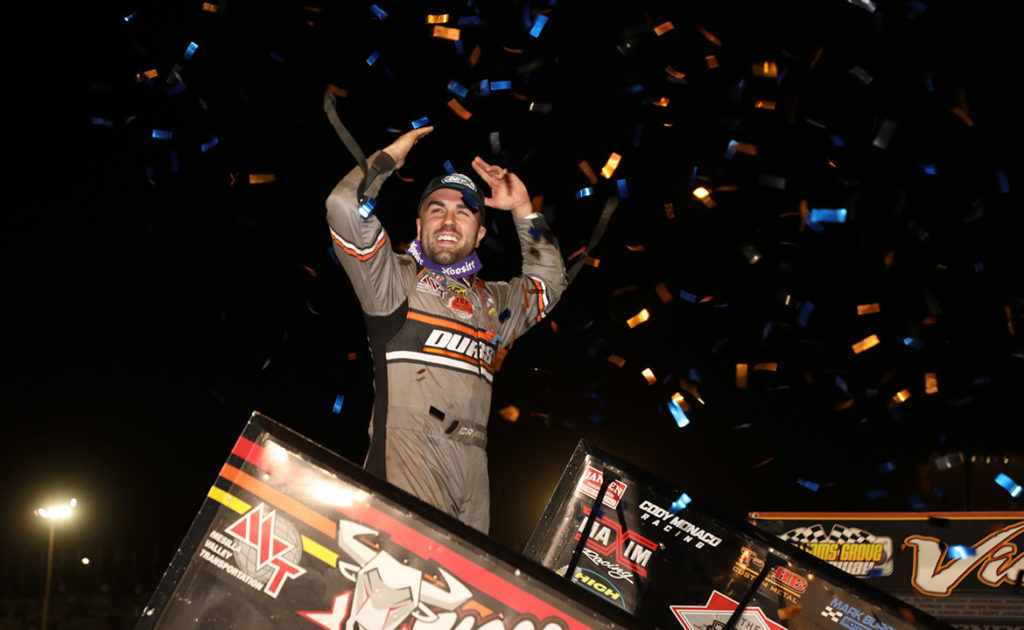 A simple point of the finger by Jason Sides gave David Gravel the assistance he needed to go on and win his third World of Outlaws NOS Energy Drink Sprint Car Series race this season.

Gravel lost the lead to Daryn Pittman at the start of the 25-lap Williams Grove Speedway Feature and 10 laps later lost second to Pennsylvanian Danny Dietrich. It looked like Gravel may have to settle for his second third-place finish in-a-row, but everything changed with 13 laps to go.

Dietrich and Gravel were nose to tail heading down the front stretch with the lap car of Sides in front of them.

“Going into (turn) one, Sides pointed low and I think Dietrich thought he pointed low like he was going to go low and Dietrich was going to go high, but he actually pointed low to pass him down low,” Gravel said. “Dietrich followed him in the corner, and I went low. So, I’m glad it worked out for me and not for him.”

That move allowed Gravel to slide back into second-place, while Dietrich fell several car lengths behind him after having to lift out of the throttle due to Sides blocking his line. Dietrich cited getting caught behind Sides was the one mistake that kept him from a potential win Friday night.

“That was the race I think for me,” Dietrich said.

With Dietrich far behind, Gravel had breathing room to try and run Pittman back down. And he didn’t waste any time. Two laps after passing Dietrich, he was on Pittman’s bumper. Gravel stuck to the low line most of the race, while Pittman stayed high. But with 12 laps to go, the two swapped lanes in turns three and four. The advantage went to Gravel.

On Pittman’s tail, he dove underneath the No. 83 Roth Motorsports car in turn one and charged his way back to the lead.

After the disappointment of losing a potential win at Lincoln Speedway Wednesday night, Gravel was not going to let another win slip through his fingers.

He prepared himself for the Feature throughout the night, studying how his car worked in different lanes. While he won his Drydene Heat race and the DIRTVision Fast Pass Dash by riding the high line, he tested the bottom during the Dash.

“I was just trying it (different lines) out all night,” Gravel said. “Luckily things worked out the way they did, and I found something better than they did.”

Once he cleared Pittman and began to pull away with the lead, Dietrich wasn’t letting him out of his sight. The blue No. 48 also got by Pittman and made his own charge for the lead. At times a blanket could be thrown over the top three.

Dietrich continued to run the high side, while Gravel stayed low. At times he would close on the No. 41 Jason Johnson Racing car, but Gravel could always out power him out of the turn, leading to his 42nd career World of Outlaws victory – and fifth Series win at Williams Grove Speedway.

The ability of the No. 41 car to drive hard through the turn without any issues has Pittman scratching his head on how he can get his car to do the same.

“We didn’t get from the center off very good,” Pittman said. “My car would drop too far and not drive down the straightaway. I think the 41 drivers really hard, a lot harder than mine and we’ve got to figure out why that is. I just start spinning way too easy.”

Gravel and his new Jason Johnson Racing team have found the level of consistency they were hoping to find at the start of the year. He’s finished in the top-five in the last four races – three of those finishes being on the podium. And with three wins now, Gravel is the winningest driver, so far, this season.

“Man, we’re trying all sorts of stuff,” Gravel said. “Every night I don’t think we run the same bar combination. Philip (Dietz, JJR crew chief) is always working, trying to make the car better. It works nine times out of 10. Hopefully we jot down the things that work really well and continue to grow as a team and keep winning races.”

His Williams Grove win has propelled the Watertown, Conn.-native to be tied for third in the Series’ points standings with Pittman – 64 points behind leader Donny Schatz, who only has a two-point lead over Brad Sweet.

With three wins in the early stage of the season, the championship isn’t on Gravel’s mind, yet. He’s focused on staying consistent and winning races.

“The past couple of races have been really good,” Gravel said. “We’re qualifying well consistently now, which is a huge part of this. If we keep that up good things will happen. Where we end up in the points is where we end up. I just want to keep winning races and try to be as consistent as we can.”

A simple point of the finger to the sky in Victory Lane Friday night made that clear.

Gravel will get the chance to sweep the weekend when the World of Outlaws return for the final round of the Morgan Cup Saturday, May 18, at Williams Grove Speedway.