PERFECT NIGHT: David Gravel is Flawless in World of Outlaws Return to Bristol 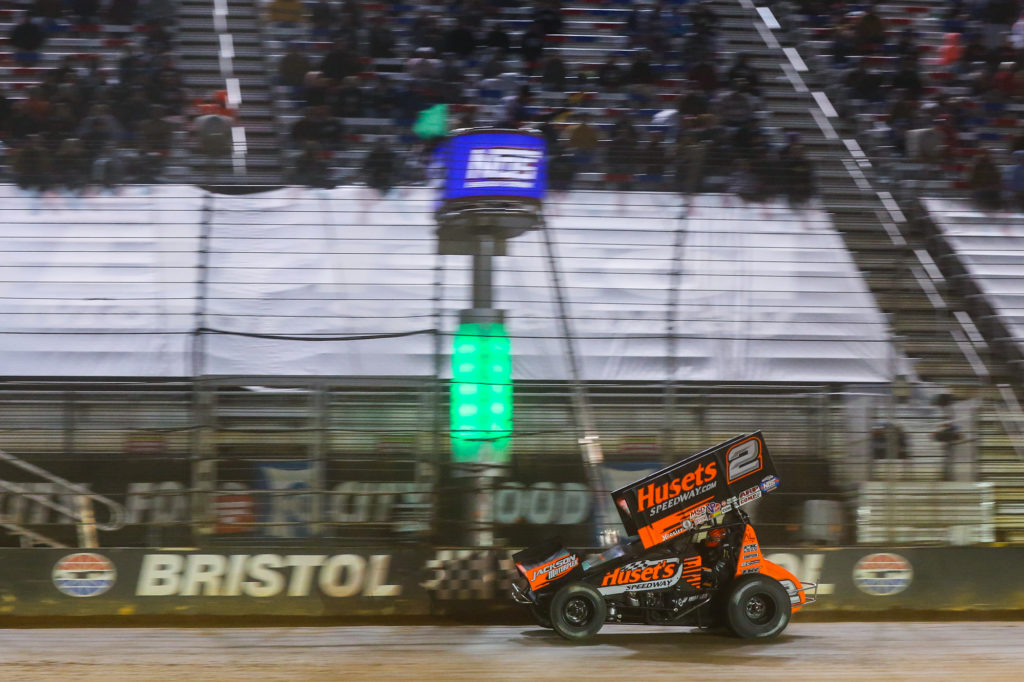 A perfect night is hard to come by against the World of Outlaws NOS Energy Drink Sprint Car Series. It’s even harder to come by at the daunting high-banked 1/2-mile of Bristol Motor Speedway.

Don’t tell that to David Gravel, though.

The Watertown, CT native paved his path to victory lane with a trail of downright domination on Friday night. His Big Game Motorsports #2 was simply unstoppable from the time the trailer unloaded. Harnessing 20 years of pent up energy, Gravel made sure he was the first, and biggest, storyline leaving Thunder Valley in the Series’ first race since 2001.

It all started with his new track record. At 13.672 seconds, Gravel clocked an average speed of 138.502 MPH; officially making him the fastest driver to ever turn laps on the dirt-covered Bristol Motor Speedway. From there, he won his Heat Race, won the Dash, and ran away with a $10,000 Feature victory, the 60th of his World of Outlaws career.

With his winning sword in hand, the newest gladiator of The Last Great Colosseum reflected on how special this opportunity is to race on a stage and venue like Bristol.

“This is so cool,” Gravel said in awe of a massive crowd. “This is just such an iconic place that everyone always talks about. I can’t thank Bristol Motor Speedway and the World of Outlaws enough for making this event happen. I hope we get to finish out this weekend and go after that $25,000 check.”

A noted ace on bigger, faster tracks, Gravel’s clean sweep of the night at Bristol equals him with Donny Schatz for the most wins (9) on 1/2-mile ovals since the beginning of 2019. His unbeatable performance on Friday marked the first perfect night of the 2021 World of Outlaws season.

“This thing has been incredible ever since we unloaded yesterday,” Gravel bragged on his Big Game Motorsports crew. “After the Heat and Dash, I told them not to change a damn thing. I just ripped down five qualifying laps there at the end to try and hold off Reutzel.”

Not just the physical size, but the stature that Bristol brings can offer true season-changing momentum. Gravel has felt his early-season resume has been lackluster at best with two wins in 14 races, but with a Bristol beatdown in his bank, he feels more and more confident heading into the crucial summer months.

“I really think we’ll kick ass at big tracks all year long,” Gravel noted with a grin. “This schedule is so unique because we’re going to a super short track on Thursday and then we’re back at a big track on the weekend. You have to be good everywhere with the Outlaws. This engine program is super stout and this team is really hitting our stride.”

Gravel’s closest contender came in the form of KSE Hard Charger Aaron Reutzel, who battled back from a pair of engine changes to roar from ninth-to-second and compete for the win in his Roth Motorsports #83. The Clute, TX native rolled by Sam Hafertepe Jr. on Lap 18 and was cutting into Gravel’s lead lap-after-lap with the aid of back markers.

By Lap 20, the gap was only five-tenths of a second and Reutzel was poised to give Gravel some heat in the closing circuits. However, a caution for Logan Schuchart changed it all.

With Gravel removed from traffic and given the benefit of clean air, his Big Game #2 proved to be too stout. Reutzel hung close with him for the first lap, but the raw speed of Gravel’s Morrison Racing Engines powered Maxim Chassis was too much to handle.

When the checkered flew on Lap 25, a dejected Aaron Reutzel crossed the line 1.871-seconds short of Gravel’s tail tank.

“That caution killed every ounce of momentum I had,” Reutzel explained post-race. “We went from ninth-to-second, we were flying through there and he couldn’t pass the lap cars. That restart gave him clean track and he was gone, though. He was the fastest car all night until lap traffic, and then I thought we were the car to beat. You have to be good to win these races, but you also have to be lucky.”

Rounding out the podium aboard the Jason Johnson Racing #41 was Carson Macedo, who was surprised, but pleased with track conditions.

“I was just searching for too long in the beginning,” Macedo explained. “I thought the bottom would be dominant, but Aaron found the top and I realized where I needed to be. I think it got a lot more racey there at the end. I can’t say enough about how cool this event is. A dream come true for me to be on the podium at Bristol.”

Following Gravel, Reutzel, and Macedo on night one of the Bristol Throwdown was Sam Hafertepe Jr. of Sunnyvale, TX, who actually led the opening two laps before Gravel went storming by. Closing out the top five was Donny Schatz aboard the Tony Stewart/Curb-Agajanian Racing, Ford Performance #15.

The rest of Friday’s top ten finishers were NASCAR sensation Kyle Larson in sixth, Gio Scelzi aboard the KCP Racing #18 in seventh, championship leader Brad Sweet in eighth with the Kasey Kahne Racing #49, Paul McMahan in ninth making his season-debut, and rookie contender Brock Zearfoss in the tenth spot.

UP NEXT – The World of Outlaws NOS Energy Drink Sprint Car Series will wrap up the Bristol Throwdown on Saturday, April 24 with a $25,000-to-win main event. Officials are bound and determined to complete the event on Saturday night, but a Sunday rain date could be used at Bristol Motor Speedway if absolutely necessary.