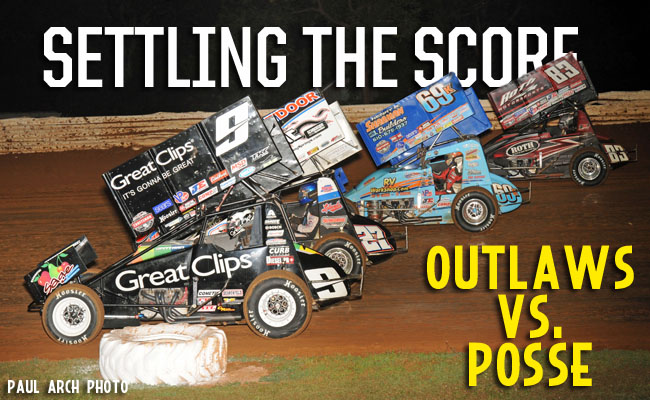 Outlaws and Posse will Settle the Score at the National Open

CONCORD, N.C. – Sept. 12, 2016 – The World of Outlaws Craftsman® Sprint Car Series returns to the Keystone State September 29 through October 1 for the historic Champion Racing Oil National Open. With 54 years of history, this three-day showdown brings some of the biggest names in motorsports to the half-mile legendary Williams Grove Speedway to settle a timeless rivalry between the Outlaws and the Pennsylvania Posse.

The Champion Racing Oil National Open is Williams Grove Speedway’s cornerstone event, with more than 40 winged-beasts soaring on the famed half-mile oval, battling side-by-side for three straight nights, all vying for the east coast’s best 3-day purse, with $275,000 in total payouts. Last year’s finale featured 48 of the best wheelmen in the business, and they mean business at the tail-end of the 2016 Outlaws season.

The Outlaws-PA Posse rivalry is currently even, 2-2, and this culminating three-day spectacular will decide where the bragging rights fall. Lance Dewease has led the charge with two Posse victories, but Dewease and company will clash with current points leader Donny Schatz and a star-studded group of Platinum drivers in just over two weeks. With more reward and a chance at the ultimate payback, who will take this round on the Outlaws’ final trip to The Grove in 2016?

Last year, Steve Smith picked up his third career event win – his first in 24 years – with Schatz coming in second. But the year before he was beat out by David Gravel in his first track win, with Schatz in second again.

The three-day program ends Saturday night with the big 40-lap feature paying $50K-to-win. Thursday and Friday feature a pair of 25-lap, $10,000-to-win mains. But more money is on the line for some special competitors.

The Beer Hill Gang has sponsored a minimum $2,000 bonus to the highest finishing rookie on Saturday night. DirtTrackDigest.com and Camp Mayhem have joined forces for the first ever “Just Missed” award, to be presented to the highest finishing driver in the Last Chance Showdown that does not earn a provisional starting spot for Saturday night’s $50,000 feature. And Williams Grove Speedway, BMJ Property Management, K.R.S. Graphics and Miller’s Racing Parts have added a Best Appearing Car Award this year that includes $500 plus a new set of front Hoosier tires for the winning team and an additional $500 to the winning car’s graphic designer.