Skip to content
Outlaws To Take on Arizona Speedway
Tags: 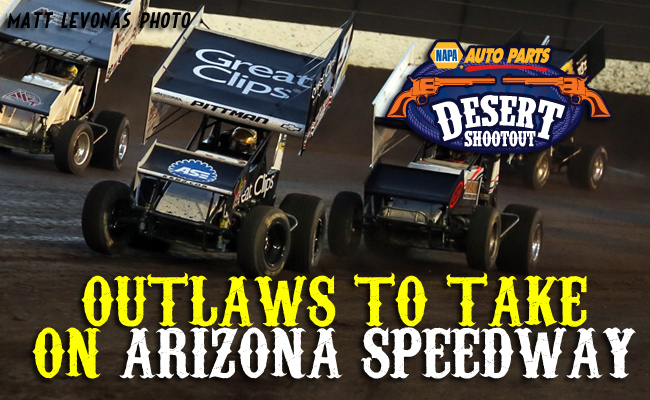 Series takes on Arizona Speedway in Queen Creek, Ariz. for the NAPA Desert Shootout on March 6

CONCORD, N.C. – Jan. 28, 2016 – The World of Outlaws Sprint Car Series and NAPA Auto Parts are returning the ‘Greatest Show on Dirt’ to Phoenix for the first time since 2009 with the NAPA Desert Shootout at Arizona Speedway on Sunday, March 6.

“Arizona Speedway is a great addition to the World of Outlaws schedule,” said World of Outlaws Sprint Car Series Director Carlton Reimers. “We are excited to partner with NAPA Auto Parts to return the series to the Phoenix market after a six season absence. We look forward to a great event for fans and NAPA customers and associates alike.”

Tickets for the NAPA Desert Shootout are on sale now and available by calling toll-free 844-DIRT-TIX (347-8849), or by visiting http://www.WorldofOutlaws.com/Tickets.

“NAPA Auto Parts is very excited to be a sponsor of the Desert Shootout,” said Chris Rice, general manager, NAPA Arizona. “Both our corporate and our local, independently owned stores have made it a priority to support local racing, its fans and its tracks throughout Arizona. A race of this type and its caliber in the Phoenix market is going to be thrilling. We hope we can be of service to anyone who enjoys the sport as much as we do. We hope to see you at the track!”

The event will be the first 2016 partnership between the World of Outlaws and NAPA Auto Parts. NAPA is a longstanding partner of the series and is the title sponsor for the series’ second trip to Arizona. The NAPA Wildcat Shootout brings the Outlaws to Tucson’s USA Raceway on Monday, April 18.

The last time the series took on a track in the Phoenix area was when Manzanita Speedway played host to the World of Outlaws for the final time in 2009. Until that point, the series had been a regular, yearly presence in the city.