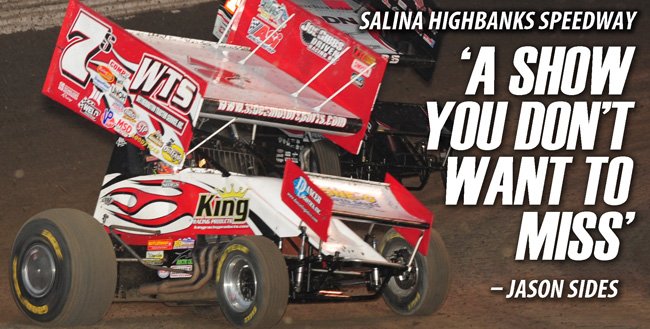 World of Outlaws Gearing Up to Tackle Salina Highbanks Speedway

CONCORD, N.C. – April 18, 2011 – The World of Outlaws Sprint Car Series will be a part of the re-opening season at the Salina Highbanks Speedway in Salina, Okla., on Tuesday, May 3, following the rainout of the originally scheduled race on Saturday, April 23. The stars and cars of The Greatest Show on Dirt will run in tandem with local factory stock drivers to put on a show that Midwestern fans will never forget.

While this will be the first time that many of the drivers and teams on the World of Outlaws series tour have seen the track, one driver already has experience and looks forward to the challenge.

“I was at Salina for a show about 15 years ago,” said Jason Sides, driver of the #7s Wetherington Tractor Service Maxim from Bartlett, Tenn. “It’s a great track to race on and the fan support is just awesome. Everyone should come out because it will be a show you don’t want to miss.”

Sides has two victories already this season, and begins the World of Outlaws Sprint Car Series Midwest swing hungrier than ever. Four-time series champion Donny Schatz will also be aiming for the top spot as will 2010 Champion Jason Meyers. Of course who can count out Steve Kinser? The King of the Outlaws from Bloomington, Ind., began the season on fire, winning four of the first seven events and looks to add more trophies in his 2011 campaign and an unheard of 21 title.

Leading all the drivers in the championship standings is Joey Saldana. The Kasey Kahne Racing superstar has been fast all season and picked up victories in Las Vegas and Tulare, Calif. Saldana’s KKR teammate, Cody Darrah, continues to bring thrills and excitement to each track he visits on his rookie tour. Finally, the Big Game Motorsports duo of Sammy Swindell and Craig Dollansky have combined for three victories in 2011 and are looking for even more success in the Midwest.

This is the only stop of the season in Oklahoma for the World of Outlaws series as they compete coast to coast with all dirt roads leading to the World Finals at the Dirt Track at Charlotte in November.