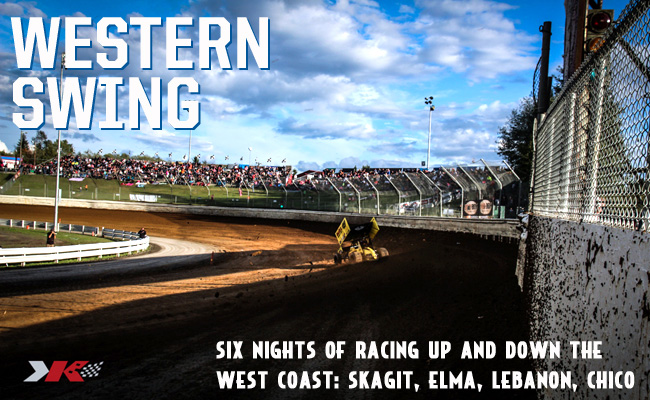 ALGER, Wash. – August 31, 2016 — On the strength of four wins in a row since the Knoxville Nationals Fargo, North Dakota’s Donny Schatz leads the World of Outlaws Craftsman Sprint Car Series into the Western Swing, beginning this weekend at the Skagit Speedway in Alger, Washington.

The Western Swing in 2016 encompasses six nights of racing up and down the left coast, including events in Skagit; Elma; Lebanon, Oregon; and Chico, California.

Since finishing second at the Knoxville Nationals, Schatz has been on fire, claiming the last four series events at the helm of the Tony Stewart Racing No. 15 machine.

Schatz earned a sweep of the World of Outlaws Craftsman Sprint Car Series events in Skagit during the 2014 season, in addition to winning the last three races at Grays Harbor Raceway in Elma, the site of Monday night’s race. To top it off he is also the defending Gold Cup champion at Silver Dollar Speedway in Chico. His most recent win on Sunday night in his home state of North Dakota marked his 20th overall triumph this season.

The question everyone will be asking is can anyone beat Schatz? If someone can, it may very well be Bixby, Oklahoma’s Shane Stewart, who captured last year’s visit to Skagit Speedway and is a two-time Dirt Cup champion in his career at the track. Stewart has also won in the past at Willamette Raceway and scored opening night at the Gold Cup Race of Champions last season. He has scored five wins so far this season aboard the Larson Marks Racing No. 2 and hopes to add on to that during the Western Swing.

“We look forward to getting back to Skagit Speedway this weekend,” Stewart commented. “After winning there last year it definitely gives us confidence going back this Friday & Saturday. Skagit has always been a good track for me and hopefully that will be the case this weekend. A strong run can certainly set the tone for the Western Swing. Everything sort of winds down after the swing as well, so we definitely look forward to having six nights of racing this next week.”

Grass Valley, California’s Brad Sweet is second in points going into the swing and will hope to bring home his first Gold Cup triumph at the end of the end of it. The driver of the Kasey Kahne Racing No. 49 has raced to seven victories so far this season. Owasso, Oklahoma’s Daryn Pittman; Watertown, Connecticut’s David Gravel & Brownsburg, Indiana’s Joey Saldana round out the top-five in points going into the Western Swing.

Sweet, Pittman and Gravel are locked in a hotly contested battle for the runner up spot in the standings, as just seven-digits separate the trio. All three traditionally run strong on the West Coast. Completing the top-10 in the standings are Stewart; Eunice, Louisiana’s Jason Johnson; Hanover, Pennsylvania’s Logan Schuchart; Bartlett, Tennessee’s Jason Sides and Nashville, Tennessee’s Paul McMahan.