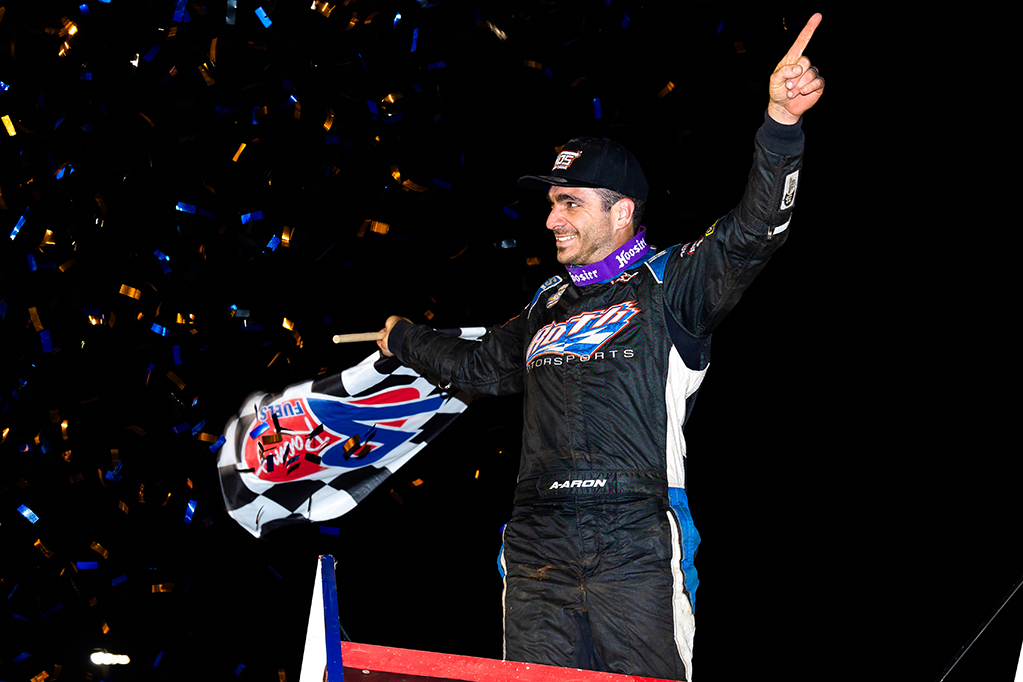 With the aid of Aaron Reutzel, the World of Outlaws NOS Energy Drink Sprint Car Series completed a clean sweep of the PA Posse on Saturday night.

It was his fourth-career triumph at the iconic Mechanicsburg, PA 1/2-mile, but his first on the grand stage that is the Outlaws vs. Posse rivalry. Saturday’s score was also his second of the 2021 season aboard the Roth Motorsports #83.

Reutzel’s fourth-career World of Outlaws win didn’t come without challenge; Gio Scelzi and Lance Dewease made it interesting down the stretch of the 30-lapper, but failed to make a move for the lead.

“To win at The Grove is one thing, but winning an Outlaw show at The Grove is pretty incredible,” Reutzel remarked in victory lane. “There are a lot of guys that haven’t done that. It’s an honor to put my name on that win list. We’ve been struggling this last month, but we went back to work and found our qualifying speed again, and now here are back in victory lane.”

Jetting to the lead once the green flag dropped, Reutzel set sail on the field while all eyes turned to Lance Dewease’s #69K after a wild 10th-to-5th charge on the opening lap.

Scelzi settled into second aboard the KCP Racing #18 and Kerry Madsen dropped into third in his Tony Stewart/Curb-Agajanian Racing #14. The leaders ran through traffic in the opening stages, but it got good when Dewease started to charge in the second half with a slider on Madsen for the third spot.

Dewease began approaching Scelzi for second as both started to cut into Reutzel’s advantage with less than ten to go. Lap traffic helped assist their run to the #83’s back bumper, and it actually got real close in the final laps.

As Reutzel elected to go low, Scelzi stayed committed to the top and continually made ground on him. He was hounding him at times, but Reutzel was never bothered. He aced the bottom lap-after-lap and eventually extended his lead as Scelzi bobbled on the top side.

Ultimately, Reutzel crossed the finish line ahead of Scelzi by 2.190-seconds.

“I was going by lap cars up there real easily in the beginning, so I knew it was time to go to the bottom when the lappers were pulling away from me,” Reutzel mentioned on his decision to swap lanes. “Sometimes it’s good to be in lap traffic just so you can judge your speed off them. I was real glad it went green-to-checkered there.”

Coming home with a season-best finish of second-place was Giovanni Scelzi of Fresno, CA in his KCP #18.

“I ran as hard I could for 30 laps, man,” Scelzi said. “It’s hard to be disappointed with second, though. I caught him and knew it was taking rubber, but I was committed to the top at that point. It sealed the deal when I missed it coming to three-to-go. Still a great run for us.”

Rounding out the podium and earning KSE Hard Charger honors was Lance Dewease with a tenth-to-third bid. His run towards the front was halted by lap traffic and track conditions alike.

“I thought we were really good, but it started rubbering up and that hurt our setup,” Dewease noted. “That lapper wasn’t doing nothing wrong, but he was just in the way for my entry. Starting 10th and running third against these guys, though, that makes me happy.”

UP NEXT – The World of Outlaws NOS Energy Drink Sprint Car Series will take two days off before resuming its eastern swing on Tuesday, May 18 at the newly-reconfigured Bridgeport Motorsports Park in Swedesboro, NJ.