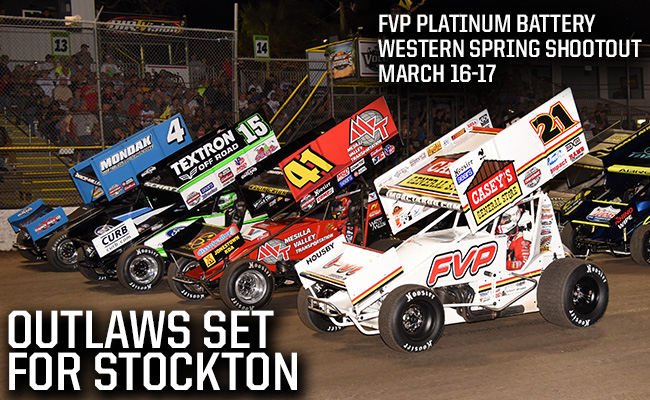 CONCORD, NC – The World of Outlaws Craftsman Sprint Car Series is anxiously awaiting to continue its 40th Anniversary Season and will get to do so this weekend at the Stockton Dirt Track with the running of the FVP Platinum Battery Western Spring Shootout Friday, March 16 and Saturday, March 17. The unfortunate story of 2018 has been pesky Mother Nature taking four of the ten scheduled events, including the second night last weekend at Thunderbowl Raceway.

When weather hasn’t been a factor, The Greatest Show on Dirt has lived up to its name to the fullest. With six events in the books, not one has been won from the pole, and each Feature has seen at least one pass for the lead.

Nine-time Series Champion Donny Schatz is firing on all cylinders winning three of those events to grab the early points lead. 2017 Kevin Gobrecht Rookie of the Year Sheldon Haudenschild aboard his new ride, the Stenhouse Jr-Marshall, NOS Energy Drink-powered No.17, has opened eyes capturing his first two Outlaw wins early in the campaign.

As the Series hit California last weekend in Tulare, a fierce battle between the California locals and the Outlaw regulars was expected, but it was Texas invader Aaron Reutzel who stole the victory in exciting fashion for his first career Outlaw triumph.

Now all eyes shift to Stockton as a stout field of competitors is expected to tackle the 3/8-mile facility this weekend for the FVP Platinum Battery Western Spring Shootout. “Everyone here at FVP is looking forward to the FVP Platinum Battery Western Spring Shootout at Stockton. It was an outstanding field of cars and drivers last year and we are looking for more of the same this weekend,” said FVP Senior Brand Manager Amber Misunas. Last year, it was the hometown Outlaw Brad Sweet who captured his first victory of the season at Stockton after Mother Nature took night one.

“We race all over the country, so it’s always nice to be home and sleep in your bed in between races. Every driver likes to race in their home state in front of their family and friends,” Sweet, of Grass Valley, CA, said about racing in the Golden State.

Last year, Stockton attracted the highest car count of the West Coast swing at 39, and with last weekend’s race at Tulare garnering 43 entries, there’s no reason to believe that this weekend’s FVP Platinum Battery Western Spring Shootout won’t be one of the toughest fields the World of Outlaws Craftsman Sprint Car Series will see all season.

Tickets for the FVP Platinum Battery Western Spring Shootout can be found here. If you can’t make it to the track, be sure to watch all the action LIVE on DIRTVision.com!