Outlaws Roll to Calistoga This Weekend 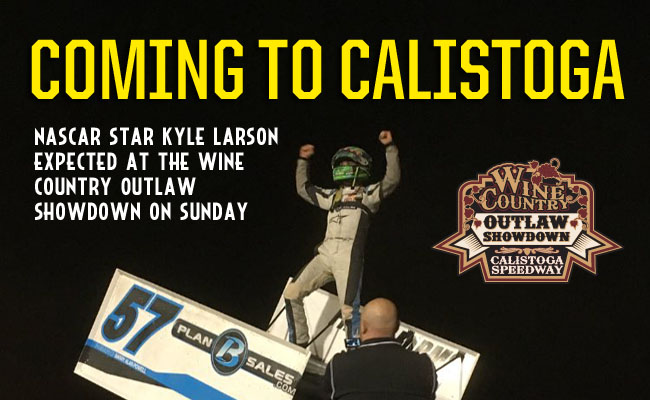 Calistoga, CA – April 5, 2016…The world’s most beautiful dirt track is set to come alive for the first time in 2016 when the World of Outlaws Craftsmen Sprint Car Series make their only appearance of the season at Calistoga Speedway’s famed half-mile this Saturday & Sunday.
Over the last couple years the Calistoga Speedway has seen a total transformation thanks to the hard work of some dedicated individuals. In addition to the various facility upgrades that include a booming new sound system, fencing & scoreboards, lots of work went into the racing surface, which is now wider with smoother transitions into the corners. If you haven’t been back to Calistoga in a few years, make this weekend the time to do just that.
The Wine Country Outlaw Showdown is also the final Northern stop during the early California swing for the World of Outlaws and marks their first time back on a half-mile since Las Vegas in early March. The historic track is always a must visit for long-time Northern California fans and this weekend will be another must see showcase, with the “Greatest Show on Dirt” and some special entrants set to tackle the Napa County Fairgrounds venue.
California native Brad Sweet leads the World of Outlaws Craftsmen Sprint Car Series into the Calistoga Speedway on Saturday & Sunday. The Grass Valley, CA driver picked up his fourth victory of the season last Friday in Watsonville and goes into the Wine Country Outlaw Showdown leading the standings by 79-points. Sweet has also captured opening night in Calistoga each of the last two years and will be gunning for more Calistoga glory this weekend aboard the Kasey Kahne Racing No. 49 machine.
Bixby, Oklahoma’s Shane Stewart; Owasso, Oklahoma’s Daryn Pittman; Fargo, North Dakota’s Donny Schatz and Brownsburg, Indiana’s Joey Saldana round out the top-five in the World of Outlaws standings going into the weekend. Schatz captured his series leading fifth main event victory of the season last Saturday in Chico and is the defending winner of the Wine Country Outlaw Showdown. The seven-time WOO champion has raced to four Calistoga Speedway triumphs in his career.
Former King of the West Series champion & current NASCAR Sprint Cup Series competitor Kyle Larson is also expected to be on hand for the Sunday portion this weekend. The Elk Grove, CA wheel-man is coming off a solid third place finish in Martinsville and will compete in Texas this Saturday night, prior to coming back to his home state for Sunday’s action. Larson has two career Calistoga Speedway wins, but is still looking for his first Winged Sprint Car victory at the track. It will also be the 23-year-old Larson’s first Sprint Car start in California since winning the Trophy Cup in 2013.
After competing with the NASCAR Camping World Truck Series last week in Martinsville, Rutherford, CA favorite Rico Abreu returns to California this Saturday & Sunday. The 24-year-old ended the Calistoga Speedway season last September by winning the Louie Vermeil Classic for the second consecutive year. Overall Abreu has captured nine career wins at the track across Winged & Wingless Sprints, along with Midgets. The one thing he is still looking for however is a World of Outlaws Craftsmen Sprint Car Series triumph at his home track.
“It would really mean a lot to win a World of Outlaws race at Calistoga Speedway,” Abreu said. “The track has become such a fun place to race at with all the work that has gone on. The racing the last few seasons has been outstanding and I know that everyone is excited about this weekend. We’ve been fortunate enough to win the Louie Vermeil Classic the past two years, but winning an Outlaw feature there has certainly been something that’s on my bucket list. I always have a lot of friends & family there as well, so I hope to put on a good show for them.”
Also sharing the spotlight during the Wine Country Outlaw Showdown will be the new All Star Modified Tour on Saturday & the Wingless Sprint Car Series presented by Hunt Magnetos on Sunday. The All Star tour will bring the top Dirt Modified drivers in the state to the half-mile for the first time since 2012. The Hunt Series made an exciting Calistoga Speedway debut last season with Colton Slack & Terry Schank Jr. tallying victories in the two appearances. The outing alongside the World of Outlaws last year saw Slack claim a thriller after battling with local favorite’s Joe Stornetta & Schank.
Please note that racing during the Sunday night program is scheduled to begin an hour earlier than Saturday. Opening ceremonies are scheduled to begin at 7pm on Saturday, while Sunday will see opening ceremonies at 6pm to help get everyone on the road at a decent hour.
The main gate for spectators will open at 3pm each day, with Will Call & the Ticket Window opening at noon both days. Two-night weekend tickets and single night tickets are available by visiting http://dirtcar.ticketforce.com/eventperformances.asp?evt=163
The Calistoga Speedway is located on the scenic Napa County Fairgrounds in Calistoga, California at 1435 North Oak Street and has been in existence since 1937. For more on the World of Outlaws Craftsmen Sprint Car Series visit www.woosprint.com and for history on Calistoga Speedway log onto http://www.hammerdownusa.com/calistoga.htm