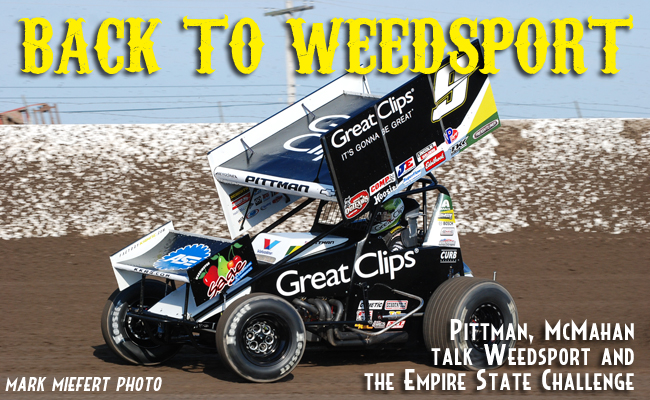 WEEDSPORT, N.Y. – May 12, 2015 – The World of Outlaw Sprint Car Series will return to Weedsport Speedway for the first time since 1993, but when drivers and fans alike head to the three-eighths mile clay oval, they will see a completely renovated, state-of-the-art racing facility.

The Empire State Challenge is scheduled to take place Sunday, May 17 with pit gates opening at 3 p.m. and grandstands opening at 5 p.m. Hot laps will start at 6 p.m. followed by qualifying at 6:40 p.m. and opening ceremonies at 7 p.m.

Tickets cost $39 for reserved seating admission and $35 for general admission, while children 10 years old and under are free. Tickets can be purchased online at dirtcar.ticketforce.com.

Since last season, the track owned by Allan Heinke and managed by Jimmy Phelps has undergone more renovations. The expanded grandstands now feature reserved seating in the top five rows, and other improvements include the new Pavilion at Weedsport concessions and more paved areas.

Among the World of Outlaws Sprint Car Series racers heading to Weedsport for the Empire State Challenge are No. 51 CJB Motorsports driver Paul McMahan and No. 9 Kasey Kahne Racing driver Daryn Pittman.

McMahan said he always enjoy racing in New York and has had success in the state throughout his career. He also noted that the series returned to Placerville Speedway in California earlier in the season and now returns to Weedsport.

“One of the great things about the World of Outlaws is the opportunity to run at new racetracks every year,” he said. “No one really goes in there with any kind of advantage. No one has the track figured out. These guys are the best in the world, though, so you always know whether we’ve been there before or not, that they are going to be tough to beat.”

Pittman said he has raced at Weedsport before – finishing second with Mike Heffner’s No. 27 car in a URC 360 race after leading every lap except the last corner and getting beat by Randy Hannagan when a lapped car got in his way.

“It was a cool place. It was the only time I’ve been there. It had tight corners, a little bullring. Turn 1, I remember being a little tricky,” he said. “I’m definitely looking forward to it. It should be interesting seeing what 410s do on it. It was a typical New York track – slick and you’ve got to really work on your car to get going around there.”

Billy Decker, driver of the No. 91 Gypsum Racing modified and the reigning Super DIRTcar Series champion, heads to Weedsport after earning the win in the Hall of Fame 100 in August the last time the big-block modifieds competed at the racetrack.

With that win in mind, along with a victory in the most recent series race at Fulton Speedway, Decker said he looks forward to getting back to Weedsport. He also noted the historic speedway used to be a weekly home for many of the big-block modified racers and now reclaims its venerable status after the renovations.