Outlaws Return to Las Vegas in 2016 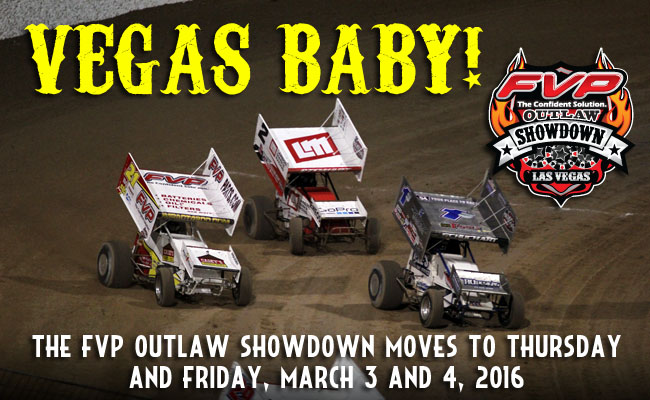 CONCORD, N.C. – Oct. 27, 2015 – The World of Outlaws Sprint Car Series announced the 2016 return of the FVP Outlaw Showdown to The Dirt Track at Las Vegas Motor Speedway will be on Thursday and Friday, March 3 and 4, during the track’s biggest weekend of racing.

The FVP Outlaw Showdown in 2016, which features not only the World of Outlaws but also the non-wing USAC West Coast Sprint Series and IMCA Modifieds, better coincides with the weekend NASCAR events at Las Vegas Motor Speedway after historically taking place midweek.

“Is there a more natural fit? The ‘Greatest Show on Dirt’ and the ‘Entertainment Capital of the World’ yearly provide one of the most anticipated two-days of racing on the World of Outlaws schedule,” said World of Outlaws Sprint Car Series Director Carlton Reimers. “We are excited to continue our great partnership with Las Vegas Motor Speedway and make this great event even more accessible to our fans.”

Last year’s FVP Outlaw Showdown saw two days of action-packed racing. On night one, Shane Stewart fought a fierce battle with Brian Brown to claim his first series win of the season. It was also the first victory of the year for the Larson Marks Racing team in its first full season with the Outlaws. Then, on night two, fan favorite Terry McCarl set a blistering pace to claim his first Outlaws win in nearly two seasons.

Tickets for the FVP Outlaw Showdown on March 4 and 5 are now on sale. Learn more and purchase your tickets by visiting www.WorldofOutlaws.com/Tickets, or by calling 1-844-347-8849.