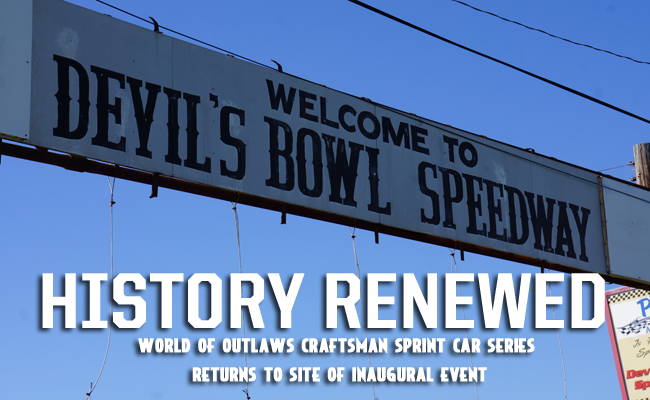 CONCORD, N.C. – April 5, 2017 – Every time the World of Outlaws Craftsman® Sprint Car Series visits Devil’s Bowl Speedway, there’s an imposing historical atmosphere surrounding the event. The Mesquite, TX track was the site of the first-ever World of Outlaws race in 1978.

The 2017 Texas Outlaw Nationals at Devil’s Bowl Speedway on April 14 & 15 features a purse of over $100,00 and marks the fourth consecutive year, and 26th year overall, the Outlaws have raced the track where Ted Johnson, with the help of the late Lanny Edwards, created what would become ‘The Greatest Show on Dirt’.

Before the Outlaws eventually became his full-time gig, Johnson was a china importer salesman from Madison, WI who had moved to Wichita Falls, TX. He saw his first Sprint Car race in 1970 and was hooked. He promoted a handful of big money Sprint Car races in the early 1970s before taking a stab at a short-lived series called ‘The Racers’ in 1974.

In 1978, he envisioned a new series, which he called the World of Outlaws. It was a catchy name that eventually gained traction, but initially many didn’t like it, including Edwards, his friend and the Devil’s Bowl track promoter.

“He wanted to call it the World of Outlaws and everybody thought that was the worst name you could call it,” Edwards said in a 2016 interview. “Those people didn’t know what they were talking about, and I was probably one of those included.”

The premise of the series was simple. Drivers paid a $10 membership fee to Johnson, who would only sanction races with a minimum $2,000-to-win purse. Johnson would pay out a point fund to the overall series champion who would be named ‘King of the Outlaws’.

“He only had about four drivers that were going to follow him. I didn’t think he would make it one year,” Edwards said. “He didn’t have any money. He worked for a glass crystal company, but he was a better talker about racing than he was about glass crystal.”

“I can remember the race we had back in 1978 so plain,” Edwards said. “We had the biggest field of cars here that weekend that had ever been assembled. We had 96 Sprint Cars. They had never had that many anywhere. That’s an accomplishment of Ted Johnson.”

Among the drivers to run for Johnson in that first season was Steve Kinser. The future Hall of Famer had never met Johnson before that first race on March 18, 1978. Little did either know at that time Kinser would go on to star as the greatest Outlaw of all-time with 20 series championships and 577 career victories.

“We knew we were going to be running for better money than we were at a local race,” Kinser said. “It was the start of getting the purses higher.”

Johnson proved Edwards and several others wrong over the next three decades. Forty years later, the Outlaws remain the foremost national 410 Sprint Car series. While Johnson may have faced an uphill battle initially, the series eventually thrived with the support of big name drivers and several promoters willing to take a chance.

“There were a handful of drivers and a handful of promoters that got it all started,” Kinser said. “Earl (Baltes) and Lanny (Edwards) were the two major ones who took the chance to promote all the races. Once all the promoters in the United States started to see us fill the grandstands, it didn’t take long for us to get a big schedule.”

Johnson’s series continued to grow after that first season, and quickly evolved into a national tour with stops at all of the biggest dirt tracks across the country.

“Back in those days, if Ted had run a World of Outlaws show on Sunday morning at 6am, the stands would have been full,” Edwards said. “It didn’t make a difference when you would run them. They just had the following.”

Carlton Reimers, Johnson’s son-in-law after marrying his daughter Lesa in 1984, has worked with the series since 1992 and has been the Series Director for over a decade. Reimers learned the ropes of Sprint Car and dirt track racing under Johnson. He recognized the strong relationships Johnson had with drivers as a big part of the Outlaws’ success.

“He developed personal relationships with the drivers, owners and crewmembers,” Reimers said. “He listened to what they had to say. He encouraged their input and acted on that input when possible. He made sure the teams were an integral part of the organization. Consequently the teams developed a great sense of pride concerning Ted and the organization.”

Although Edwards credits Johnson for much of his success, Reimers is quick to point out that Edwards was equally important to getting the Outlaws off the ground.

“Lanny wasn’t just a friend to the top guys, he was a friend to everybody,” Kinser said. “He tried to treat everybody as well as he could. He tried to help everybody out that traveled to his race. He was just that type of guy.”

While Johnson sold the World of Outlaws in 2003, the tradition and core values of the series remain constant today. As a result, the historical connection to the Outlaws’ roots at Devil’s Bowl makes it an important event on the series calendar each year. Kinser is retired from active World of Outlaws competition, but he recalls the excitement of returning to Devil’s Bowl each season.

“I spent a lot of time with Lanny at races,” Kinser said. “We became good friends, so it was always a special place for me to go. I was never the best at Devil’s Bowl. I won quite a few races, but I had a lot of difficulty timing on real heavy racetracks.”

To date, the Outlaws have contested 57 races at Devil’s Bowl and five since returning to the track in 2014 to end an 11-year absence. Joey Saldana and Shane Stewart split last season’s races on Aprill 22 & 23 while Donny Schatz won in back-to-back years in 2014 and 2015. Daryn Pittman also scored a win on April 19, 2014 in the Outlaws most recent era of action at Devil’s Bowl.

The 2017 Texas Outlaw Nationals will wrap-up the 2017 Kick-Off Tour for the World of Outlaws Craftsman® Sprint Car Series. Drivers will chase over $100,000 in prize money over the course of the two-day event at the high-banked half-mile.

Advanced reserved tickets for the 2017 Texas Outlaw Nationals are available online at dirtcar.ticketforce.com or by calling 844-DIRT-TIX (844-347-8849).