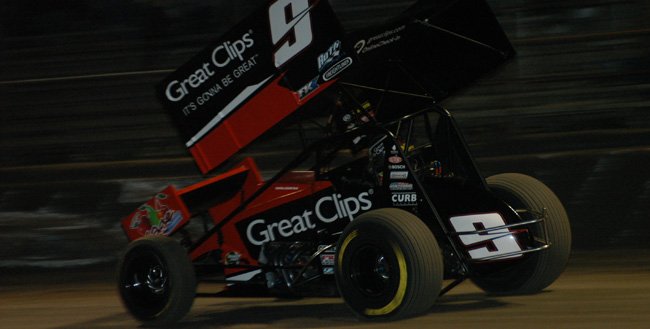 BARBERVILLE, Fla. — Feb. 14, 2012 — With scattered, white clouds and a persistent breeze all afternoon, the World of Outlaws ushered in the 2012 season on Tuesday.

Although it was officially only a practice, the sessions kicked off the 41st annual UNOH DIRTcar Nationals Presented by Summit Racing Equipment, which runs through Feb. 25 at Volusia Speedway Park in Barberville, Fla. The first sprint car feature begins tomorrow – Feb. 15 – with two days of UNOH All Star Circuit of Champions competition before the World of Outlaws hit the track Feb. 17-18-19 to decide the event’s sprint car champion.

A total of 20 sprint car drivers were split into three segments of three hot-lap sessions. Sammy Swindell posted the quickest lap overall in the first session at 13.216 seconds. That mark was good enough for an average lap of 136.199 miles per hour.

NASCAR star Tony Stewart had the second-best lap with a time of 13.270 seconds (135.644 miles per hour) in the fourth overall session. Stewart was the quickest in two of his three times on the track as was Steve Kinser, whose car is owned by Stewart.

Daryn Pittman was also fastest in two of his three sessions, while Dale Blaney and Joey Saldana were each quickest in a session.

“I figured we better come out here tonight and make sure we have everything okay,” Saldana said. “That last run there we actually had a really good time. The car was rolling pretty good, so I’m looking forward to coming tomorrow and hopefully having a good week at Volusia.”

With the sprint car competition beginning tomorrow, the usual dozen Outlaws will likely compete all week. Additionally, there are a host of other sprint car stars who will challenge for the top prize. Among those is former World of Outlaws champion Danny Lasoski, who claimed the UNOH DIRTcar Nationals Presented by Summit victory in the 2008 finale at Volusia Speedway Park.

“You know when you go to Florida … you see how you stack up,” said Lasoski, who ranks sixth in World of Outlaws feature wins. “Everybody’s got brand new stuff. The air is usually sea level or better so the engines are hitting hard. It’s the ingredients for a great show.”

Pittman is another former winner as he was victorious in the 2007 UNOH DIRTcar Nationals Presented by Summit finale. Pittman, who sits tied for 14th on the Outlaws victory list with 30 feature wins, competed on the tour for nearly a decade and often began his season at this event.

“The competition level is so good,” he said. “The best cars are here.”

In addition to the World of Outlaws drivers, here are a handful of other notable drivers who are slated to compete in this week’s UNOH DIRTcar Nationals Presented by Summit: