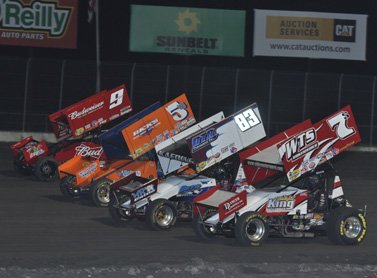 CONCORD, N.C. — Feb. 17, 2011 — The most challenging schedule in motorsports is about to kick into high gear as the World of Outlaws Sprint Car Series prepares for a huge weekend of racing in Mississippi and Texas on Friday, Feb. 25, and Saturday, Feb. 26.

The road to the 2011 World of Outlaws championship goes through Pike County Raceway in Magnolia, Miss., where the Outlaws last raced in 2007 on fast 3/8ths-mile track with Joey Saldana taking the checkers.

“Pike County is a great little race track and I’m very glad that we will be going back there so early in the season,” said Saldana at last week’s season opening 40th Annual DIRTcar Nationals by UNOH in Florida. “It should be a great momentum builder for us.”

Saldana will be looking for a repeat but will have to hold off the Tony Stewart Racing duo of Steve Kinser and Donny Schatz. Both drivers had strong runs coming out of the season opener at Volusia Speedway Park with Kinser taking two of the three nights of World of Outlaws action. Not to be forgotten are Craig Dollansky and Saldana’s Kasey Kahne Racing teammates Cody Darrah and Paul McMahan.  All three drivers made headlines in Florida with Dollansky leading 51 laps, Darrah making impressive runs towards the front and McMahan setting a blistering track record.

After the Greatest Show on Dirt competes at Pike County, it heads south to compete the following night at Royal Purple Raceway, formerly known Houston Raceway Park. The lone Texas event on the 2011 schedule is a favorite among the drivers.

“Houston is one of the best facilities we race at all year,” said 2010 World of Outlaws Series champion Jason Meyers. “It’s a nice wide race track so we’re looking forward to putting on another great show for the fans down in Houston.”

Last year’s race resulted in a thrilling shootout between eventual winner Jason Sides and Tim Kaeding. Sides is already on a roll this year after picking up his the ninth World of Outlaws victory of his career on the final night of action at Volusia Speedway Park. He aims to repeat at the state-of-the-art facility in near Houston.

Tickets for the World of Outlaws events at Pike County Speedway and Royal Purple Raceway are $35 in advance for adults and $15 in advance for kids ages 6-12, with a $5 discount on adult tickets at participating O’Reilly Auto Parts Stores. Pit combos are also available for advance purchase for $38 which includes a Grandstand Ticket and a Pit Pass. Tickets can also be purchased in advance online at www.RoyalPurpleRaceway.com or by phone at 281-383-7223, at Pike County Speedway by calling the track at (504)394-5530 as well as from SLS Promotions by visit www.SLSPromotions.com or calling 815-344-2023.