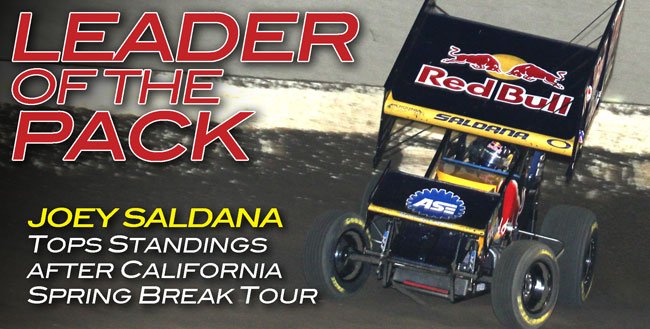 CONCORD, N.C. – April 6, 2011 – The World of Outlaws Sprint Car Series California Spring Break tour has yielded some exciting results: In four A-mains there were four different winners, seven different drivers led laps, a different driver won the pole for each event, and the crowd at Calistoga Speedway for the finale of the tour was standing-room-only. The drivers truly lived up to the series moniker, The Greatest Show on Dirt.

Craig Dollansky kicked off the swing by earning his first victory of the season in the Mini Gold Cup on March 12 at always exciting Silver Dollar Speedway in Chico. Dollansky, of Elk River, Minn., narrowly missed victories in February at the DIRTcar Nationals but left no doubt at Silver Dollar. Dollansky has led a series high 89 laps this season in the Big Game Treestands Maxim.

After heavy rains postponed the event on March 18 at Giant Chevrolet Kings Speedway in Hanford with only the A-main to run, the Outlaws made the short drive over to Tulare on March 19 to compete at Thunderbowl Raceway. Kerry Madsen was the early leader but the night belonged to Joey Saldana, who held off hard-charging hometown favorite Jason Meyers to earn his second victory of the season in Kasey Kahne Racing’s Red Bull Maxim.

The final weekend of the Spring Break tour was a thrilling display of polar opposites. On Friday, April 1, the Outlaws raced on tiny quarter-mile Merced Speedway for the first time in series history. The veteran three-time champion Sammy Swindell mastered the bullring by setting a track record and leading the final 39 of 40 laps for his second victory of the year. A night later, the series returned for the first time since 2007 to half-mile Calistoga Speedway, where several cautions and red flags tested the competitors’ patience. Jason Sides held off numerous challenges then had to get back around the sputtering car of leader Craig Dollansky on the final corner to win for the second time this season and the 10th time in his World of Outlaws career.

Heading into the last off weekend until October, it’s a great time to recap the season so far and look forward to the Midwest stretch ahead:

With a strong showing at Calistoga, Joey Saldana moved past Steve Kinser to take the lead in the World of Outlaws Sprint Car Series championship standings. The Kasey Kahne Racing star holds a four-point advantage over Kinser on the strength of two wins and eight Top-5’s. Saldana has also set quick time twice this season.

Steve Kinser continues to look strong in the Bass Pro Shops/J.D. Byrider/Chevrolet as he attempts to capture an unbelievable 21st championship. The native of Bloomington, Ind., started the season on a tear by winning four of the first seven races. Now second in points behind Saldana, Kinser looks forward to making his way back to the Midwest and continuing his impressive start.

Jason Meyers has positioned himself in third in points as the series swings back to the Midwest. A California native who spent nearly the entire month at home, Meyers is trying to defend his 2010 series crown but is still seeking his first win of 2011. He led his first laps of the year and nearly won at the Thunderbowl before settling for second, he has earned the pole for the postponed A-main at Giant Chevrolet Kings Speedway and has four Top 5’s and nine Top 10’s overall.

Kinser’s teammate at Tony Stewart Racing and four-time champion Donny Schatz continues to show his drive for a fifth championship is gaining momentum in the STP/Armor All/Chevy J&J. Schatz used strong finishes at Silver Dollar, Thunderbowl and Merced to position himself in the fourth spot, still searching for his first victory of the year. He has six Top-5 runs and seven Top-10’s in addition to setting quick time on March 2 at Las Vegas Motor Speedway.

Jason Sides is off to an exceptional start to the 2011 season in the #7s Wetherington Tractor Service Maxim. He earned his first victory of the season on the final night of the DIRTcar Nationals, then the native of Bartlett, Tenn., posted back-to-back runner-up finishes and capped off the California swing with a thrilling victory at Calistoga. Sides eager not only for the upcoming events April 15 at Paducah International Raceway and April 16 at I-55 Raceway, but as one of the few Outlaws who have raced at the Salina (Okla.) Highbanks, he is definitely aiming for more success there on April 23.

Sammy Swindell continues to amaze in the #1 Big Game Treestands car. His performance in winning at Merced, holding off Tim Kaeding to the checkered flag for his second victory of the year, put his competitive spirit and knowledge in full display. Swindell has two quick times, two victories and six Top-5 finishes, good enough to be sixth in the overall standings.

Craig Dollansky came up just short of his second victory of the season with a solid run at Calistoga, where he coasted to the checkered flag on fumes in the #7 Big Game Treestands car. Dollansky started the California tour with a victory at Silver Dollar Speedway and is seventh in the championship standings. As the overall lap leader, there’s little doubt more wins will come his direction.

Paul McMahan continues to be the series point man when it comes to time trials. The California native who now lives near Nashville, Tenn., has been quickest in four of 12 time trial sessions (including qualifying at postponed event in Hanford, Calif.). He also established an incredible record of 12.569 seconds at half-mile Volusia Speedway Park on the night before the season started. McMahan is still searching for his first win in 2011 but should find victory lane soon in the #83 HR Cattle Kasey Kahne Racing with Roth Motorsports car.

Cody Darrah continues to impress with his aggressive and wide open driving style in the Kasey Kahne Racing #91 Great Clips car. A native of Red Lion, Pa., Darrah brought crowds to their feet across California and has managed to rack up four Top 5’s and five Top 10’s in his quest to win the Kevin Gobrecht Rookie of the Year Award.

Lucas Wolfe has quietly positioned himself in the Top 10 with six Top 10 runs, including an eighth-place finish at Calistoga. Wolfe is no doubt excited to return April 16 to I-55 Raceway, where he and Meyers went wheel-to-wheel at the checkered flag in the Ironman 55, coming up a couple of inches short of his first World of Outlaws victory in the #5w Allebach Racing car.

Kraig Kinser continues to get acclimated to the Lonnie Parsons owned #6 Casey’s General Store entry. He has one pole award and has a Top-5 finish to go with four Top 10’s through the eleven events in 2011. A past winner at I-55 Raceway, Kinser aims to build on his success as he gets closer to his hometown of Bloomington, Ind.

Chad Kemenah had a very strong showing at Calistoga Speedway to end the Spring Break tour on a high note. Kemenah led the first two laps of the feature and now has led 10 laps this season in the #63 Golden Flavored Sesame Sticks entry. He is solidly in the top 15 as the series heads to the Midwest.

Bill Rose is aiming to give Cody Darrah a run for his money when it comes to the Kevin Gobrecht Rookie of the Year Award. Rose is still searching for his first Top 5 but has looked strong throughout the California tour.

Ben Gregg , the 2010 Kevin Gobrecht Rookie of the Year, is looking for more success in his sophomore season with the Outlaws and has shown some flashes of brilliance, including a great run at Calistoga before mechanical woes slowed the #2B Kronik Energy machine.

Podcast: Be sure to check out the all new official Podcast of the World of Outlaws Sprint Car Series, Outlaws Unleashed, in the iTunes store or at www.WorldofOutlaws.com.

Tune in: Listen live as the Voice of the Outlaws, Johnny Gibson, calls the action at all World of Outlaws Sprint Car Series events on the DIRT Radio Network, with a number of events throughout the season being featured on the DIRTVision Cybercast. Visit www.DIRTVision.com for more information on all the features, including updated results from each night of racing as well as a chat room to interact with other fans listening to the racing action.

Blogging: Want to know what goes on after the checkered flag waves and before the next event begins? Make sure to check out the blog by World of Outlaws PR Coordinator Kyle Luetters each week at www.WorldofOutlaws.com.

On the Web: The all new Official World of Outlaws Sprint Car Series Web site is at http://www.WorldofOutlaws.com and includes driver biographies with statistics and pictures, race-by-race stats, detailed track information and race coverage, series news and team press releases.

Up next: “The Greatest Show on Dirt” heads back to the Midwest for events on Friday, April 15, at Paducah (Ky.) International Raceway and Saturday, April 16, at I-55 Raceway in Pevely, Mo.

There have been eleven World of Outlaws Sprint Car Series A-Feature events this season.